The name and face that remained invisible in the shadow of Air India’s monumental initiatives, such as Vande Bharat Mission for the repatriation of Indians stranded abroad and all-women-crew flight operations on International Women’s Day, has emerged in the public spotlight during the ongoing bidding race for Air India sale. The name and face behind a consortium of 219 Air India employees’ bid to acquire a 51% stake of the debt-ridden airline is the talk of the town these days. It is Meenakshi Mallik who has seen Air India through highs and lows during her career spanning 31 years in aviation. 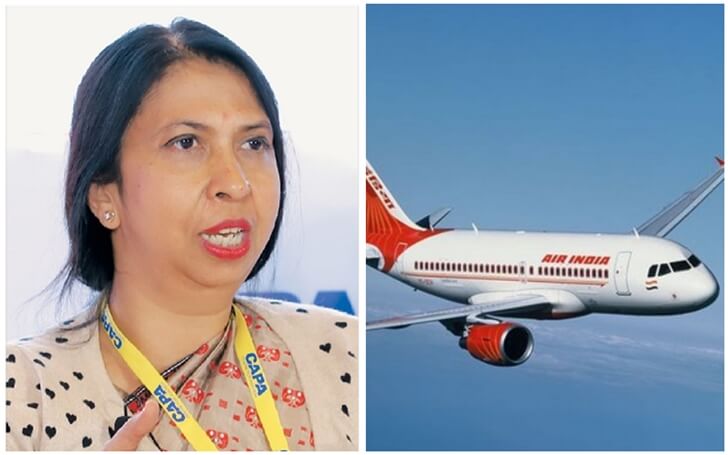 Meenakshi Mallik, 54, who took charge as commercial director of Air India Limited in June 2020, came forward to dare pilot the airline to a new high despite staunch opposition from the airline’s pilot unions. After JRD Tata, the founder, and maker of Air India, she is the only one within the company to exude bullish confidence in taking over the reins of a loss-making airline. Meenakshi Mallik who served Air India as executive director – commercial until May 2020 is one of the few who know the airline inside out.

“We know the airline inside out; we know where the problems are. We’re not bidding to win or lose; we’re doing it because we believe we can run the airline well,” she said exuberantly on December 14, the last date for the bidders including Laxmi Prasad, a US-based NRI, to file an expression of interest for Air India’s disinvestment.

On completion of her MBA studies, she joined Air India as a management trainee in 1989. She never looked back since then. Rather, she moved up the corporate ladder and joined the board of Air India as a commercial director on the strength of her vision for the airline and her leadership behind the airline’s international expansion. She did not hesitate to take charge as head of the commercial department especially when the pandemic was at its peak and the airline’s revenues took a dip.

Most of the nonstop routes, like Delhi-Seoul, Delhi-Tel Aviv, and Amritsar-Stansted generated revenues for Air India Limited under her supervision as executive director – commercial. “We re-aligned some flights like Delhi-Seoul, which we were earlier connecting via Hong Kong. It is now a direct flight, which operates four days a week and is doing very well not just in terms of passenger numbers, but also in terms of cargo carried,” she told TravTalk, a leading travel trade magazine in South Asia.

She defeated the Coronavirus infection, along with half a dozen members of her team that also contracted the virus during the execution of the VBM and air bubble flight operations worldwide.

Two pilot unions, the Indian Pilots Guild (IPG) and the Indian Commercial Pilots Association (ICPA) have accused Meenakshi Mallik of misusing her access to the insider information about the airline’s business plan in favor of her bid. Recently, the pilot unions wrote a letter urging Air India’s Chairman and Managing Director to replace her from the position she currently holds in the company; otherwise, it will amount to “conflict of interest”, according to a PTI news report.

In response to the opposition, Meenakshi Mallik said that she kept aloof from the board meet on Air India’s disinvestment and sale and that she is interested only in the day-to-day operations amid the pandemic. She added, “On November 30, I wrote to the chairman that I am participating in the bids, I will recuse myself from the board whenever any discussion pertaining to the disinvestment comes up”.

The preliminary information memorandum that the Government of India issued in January 2020 allowed the participation of Air India’s full-time directors in bidding for the airline’s strategic disinvestment. “As far as putting bids is concerned, the Government has given me the rights to bid, and I am only following that,” a media report quoted her saying.

This exclusive story is brought to you by Indian Eagle as part of the series of stories about Air India’s leading women. Harpreet A De Singh, who joined Air India as the first woman pilot in 1988, became the first woman CEO in Indian aviation recently.