Most of the US to India nonstop flights cover thousands of miles within 14 to 17 hours, which is almost 10 hours shorter than connecting flights. Simple itinerary, convenient baggage handling and less jet lag are a few other advantages of traveling to India on nonstop flights from USA. The same is the reason for the success of Air India’s nonstop flights from US cities to India. Besides, cheap air tickets to India from USA are easily available these days at premium travel booking sites including Indian Eagle, a leading international air-ticketing agency and a most trusted travel-booking partner of Indians in the US. 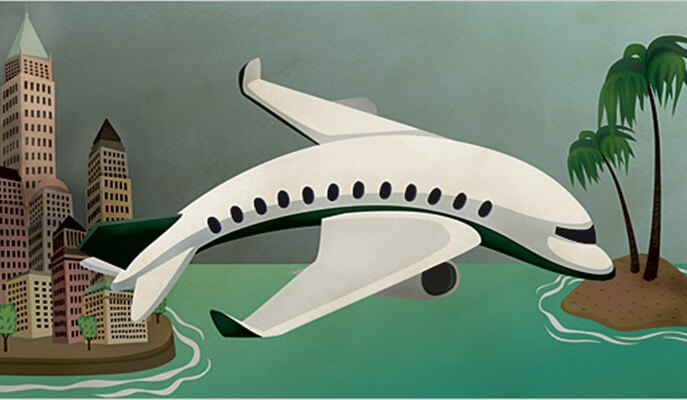 Nonstop Flights between USA and India:

Air India is all set to ring in the New Year 2021 with the scheduled launch of two nonstop routes in January: Chicago to Hyderabad, and San Francisco to Bengaluru. Both the new routes will see weekly two flights till the end of March 2021. Both Bengaluru and Hyderabad being gateways to South India, Air India is likely to continue serving these routes through 2021. Air India’s SFO to BLR flights make the first-ever nonstop service between the West Coast of the US and the Silicon Valley of India. Short domestic flights make this route easily accessible from Arizona, Utah, Nevada, Oregon, and New Mexico. Air India’s Chicago to HYD nonstop service will take effect on January 15, 2021.

United Airlines’ direct flights to Delhi from San Francisco were launched in December 2019. United Airlines got into a head-to-head competition with Air India over nonstop SFO to DEL flights, simply because Air India is the first choice for its generous check-in baggage allowance and Air India fare deals are cheaper than United flight tickets to India. While only one check-in bag weighing up to 23 kg is allowed in United Airlines’ economy class, Air India allows economy travelers to check in 2 bags; each of up to 23 kg. Besides, United Airlines charges passengers an additional fee for their preferred seats behind the Economy Plus rows on board.

As per the announcement made early this year, American Airlines is supposed to launch direct flights between Seattle and Bengaluru in October 2020. Since no tentative date has yet been announced, the proposed launch of nonstop Seattle to Bengaluru flights looks uncertain amid the current pandemic.

In an unfortunate turn of events, Air India cut its free check-in economy baggage allowance to one bag of 23 kg for all Newark to India flights in April 2019 and discontinued its JFK to Mumbai direct services. Checking in a second bag with maximum weight of 23 kg, on Air India economy flights to and from Newark, costs USD 50. However, the revision of Air India’s free checked baggage allowance for economy does not apply to Air India flights from other US cites.

Early in 2018, Delta Airlines announced its return to India with nonstop flights to Mumbai from USA .  Delta made its comeback to India with direct New York to Mumbai flights in December 2019.

In November 2018, the Federation of Indian American Associations (FIA) of Georgia presented a memorandum to Indian government seeking nonstop Air India flights from Atlanta to India for seamless connectivity to Delhi and Mumbai. Nonstop flights to India from Atlanta will benefit not only Georgia Indians, but also Indians in the neighboring states including Florida, North Carolina, Alabama, South Carolina and Tennessee. In response to the memorandum, General Vijay Kumar Singh, the Minister of State for External Affairs promised to push Air India to connect Atlanta to one or two major Indian cities for the shortest trip between Georgia, USA and India.

Booking of nonstop flights from USA to India will not burn holes into your pocket if you plan your trip at least 21 days in advance from the actual date of travel , if you fly before or after peak seasons, and if you subscribe to Indian Eagle’s free lowest airfare alerts.