Amid the ongoing Lok Sabha elections 2019, Indians got a mild relief from the overdose of political cacophony round the clock. The pleasant relief is the shortlisting of a short film on Kamali Moorthy, a 9-year-old girl, and her mother in rural India, for Oscars 2020. Directed by Sasha Rainbow from New Zealand, the 24-minute short film is named Kamali after the girl, who is the youngest girl surfer in not only Tamil Nadu, but the entire country. A couple of years ago, Kamali Moorthy emerged as a promising skateboarding sensation on the national spotlight.

The sole surfer in her village in Tamil Nadu, Kamali inspired the story of the short film shortlisted for the Academy Awards 2020. The film sensitively depicts the strengths and weaknesses of Kamali Moorthy’s single mother named Suganthi. Her difficult journey to raising her only daughter in a conservative rural setting and her struggle to make Kamali a skateboarding champion does also form the crux of the film. 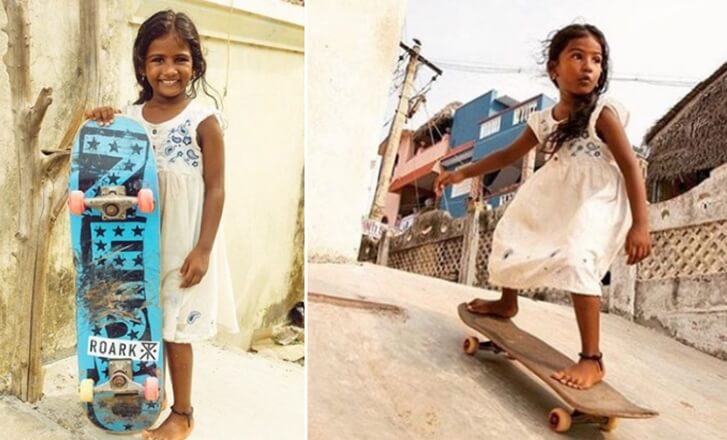 New Zealand-based filmmaker Sasha Rainbow’s Kamali is currently doing rounds at the world’s leading international film festivals and winning accolades from film critics. The short film bagged the “Best Documentary” award at the Atlanta Film Festival in April this year. Among the most popular film festivals in the United States, Atlanta Film Festival is an Academy Award-qualifying festival in Atlanta, Georgia.

Shortlisted for Oscars 2020, the film unfolds the story of Kamali’s single mother who sells fish to make their ends meet, without sensationalizing her humble background to earn public sympathy for Kamali.

The film also depicts how Kamali’s mother became an embodiment of woman power in the process of raising her, earning a living for the family, defying societal odds, and educating her to  be  skateboarding champion. How she has been an infallible support system for Kamali, is subtly woven with the story of the film. When Suganthi walks down the memory lane of her childhood, she recollects how the society did not let her do the things she wanted to do.

The story of Kamali Moorthy and her single mother went global after Kamali’s unprecedented passion for skateboarding came to the notice of Tony Hawk, a celebrated skateboarder. Tony Hawk shared a moment of her barefoot skateboarding in a humble frock. Clicked by Jamie Thomas, a photographer on his visit to Mahabalipuram near Chennai, the picture went viral from Instagram and spread like a wildfire. Kamali redefined the passion for skateboarding without a traditional skater gear.

Shot over a period of six weeks, the short film Kamali won the Best Director award at the Mumbai International Film Festival in 2018.

Though not India’s official entry to Oscars 2020, Kamali has become a reason for Indians worldwide to rejoice because of its Indian protagonist and milieu, just as the documentary “Period. End of Sentence” from the United States made Indians go gaga over its Oscan win.