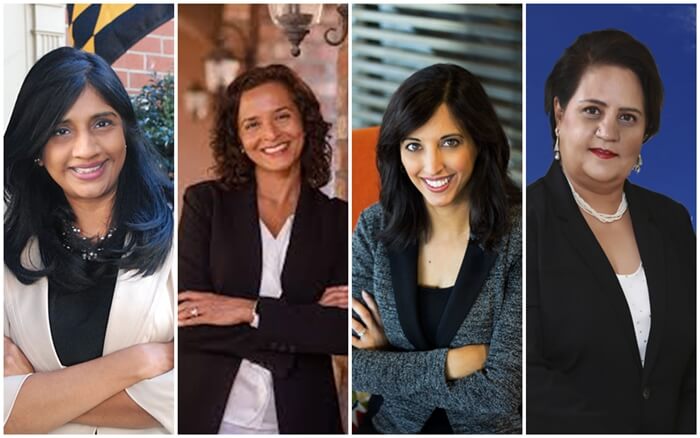 A member of the Maryland House of Delegates, Indian American Aruna Miller is all set to run for the US Congress this year. A 53-year-old Democrat, she is the second Indian American delegate from Maryland. A civil engineer by profession, Aruna Miller is also a member of the Land Use and Transportation Committee of Montgomery County in Maryland, USA. She serves on the executive board of the women legislators of Maryland too.

One of the most promising Indian American candidates for US Congress in 2018, Aruna Miller has selected jobs, economy and infrastructure as her focus areas. She came to New York from India at the age of 7 and made America her home. When she was a high school senior, she had to take a job at a fast food restaurant after her father lost his job due to a serious health problem.

A diehard animal rights advocate, Aruna Miller has established funding for rape crisis centers, implemented GPS tracking of domestic abusers, and banned the sale of e-cigarettes to underage smokers in the state of Maryland. If elected, she will replace John Delaney who has announced to run for presidential elections in 2020.

One of the most determined Indian American candidates for US Congress in 2018; Phoenix-based Dr. Hiral Tipirneni is a Democrat from Arizona’s second congressional district. Since she came to the United States from India at the age of 3, she has had an eventful journey from Cleveland, Ohio to Phoenix, Arizona, from an emergency room to cancer research advocacy.

An alumnus of Northeast Ohio Medical University, Dr. Hiral Tipirneni has worked as an emergency room physician at several hospitals in Phoenix for 20 years. Her mother was a social worker and the director of a senior care center in downtown Cleveland, Ohio. It was her mother who introduced the Meals on Wheels program in Cleveland, and encouraged Dr. Hiral to serve the community.

A member on several nonprofit boards of directors including Maricopa Health Foundation, Indian American Dr. Hiral Tipirneni is at the helm of leading teams of researchers, physicians and health advocates to treat patients of breast cancer, prostate cancer and childhood leukemia. She was the chief organizer of a TEDx event focused on positive changes in the Northwest Valley.

Among the Indian American candidates for US Congress in 2018 is Anita Malik, a digital media entrepreneur and a Democrat. A former journalist, Anita Malik is running for a seat in the US Congress from Arizona’s 6th Congressional District. Indian American Anita Malik believes that fair tax reform is a must to level the playing field for both small businesses and individuals in Arizona. Gender equality at workplace and low-cost health coverage for everyone will also be on her agenda.

Born in Kansas City, Missouri and brought up in Arizona, Anita Malik is a graduate in information technology and finance from Arizona State University. She is a mentor to women in marketing and an advocate of affordable childcare programs. She will be using her content marketing experience, story-telling power and digital media knowledge to support the collective voice of all South Asians in her campaigns.

Apart from working with several tech startups and government agencies, Anita Malik instituted East West Magazine, a national publication for the Asian American community. One of her recent achievements is ListenforHer, a tool to help women at work. She believes in leading by listening and solving problems by uniting resources.

One of the Republican Indian American candidates for US Congress in 2018, Vandana Jhingan is a journalist, community activist and business woman. Based in a Chicago suburb, she is the Midwest Bureau Chief of TV Asia, an Indian American cable network. She is supported by Indians in Illinois, and the Republican Hindu Coalition, a most powerful Hindu organization in the US.

Vandana Jhingan will contest against Indian American Democrat Raja Krishnamoorthi. She promises to bring jobs, fiscal responsibility and firm foreign policy to the state of Illinois and the USA at large. Indian American Republican Vandana moved to the United States from India in pursuit of her American Dream, on completion of her business administration studies in New Delhi.

“I have demonstrated my commitment by serving the community for more than 20 years. I will serve as tireless advocate for the people and businesses of my district. I promise that I will handle these issues with the utmost integrity and responsibility,” said Vandana Jhingan in a statement of her candidacy.

Travel Beats is a leading Indian American portal by Indian Eagle, a trusted travel partner of Indians in USA booking their cheap air tickets even for last-minute flights to India. Subscribe to Travel Beats’ free newsletter for the latest immigration, visa, air travel and community news.