Five Indian American teenagers are among the top 10 awardees of the 2017 Regeneron Science Talent Search Competition, one of the most popular science contests in the world. Indrani Das, a 17-year-old Indian girl from New Jersey, won the ‘Junior Nobel’ award, which this science talent search competition is also known as, and bagged a whopping grant of $250,000 in addition. Indrani Das was felicitated along with other 39 finalists by the committee comprising some of the best in the field of science and technology. 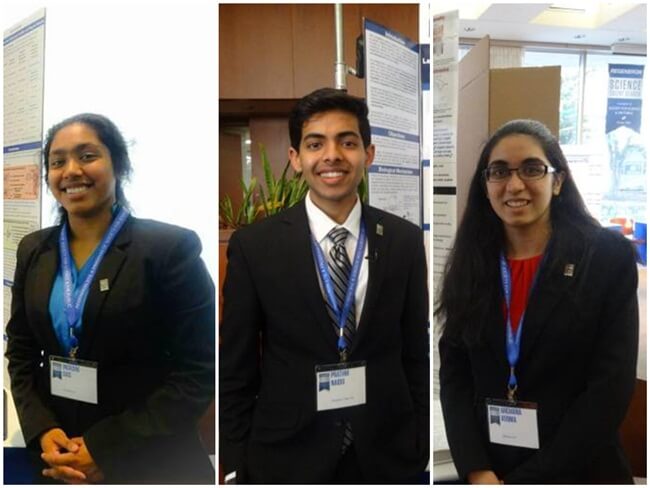 New Jersey-based Indian American Indrani Das was awarded $250,000 for her intensive study of a new approach to treating the death of neurons in the brain, which results from brain injuries and which causes neurodegenerative diseases like cerebral attack, and Alzheimer’s or Parkinson’s diseases. The winner of the Junior Nobel Prize 2017, Indrani Das demonstrated how the cerebral neurons can be saved, using a laboratory model.

The death of neurons in the brain is called Astrogliosis in medical science. Astrogliosis is a cerebral condition caused by an abnormal increase in the growth of the brain cells called astrocytes as a result of some infection or injury or trauma to the brain. Glutamate, a toxic substance, secretes more and more due to the reduced functionality of astrocytes. Excess glutamate destroys neurons in the brain, thereby causing neurodegenerative diseases.

The second prize of the 2017 Regeneron Science Talent Search Competition went to an 18-year-old American teenager. Arjun Srinivasan Ramani from Indiana, an 18-year-old Indian American boy, bagged the third prize of $150,000. Arjun worked on a project about network analysis among social media users. He developed an algorithm to analyze different patterns of user behavior on Facebook and identify potential physical issues like neurological disorders among the users. He emphasized that early diagnosis of diseases leads to early treatments.

17-year-old Archana Verma from New York is another Indian American finalist of the 2017 Regeneron Science Talent Search Competition. She received a grant of $90,000 for her project on chemistry behind energy efficiency. A student of Jericho Senior High School in New York, Archana Verma studied on where the energy that window panes absorb from sunlight goes. She is looking to convert window panes into a solar energy source.

Among the five Indian American awardees of the Regeneron Science Talent Search Competition in 2017, Prathik Naidu from Virginia developed a software application to identify new cancer therapeutics as alternatives to chemotherapy. The Massachusetts General Hospital has started using the software to analyze new aspects of cancer genome in the human body in a pilot program. Prathik Naidu is a senior student of Thomas Jefferson High School in Alexandria.

17-year-old Vrinda Madan from the Indian community of Orlando walked away with a $50,000 award for her project on effective treatment of malaria. One of the young Indians in the US state of Florida, Vrinda found that the existing drugs of malaria are gradually losing their effectiveness to the increasing resistance of plasmodium parasite, which is transmitted to the human body through bites by infected mosquitoes. She has been trying to create compounds which can be used in drugs to fight the malaria-causing parasite.