After every dark night comes a bright morning since change is inevitable. Gursoach Kaur having been appointed as the first Indian American Sikh turbaned female officer in the New York Police Department reminds us at Indian Eagle of the motivational maxim. A graduate of the New York City Police Academy, Gursoach Kaur is a beacon of hope, honor and glory for the entire Sikh community in the United States.

Appointed as an Auxiliary Police Officer (APO) of the New York Police Department, Gursoach was inducted into the state’s law enforcement. It sent positive vibes across to the Sikhs in America, who have been looked down upon for wearing turbans and beard post the 9/11 attacks on the World Trade Center complex in New York. 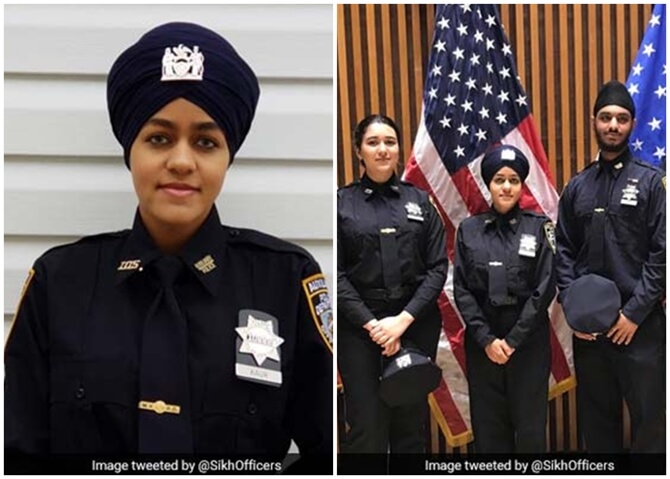 In a Facebook post, the Sikh Officers Association, the United States’ first organization representing Sikh Americans in Law Enforcement, welcomed her and described her appointment to the NYC Police Department as a matter of pride. The Minister of State for Housing and Urban Affairs, Hardeep Singh Puri took to twitter and eloquently said that a turbaned lady police officer would help correct the prevailing wrong perceptions about Sikhism and Sikhs in America.

In his congratulatory tweet for Gursoach Kaur, Mr. Hardeep Singh Puri referred to the 2010 incident of harassment at Houston International Airport. The then ambassador to the United Nations, Mr. Puri was held back by the Houston Airport officials at the security checkpoint and told to remove his turban. His refusal to do so made the security officials keep hold of him for over 30 minutes. An accompanying Transportation Security Administration (TSA) personal’s intervention got him released.

Canada’s Minister of Innovation, Science and Economic Development, Navdeep Bains faced a similar incident at Detroit Metro Airport in 2017. He was asked to undergo additional security checks for wearing a turban before he boarded his return flight from Detroit to Toronto.

However, the appointment of Gursoach Kaur as the first female turbaned Sikh officer is a result of the New York Police Department’s generous policy to respect the minority community officers’ faith and religious sentiments. In December 2016, the NYPD revised the policy to allow the Sikh officers to wear turbans and recruit more from the minority communities, thereby promoting inclusiveness in the state’s law enforcement. The NYPD had 160 Sikh officers as per the estimates in 2016.

Since post September 11 attacks in the US, the Sikhs Americans have been striving to mitigate hate crimes against them (turban-clad men) by organizing campaigns and meetings to sensitize people about the message of Sikhism. Recently (earlier in May 2018), the Sikhs of Ohio got together at a public square in Cleveland, held discussions on the values of Sikhism and distributed food to passers-by and onlookers as part of the Vaisakhi celebration.