Young Indian Americans are making challenging strides to create positive impact in different walks of life from international talent competitions to the United Nations. Recently, Indian American Judith Monickaraj won the 2018 Girl Scout Gold Award of the nation for her humanitarian service to rural Indian women. Currently in the spotlight of media are three Indian American girls who have been selected as ‘Girl Up’ advisers for the upcoming United Nations Women Empowerment Summit in Washington DC.

Though the United States pulled out of the United Nations Human Rights Council, certain sections of the US people continue to support the UN policies for community welfare. The three Indian American teenage girls are Kavita Rai of California, Anusha Tandon of Massachusetts, and Ina Bhoopalam of Nebraska. They will join the committee of other 21 ‘Girl Up’ advisers for the United Nations Women Empowerment Summit which will continue for 4 days from July 8 until July 11. 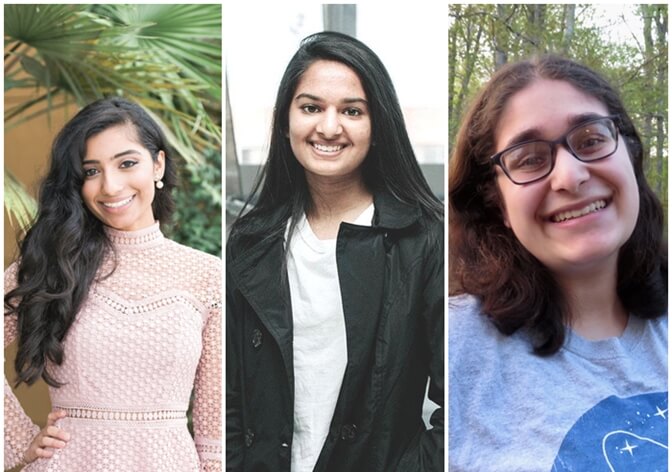 The UN Women Empowerment Summit in Washington DC seeks to improve the lives of underprivileged girl children across the world through collective efforts by the ‘Girl Up’ advisers. ‘Girl Up’ is an empowerment campaign by girls for girls, initiated by the United Nations Foundation. The 24 ‘Girl Up’ advisers including the three Indian American girls will speak on various issues affecting the lives of girls and women, at the summit.

A resident of Camillo in California, Kavita Rai is a would-be senior at Newbury Park High. She joined the United Nations Foundation’s ‘Girl Up’ campaign and introduced a chapter at her school 2 years ago. But she has been advocating for women’s rights to dignity, gender equality, equal payment, etc. for years. Kavita is also associated with the YMCA Youth and Government where she actively participates in debates and discussions on prison reform and gun control.

17-year-old Anusha Tandon of Acton in Massachusetts joined the ‘Girl Up’ campaign when she was a sixth grader. A meritorious student of Boxborough Regional High School in Acton, she strives to be an agent of change for other girls in need. She led the foundation of a club in her middle and high school, where she played pivotal roles in several campaigns. Being a music enthusiast, Anusha attends classes on Hindustani Classical music.

One of the Indian American teens among the 24 ‘Girl Up’ advisers for the United Nations Women Empowerment Summit, Ina Bhoopalam is a budding activist for good reasons. A student at Lincoln’s East High School in Nebraska, Ina joined the ‘Girl Up’ campaign over a year ago as she found it the platform to advocate for what she believes in. She made hundreds of youth join her chapter in Lincoln within a few weeks from the time she started it. She fights for women’s rights to gender equality.

The 24 advisers including the three Indian Americans have been selected out of some 400 girls from 17 US states and 5 countries, who are active members of the ‘Girl Up’ campaign in their respective cities. Each of the ‘Girl Up’ campaign members and advisers is an agent of change on the mission of fighting issues related to women’s rights to gender equality, education, decent living and equal wages. They help raise fund for the United Nations’ various programs.