It has been six years since the US postal service released a Diwali stamp in 2016. Diwali is still not a federal holiday for the growing Indian American Hindu community – the highest-earning ethnic group – that is central to the US politics, healthcare and economy. The Biden administration has appointed a record 130 Indian Americans to key offices and roles for the socio-economic growth of the nation. In the US, Indian American CEOs are at the helm of large to medium sized companies with an estimated market value of over $6 trillion. Indisputably, Indian Americans’ collective talent, expertise and leadership matter; but their demand for a federal holiday on Diwali is still unheard of.

On the eve of #Diwali2021, a group of influential US lawmakers including Congressman Raja Krishnamoorthi and Congresswoman Carolyn Maloney introduced the Deepavali Day Act in a bid to get Diwali declared as a federal holiday. Espoused by other Democrats in the House of Representatives, the new legislation will help mobilize the government towards recognizing Diwali not as an ethnic festivity, but a celebration of light over darkness. 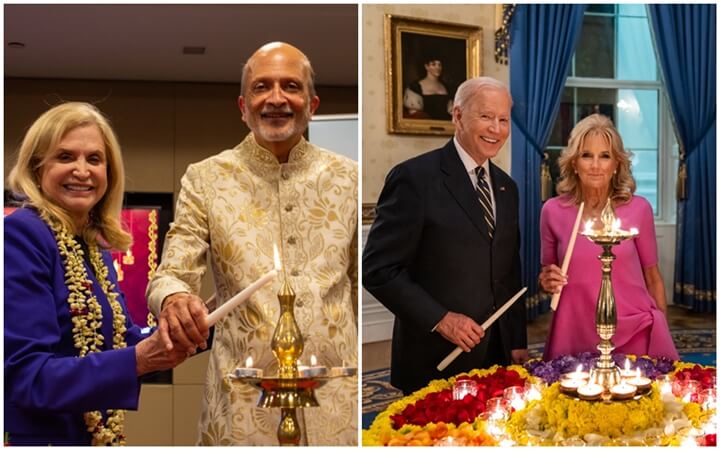 While addressing a gathering of Indian American community leaders and activists, Carolyn Maloney, who was instrumental in the process of releasing the commemorative Diwali stamp, said, “Celebrations like Diwali speak to the core of what we all desire our nation to be: a beacon of happiness, healing, learning and light in uncertain times. There is no better time to enshrine Diwali as a federal holiday than in the wake of this dark pandemic”. She chairs the powerful House Oversight and Reform Committee in addition to serving New York’s 12th Congressional district.

“It’s very appropriate that the world’s largest democracy and the world’s oldest democracy are such good friends and allies”, said Maloney, a staunch advocate of the India-US relations. In September 2021, Carolyn Maloney revived the bill, HR 5022, to honour Mahatma Gandhi – the Father of the Nation – posthumously with a Congressional gold medal in recognition of Gandhiji’s steadfast pursuit of ahimsa and satya (non-violence and truth).

The legislation, Deepavali Day Act, is cosponsored by four Indian-origin Democratic members of Congress – Raja Krishnamoorthi of Illinois, Pramila Jayapal of Washington, Ami Berra and Ro Khanna of California. Raja Krishnamoorthi who has been vocal against the green card backlog and about the tax-paying Indians’ rights to equality in a democratic nation described the bill as a fitting tribute to the contributions that the Indian-origin population of four millions continue to make to America. He prided himself on joining Carolyn Maloney in introducing the Deepavali Day Act.

“An official holiday on Diwali would be the best gift that Indian Americans have ever received in the United States. Diwali is a school holiday in school districts of a few US states, including New York and New Jersey though. A majority of them celebrate Diwali in the US, as they travel to India during the Christmas holiday. Furthermore, the proposed recognition of Diwali as a federal holiday will help strengthen the US-India ties,” said the Editor of Travel Beats, a leading Indian Diaspora and travel news portal by IndianEagle.com.

One thought on “Deepavali Day Act: New Legislation to Make Diwali Federal Holiday for over 4-Million Indian-origin People in USA”