Gone are the days when we would miss and crave our favorite Indian street food overseas. With the explosion of Indian population abroad over the past two decades, every bit of India is available in the US, Canada, the UK, Australia and Singapore these days, except ‘maa ke haath ka khana’. Just as Indian restaurant Tailor in Tennessee offers Dal Bhat – a most traditional staple in Indian households – with a fusion on its menu, a decade-old Indian restaurant in North Carolina serves the most popular Indian street food items at economical prices. 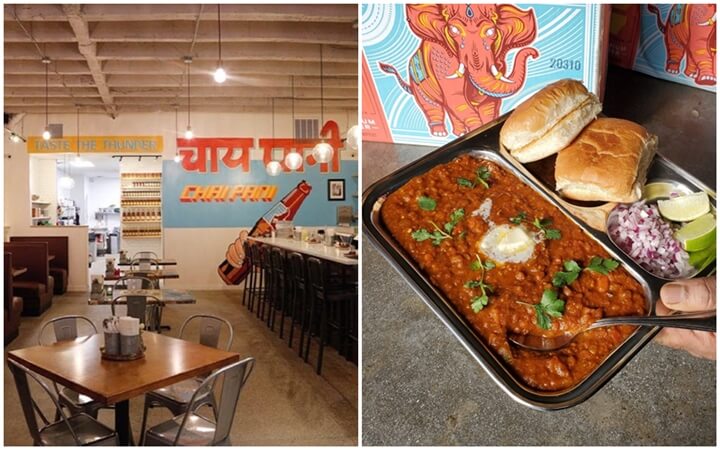 Chai Pani located in Downtown Ashville in North Carolina has been named the most Outstanding Restaurant in the US and honored with the James Beard Foundation Award in Chicago this Monday, much to the pleasure of desi food lovers across America. Notably, the James Beard Foundation Award is recognized as the Oscar of food in the US. Emotions are running high for more than 4 million Indian immigrants in the US over the ‘best restaurant in America’ title bestowed to Chai Pani leaving its native American counterparts high and dry.

The phrase ‘Chai Pani’ is an exemplary pun given its colloquial interpretations in India. It is the basic culinary arrangement for a guest in every Indian household. It also refers to bribe in the Hindi-speaking regions of India. Whatever the colloquial connotations are, Chai Pani signifies traditional Indian hospitality that has been passed down from generation to generation as a most fundamental value.

Drawing upon India’s street food landscape and traditional homecooked meals, Chef Meherwan Irani – the owner of ‘America’s most Outstanding Restaurant’ Chai Pani – opened the first outlet in downtown Ashville in 2009. Cashing in on its success and popularity, he went on to expand the bandwidth with more eight restaurants across Charlotte and Atlanta. Spicewalla, a sister concern of Chai Pani, is a favorite addon to desi kitchens in America.

From Ashville to Atlanta, Chef Meherwan Irani’s Chai Pani has been tantalizing hundreds of thousands of taste buds with Chaat – the king of Indian street food – in a country with ‘food on the go’ culture. Chaat, the curtain raiser at Chai Pani outlets in the Southeast US, is a crunchy, spicy, sweet and tangy snack. Inspired by the season-specific street flavours of India, the menu features Bhelpuri, Corn Bhel, Aloo Tikki, Sev Dahi Puri, Green Mango Chaat, Pakoras (fritters), and Sweet Potato Chaat among the bestsellers.

There are Pav Bhaji and Vada Pav that remind Indian expats of binge eating of these street snacks in Mumbai during a day out or a shopping spree and on rainy days. The chef’s signature dish on the menu of America’s most outstanding restaurant in North Carolina is Julienned Okra Fries (Kurkure Bhindi) tossed with salt and served with a lime wedge. Chicken Pakora and Crispy Masala Fish Roll on the menu woo the Bengali palate that is fond of non-veg street food. Among the bestsellers at Chai Pani in Ashville and Atlanta, Keema Pav is reminiscent of the flavor found in the narrow lanes of Old Delhi. Mixed Vegetable Uttapam and Tomato & Cheese Uttapam with a variety of toppings, are the most delicious South Indian crepes on the menu.

Be it festival or food, India rocks everywhere. When America got the first Indian restaurant, is still a popular debate. According to some sources, the first brick-and-mortar establishment catering Indian food to the American taste buds was set up in the US in the 1920s. Some other sources suggest that America saw the opening of the first Indian restaurant in the mid-1960s. The contemporary foodscape of America is dotted with around 80,000 Indian restaurants; some offering authentic delicacies of India and some serving Indo-American fusions. It is simply overwhelming.

If you are badly missing the street food that you grew up savoring in India, it is wise to visit an Indian eatery in the vicinity of your neighborhood rather than spend a lump sum for booking international flights to India given the insanely high airfares at present. You can subscribe to the fare alert of IndianEagle.com, a most trusted air-ticketing partner of Indians in America, and grab the best deals whenever air ticket prices plunge.