Craving for the taste of ultimate adventure? Visit Bhangarh Fort in Rajasthan. One of the most haunted places in India; Bhangarh Fort is a hotbed of paranormal activities. Though landscaped by greenery, the fort sends shiver of fear down the spine even in broad daylight. The desolate Bhangarh Town is like a heath on the colorful canvas of Rajasthan. Among the historic forts of Rajasthan, the dilapidated Bhangarh Fort is an aloof entity. Despite its isolation from the civilization, the fort is a popular offbeat tourist attraction especially because of the age-old haunting stories which describe Bhangarh as one of the most haunted sites in the world. 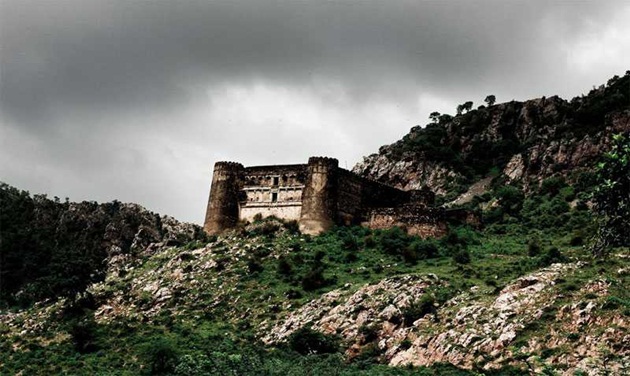 It is said that Bhangarh lost its beauty, prosperity and people because of a curse. Among the popular stories of the curse, one story states that King Madho Singh was the founder of Bhangarh. He sought approval from ascetic Guru Balu Nath before he laid the foundation brick in 1613. The ascetic had his seat of meditation near where the fort is located. Guru Balu Nath allowed Madho Singh to found the town, on a condition that the shadow of the king’s palace should not reach out to the hermit’s shelter. He warned that the moment it would happen, the whole town would be reduced to ruins. One of Madho Singh’s descendants turned a deaf ear to the warning and raised the height of the palace to such a level that it overshadowed the ascetic Balu Nath’s humble shelter. As a consequence, his prophecy became true in form of curse, which caused devastation of Bhangarh Town.

Most Offbeat Places to Visit in India

According to the rural folks in the surrounding areas, Guru Balu Nath’s curse is so strong and effective even after so many years that whenever a construction is made within the border of the town, it collapses in the dead of the night. Evidently, the town and the fort are steeped in eerie silence. It is also said that whoever dared to stay in the town and penetrate the mystery of the fort after sunset did not return alive.

Another popular myth of Bhangarh Fort is linked with the story of Ratnavati, the Princess of Bhangarh. The legends of Bhangarh say that she was very beautiful. Her charming beauty caught the fancy of many princes and nobles of that time. The talk of her exceptional beauty spread so far and wide that she began to receive marriage proposals from the princely states of Rajasthan and other parts of India, at the age of 18. A local wizard named Singhia (tantric, a man with knowledge of black magic) too was smitten by the bug of love to see her. He was aware of the impossibility of marrying Ratnavati because of his socio-economic difference with her.

One day Singhia noticed the princess’ maid purchasing perfume in the market. He instantly thought of an idea to ensnare the princess. He applied a trick on the maid and replaced the perfume with some magic potion so that the princess would be overpowered by the enchanting aroma and would come to him under the influence. But the things did not happen according to his plan. Luckily the princess caught notice of the wizard when he was replacing the perfume with the magic oil. She threw the bottle towards him. It broke and the oil spread on the ground. That part of the ground turned into a boulder, which caused his death. The wizard cursed the fort to desolation while taking his last breath.

The Great Wall of India in Rajasthan

A battle between Bhangarh and Ajabgarh followed this incident. The battle hurled severe blows to Bhangarh Fort. Then, the Mughals invaded Bhangarh and caused further damage which the fort could not survive. The inhabitants of the fort including the princess were killed. The present dilapidated condition of the fort is believed to have resulted from the wizard’s curse. Today, Bhangarh Fort is supposed to be the abode of the ghosts of the princess, the wizard and others. Supernatural activities in and around the fort have been reported by the locals, several times.

That is why Bhangarh Fort has been declared a forbidden haunted spot, and entry to the fort is prohibited after sunset. The stories of Bhangarh Fort are likely to end with a popular belief that Princess Ratnavati has been reborn somewhere else in Rajasthan, and that only her return can put an end to the curse on Bhangarh.

Bhangarh is about 300 km away from New Delhi. Make a trip to this haunted place when you travel to India the next time. Book cheap flights to New Delhi from USA on IndianEagle.com.