An Indian immigrant family has become the talk of social media for its super fan moment with none other than Amitabh Bachchan in the US. Though admired by millions of fans at home and abroad, the ‘Sholay’ actor has received the most offbeat tribute from the Sheth family in New Jersey. Gopi Sheth and his wife Rinku Sheth have taken the internet aback by unveiling a life-size statue of Senior Bachchan at their new residence in Edison, NJ. 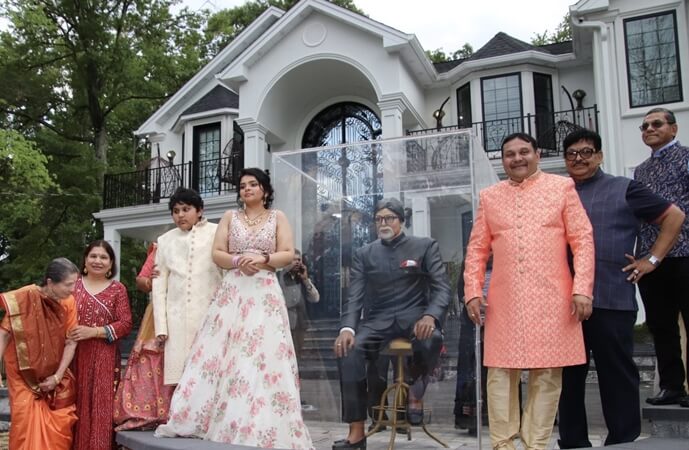 The statue of Amitabh Bachchan in New Jersey is modelled on the ‘Kaun Banega Crorepati’ host played by the 79-year-old actor. Enclosed in a glass box, the statue is sitting on a chair and wearing an Indian ethnic outfit in black. Indian American Gopi Sheth organized an inauguration ceremony on August 27, and it was attended by more than 600 people from the local Indian community. The grey-bearded statue gives the impression from a distance that Big B himself is sitting there.

The Bachchan statue at the Sheth residence in Edison was sculpted in Rajasthan. Gopi Sheth, an Internet security engineer by profession, spent a whopping US$ 75,000 on the statue and its shipping from India. Self-confessed fans of the legendary actor, Gopi and his wife said that the Shehenshah of Bollywood is nothing less than a god to them.

“We grew up watching his movies in India. Though a behemoth of Indian Cinema, he is very down-to-earth unlike other stars. He is not just a versatile actor but also a great philanthropist. He takes care of people around him. Everything about him; his on-screen charisma, his real-life personality, his baritone, the way he communicates…is worth admiring. Amit ji who has inspired many people like me to make it big in life deserves to be immortalized. I could not think of other tributes than dedicating a statue to him,” said Gopi Sheth who migrated to the US from Gujarat in 1990.

However, there is a mixed response to the Indian American family’s tribute to Amitabh Bachchan. Some netizens have gone gaga over the statue and lauded it as a new attraction to behold in New Jersey; whereas others have criticized the Sheth family for misspending $75,000 on a statue and opined that the money could have supported humanitarian purposes like education of poor children. Some others are louder in calling it a mere display of opulence and saying that placing the statue outside the house is an act of disrespect to the actor. Many Indian expats from Atlanta, Charlotte, Detroit, Boston, and even from San Francisco as well as Seattle took to Twitter to defend Gopi Sheth against the criticism.

“I am not surprised at this. Kolkata has a temple dedicated to Amitabh Bachchan – which is more offbeat than the Sheth family’s tribute to their god-like actor. Visitors are treated as devotees and greeted with ‘Jai Amitabh Bachchan’ at the temple where Big B is the presiding deity. Located in South Kolkata, the Amitabh Bachchan Temple displays hundreds of his pictures from his filmography and performs daily rituals to worship his idol placed on an altar. Sanjay Patodiya, the the temple owner, does social work in the name of his favorite actor,” said Sourav Agarwal, the Editor of Travel Beats.

Travel Beats is an overseas Indian community portal by Indian Eagle, a leading travel-booking partner of Indians in North America. Indian Eagle not only gets you discounted flight tickets to India, but also latest immigration, visa, air travel, and Indian Diaspora news through its free newsletter.