Indian American Abeer Dey, a 4th grader, made headlines for what many others, rather older than him, race to achieve. He has been selected as a junior mayor in the state of Maryland. At the mayor and city council meeting, Gaithersburg, a city in Maryland, declared Abeer Dey as the next junior mayor. His selection happened through an essay competition that saw more than 50 entries from Gaithersburg. Abeer’s swearing-in was virtually officiated on June 21. 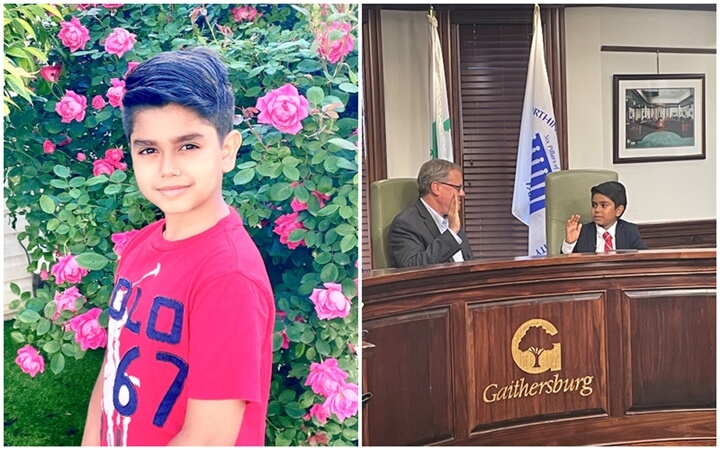 “It’s important that we provide opportunities for our youth to learn about municipal government and how it impacts their lives every day,” said Mayor Jud Ashman. “Abeer is following in the footsteps of a long line of young Junior Mayors who have had an opportunity to experience local government in a unique way, and we’ve appreciated what they’ve taught us in the process,” said Jud Ashman, Mayor of Gaithersburg. Students are asked to describe what change they would like to see or bring in for a better community.

The annual essay competition for selection of a junior mayor is intended to inculcate lessons on municipal governance to young minds and help them grow into responsible citizens. “Teamwork through Flexibility, Respect, Leadership and Civility” was the theme of the “If I were Mayor…” essay contest this year. The Maryland Municipal League and the Maryland Mayors Association invite fourth graders, irrespective of their nationality or cultural background, to pen and submit essays expressing what they would like to do if they are appointed a mayor.

In his essay, Abeer Dey took on bullying and described the ways to curb it as the next junior mayor of Gaithersburg, Maryland. Bullying of kids in schools is what bothers him. He wants to work with community members, teachers and parents to address the problem at its root. The following is an extract from the essay:

“Bullying in schools is a very serious problem and it causes a lot of distress for students. Hence, I want to solve this issue by implementing a few measures, such as increasing the number of teachers at the playground during recess, to be more vigilant and intervene quickly if they see someone getting bullied. I would set up cameras around the school premises which are blind spots and may lead to bullying activities. There should be a station at the playground where kids can go and report their grievance if they are being bullied. The station should always have a teacher present who can listen to the students and help them. The teachers should also talk to the kids who are bullying and try to find out about their behavior and talk to their parents if necessary. In conclusion, I think that implementing these measures would help to solve the issue of bullying and make all the students very comfortable and relaxed in schools, which in turn would help them focus on their studies. As a Junior Mayor, I would like to help you to bring a stop to this major issue and make our schools a better place.”

Interview of the participants is part of the selection process, in addition to the essay. Being junior mayor, Indian-origin Abeer Dey will also be given the charge of a community service project at his Rachel Carson elementary school. The city council and mayor will assist him on this. Maryland-based Abeer is now a member of the elite club of young achievers just like these two Indian American brightest students in the world.