Now a few more frowning brows will cast a questioning glance at the unprecedented success of Indian American teens in the National Brain Bee and Spelling Bee contests as six Indian American school goers made a clean sweep of the top awards including championship in the 2018 Scripps National Spelling Bee competition held at National Harbor in Maryland.

14-year-old Karthik Nemmani from Texas is crowned the champion of the 2018 Scripps National Spelling Bee only to double the celebration for Indian communities in the United States. Recently, three Indian American teens including the winner Venkat Ranjan of California made it to the top of 10 finalists in the 2018 National Geographic Bee competition. While the moments of their triumph are yet to recede from the memory of Indians in America, the sweeping of top six awards in the Scripps National Bee by young Indian Americans is overwhelming. 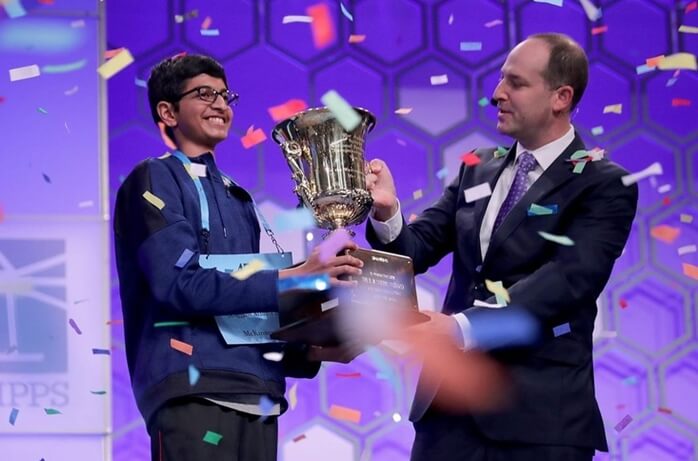 The top three out of the 6 Indian American winners of the 2018 Scripps National Spelling Bee are from the suburbs of Dallas, Texas. They are Karthik Nemmani of McKinney, Naysa Modi of Frisco and Abhijay Kodali of Flower Mound. The fourth, fifth and sixth finishers are Jashun Paluru of Indiana, Navneeth Murali of New Jersey and Sravanth Malla of New York respectively.

An 8th grader at Scoggins Middle School in McKinney, Karthik Nemmani won the 2018 Scripps National Spelling Bee by spelling out ‘Koinonia’ and ‘haecceitas’ correctly. He bagged the most coveted trophy worth $2500, a cash prize of $40,000, a complete reference library from Merriam-Webster and other prizes. Frisco-based Naysa Modi lost out the championship to Karthik by misspelling ‘bewusstseinslage’ (a state of consciousness) in the most gripping finale and got the second award, cash prize of $30,000.

A cash prize of $20,000 was awarded to Abhijay Kodali in the third place. The fourth finisher, Jashun Paluru of Indiana received $10,000. In the fifth place, New Jersey-based Navneeth Murali was rewarded with $5000. New York’s Sravanth Malla was given $2500 for the sixth position.

It was Naysa Modi who topped Karthik Nemmani at the county level of the Scripps National Spelling Bee 2018. That’s why Karthik uninhibitedly said, “Naysa is an amazing speller. She deserves the trophy as much as I do. However, I got lucky,” holding the trophy with both of his hands. ‘Ankyloglossia’, ‘Shamir’, ‘Passus’, ‘Cendre’, ‘Jaguey’ ‘Condottiere’ and ‘Grognard’ were some of the other words which Karthik spelled confidently and correctly in various rounds of the finale.

Even the spelling of words like ‘Telyn’, ‘Lophophytosis’, ‘Videlicet’, ‘Ochronosis’, ‘Succiniferous’, ‘Lochetic’, ‘Pareidolia’ and ‘Forcat which Naysa spelled precisely in the championship rounds would be a mind-boggling experience for myriads of young minds.

While the 519 participants at the national level of the 2018 Scripps National Spelling Bee included more than 150 Indian American spellers, there were 21 spelling whizzes from the Indian community among the final 41 on the stage. Out of the 16 spellers who appeared in the championship round, 11 were Indian American teens.

For the 11 consecutive years, Indian American kids ruled the roost in Scripps National Spelling Bee contests, raising multitudes of eyebrows in wonder, which has been decoded in ‘Breaking the Bee’, a documentary on the mystery behind the success of Indian American students in spelling bee competitions. The 2018 Scripps National Spelling Bee winner Karthik Nemmani is the 14th consecutive champion from the Indian American community and 19th among the total 23 winners. It was 12-year-old Ananya Vinay of California who won the trophy in 2017.