Asia’s biggest slum is all set to get a makeover. Yes, we are talking about India’s Dharavi which is the world’s most densely home to 1 million slum dwellers in Mumbai City. The name “Dharavi” brings up the repelling images of congestion, suffocation, dust and garbage to our minds after the portrayal of this Mumbai slum in several documentaries and feature films including the Oscar-winning Slumdog Millionaire.

“Dharavi is getting a makeover,” sounds surprising to many of us because it is the only place in Mumbai which has grown but not developed over the years. Dharavi will play host to the world’s first slum museum in February 2016. Titled “Museum Dharavi,” it will be a mobile exhibition on the go across India showcasing the never-seen bright aspects of Dharavi slum dwellers. 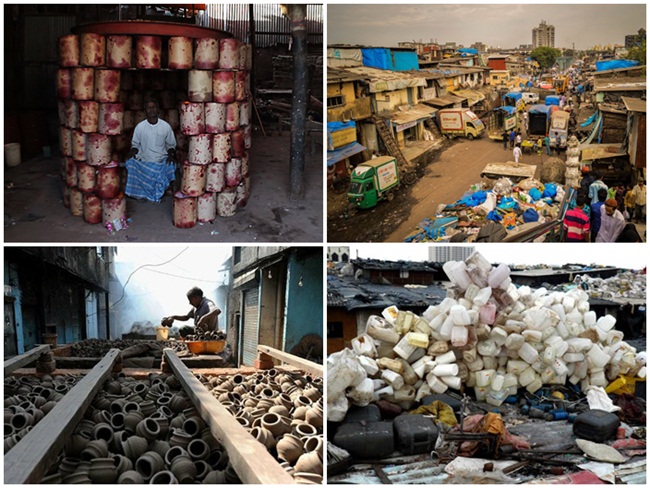 The first of its kind, the slum museum will show the world the other side of Dharavi replacing the age-old images of the slum stereotyped as one of the worst places in India. The project “Design Museum Dharavi” is aimed at highlighting how the slum dwellers of Mumbai contribute to economy, how important a role they play in recycling of waste, how arduous work they do, etc.

An initiative by artists Jorge Manes Rubio from Spain, Matias Echanove, Amanda Pinatih and Rahul Srivastava, the world’s first slum museum on wheels will project Dharavi as the most productive hub of plumbers, electricians, carpenters, goldsmiths, garbage collectors, potters and others in Asia. For the first time, the world will see how capable and creative the dwellers of Dharavi slum are despite incredibly tough living conditions.

Once one of the islands that Mumbai City is built of; Dharavi has a residential unit and an industrial unit. The world’s first slum museum Dharavi will bring the hidden talents in the filthy alleys of this Mumbai slum to our notice. The collective production in the industrial unit of Dharavi is equal to a billion dollar industry. The industrial section of Dharavi Slum, though congested, chaotic, seedy and shabby, houses more than 7000 different small businesses and 20000 single-room factories.

The Dharavi Slum Museum will show how recycling became the most thriving business generating revenue from the discarded waste of Mumbai’s 21 million citizens. The small-scale industries of Dharavi manufacture leather goods, plastic containers, clay pots, embroidered garments, etc. for small and international markets. The estimated annual turnover of over US $665 million is one of the most interesting facts about Dharavi in Mumbai.

In 2010, Britain’s Prince Charles mentioned Dharavi as a role model of sustainable living for the relentless pursuit of recycling waste.

If you visit Dharavi Slum tomorrow, you will surely find open sewers and dirty lanes with strewn rubbish as the living conditions have remained the same. However, the small and medium size businesses of Dharavi have started using Whatsapp to communicate with clients and selling their products on ecommerce websites.

Travel Beats, a digital portal for Indian diaspora by IndianEagle, publishes the latest news and stories about India, USA, Canada and NRIs. IndianEagle is one of the best travel booking sites for flights to Mumbai and other Indian cities.