Venugopal and Madhavi Vippulancha who returned home (India) from the United States are among the few who are setting the brain drain to India in the reverse direction. They were corporate professionals in the San Francisco Bay Area. Venugopal held a lucrative job as a mechanical engineer in Silicon Valley, and Madhavi pursued her MSc. in Pharmacy and Genetics. The Indian couple’s life had been a roller-coaster ride thousands of miles away from Hyderabad until a mishap impeded the happy ride in 2003.

When Madhavi and Venugopal Vippulancha were mulling over a possible move back to India for cultural nourishment of their kids on the native soil, cancer started eating into their nest of joy. Madhavi was diagnosed with breast cancer.

Madhavi decided to eliminate the intake of chemicals from their everyday food and hit upon the idea of living on an organic diet. As organic farming was the only guaranteed way to ensure an absolutely chemical-free food in day-to-day life, the couple made up their mind about the plan to quit their high-paying jobs in the US and return to India. 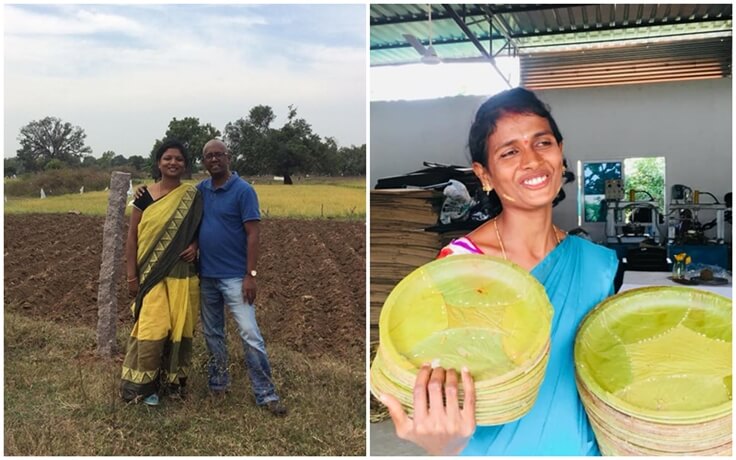 Luckily, Venugopal Vippulancha had made a prior investment in 25 acres of agricultural land on the outskirts of Hyderabad City. He took up organic farming not just as a source of chemical-free food but also as a means of sustenance. Madhavi helped her husband in carving a niche in the unknown territory while battling cancer.

Relying on their hard-earned savings, entrepreneurial acumen and never-say-die attitude, they have come a long way. Today, ten rural women are employed in their farm. However, the first few years of their settlement back home were not easy, especially against the odds of Madhavi’s breast cancer.

With their little knowledge of organic farming, the land remained barren and uncultivated for five to six years. Initially, they took up jobs in Hyderabad and learned organic farming with the passing of time. Having armed with the technical and practical knowledge of cultivation, they started farming by planting mango trees on weekends. Today, they own as many as 2000 trees of 30 different local varieties of mango in the farm.

Venugopal and Madhavi Vippulancha’s farm produces multiple crops, including organically grown fruits and vegetables. The farm yields chemical-free tomatoes, bitter gourd, ridge gourd, bottle gourd, okra, ginger, chillies, and other vegetables. In one portion of the farm, they grow marigold in order to keep pests away from the vegetables and fruits. On weekends, the couple spends quality time together doing organic farming.

Organic farming is not the end of their world. Before Indian government embarked on a mission towards mitigating the growing plastic menace all over the country on October 2 this year, the US-returned couple started manufacturing disposable sal plates and bowls in a bid to reduce plastic. This is also a way of empowering local women. The venture is named Vistaraku and aimed at replacing plastic disposable plates.

They have set up a small production unit on the farm itself and employed a few local women who are paid on a daily basis for stitching the sal plates. The women enjoy both – the ambiance and the work. The farmland is their second home where they spend a few happy hours of the day. Venugopal and Madhavi, too, spend time and share meals with them occasionally.

This is brought to you as part of the continued series of inspiring stories about India’s reverse brain drain by Travel Beats, a leading overseas Indian community portal and a subsidiary of Indian Eagle Travel. Indian Eagle is a most trusted air ticketing partner of Indians in USA, catering beyond booking their cheap flights to India. Subscribe to our free newsletter for latest community news, stories, events, visa updates and travel alerts.