It won’t be unjust or exaggerated to describe 2021 as the Year of Indian-origin women. From taking the lead in international politics to piloting Air India’s first and longest SFO-Bangalore flight over North Pole to steering the NASA Mars 2020 mission – Indian-origin women are defining 2021 as the year of their remarkable achievements. The moment NASA’s Perseverance Rover landed successfully on Mars and Dr. Swati Mohan announced, “Touchdown is confirmed,” the world went gaga over the Indian American aerospace engineer’s exceptional caliber, Indian roots, and bindi on the forehead.

Other than Dr. Swati Mohan who is in the spotlight of global media for being a poster girl of the NASA Mars 2020 mission, Dr. Vandana Verma – the Chief Engineer for Robotics Operations for NASA’s Perseverance Rover – deserves a special mention. A space roboticist at NASA’s Jet Propulsion Laboratory, Vandana ‘Vandi’ Verma is a leading member of the team having architected NASA’s passage to the Red Planet. From operating a tractor in a small Indian town to earning a pilot’s license to driving NASA’s Mars rovers, Dr. Verma has had an extraordinary journey. 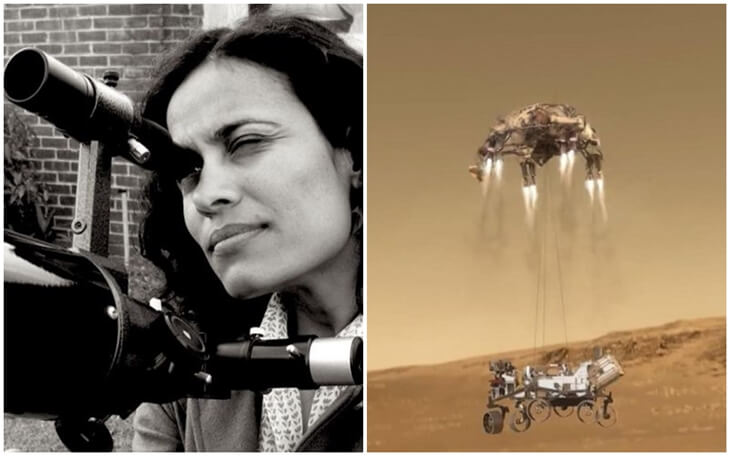 Daughter of a fighter pilot in the Indian Air Force, she was born in Punjab and raised as an army kid. After having earned a bachelor’s degree in electrical engineering from Punjab Engineering College in Chandigarh, Vandi Verma went on to study masters and pursue PhD in robotics at Carnegie Mellon University in Pennsylvania, USA. Her involvement in a 3-year astrobiology experimental station in the Atacama Desert, where the landscape is a bit similar to the surface of Mars, during her academic pursuit at CMU became the foundation of her career in robotics, which started with her testing of robotics technology in such precarious environments as the Arctic and the Antarctic.

On completion of her PhD in 2005, she joined Ames Research Center, a major NASA research facility in San Francisco, as a research scientist. There was no looking back for her after that. In 2006, she co-wrote and developed PLEXIL, an open source programming language that is used in automation technologies of NASA’s Mars rovers, including Curiosity and Perseverance. In 2007, she joined Jet Propulsion Laboratory, a federally funded NASA research and development center in California – which catapulted her career to a new high. In 2008, she was inducted into NASA’s Mars rover team.

Flying is next to her passion for robotics. Being an avid pilot, she operates private aircraft. She is also an advocate of STEM education for girls. She describes her work at NASA as “one of the coolest jobs in the world.” In order to drive robotic spacecraft to the Red Planet, “We tend to live by the Mars Clock and adjust our day to the Martian Day (a solar day on Mars) which is 24 hours 39 minutes 35 seconds,” Dr. Vandana ‘Vandi’ Verma says.

Since 2008, India-born Dr. Verma has been part of NASA’s Mars Exploration Rover projects. She operated three rovers – MER-A Spirit, MER-B Opportunity, and Mars Science Laboratory’s Curiosity – prior to Perseverance for NASA’s Mars 2020 mission. Apart from having a treasure trove of as many as eight NASA awards, she has a documentary film made by a Finnish director on her work on NASA’s Mars rover Curiosity. In 2020, she appeared in the episode 6 of the US Air Force documentary titled Science in the Extremes (series 3) and gave a walk through her work on NASA’s Mars rovers.