“The Concorde was fabulous. I had a love affair with the Concorde that lasted longer than both of my ex-wives. It was a great part of my life. The difference between it and a conventional aircraft is like a Rolls-Royce or Cadillac and a Lamborghini or a McLaren. It was so futuristic and so gorgeous,” said Fred Finn, the “World’s Most Traveled Person” title holder in the Guinness Book of World Records, who took a whopping 718 flights on the ultra-fast supersonic jet.

October 24, 2003 saw the Concorde fly high for the last time after three years of struggle following a fatal crash causing the death of all 109 passengers aboard in 2000. Once a darling of the jet-setting elite for its promise “Arrive before you leave” and matchless luxury, the space-age wonder became a silent exhibit in aviation museums after Air France and British Airways stripped their fleet of the supersonic jet.

The Concorde – a celebration of wealth, power and technology in its heyday – traveled faster than sound from New York to London in only 3 hours and 45 minutes, half the time a Boeing 747 takes to cover the same distance. Other than high economics of production and operations, the September 11 attack on the World Trade Center accelerated the grounding of the Concorde. Forty of the Concorde’s frequent flyers who made business travel more than 20 times a year worked at the World Trade Center. Their demise in the 9/11 attack hurled a blow to the world’s fastest passenger flight. 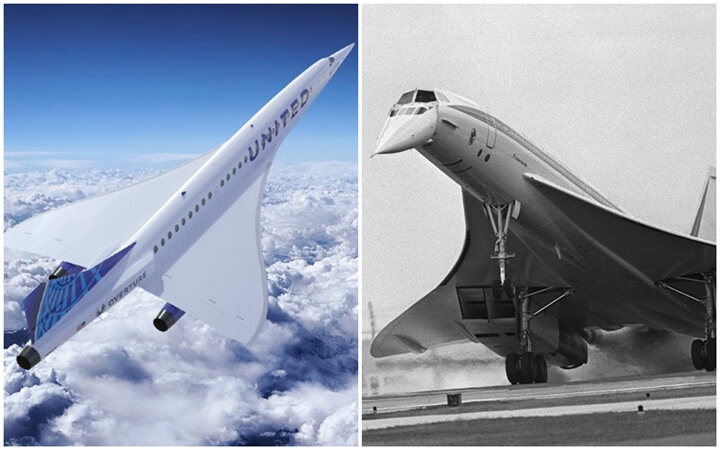 Nearly two decades after its sunset, United Airlines is gearing up to welcome back the era of supersonic air travel but with brand new trappings. Early this month, United Airlines inked a deal with Boom Supersonic, a Denver-based aerospace startup and ordered 15 jets of the model “Overture” that can fly twice the speed of a modern commercial aircraft in any airline’s fleet. The supersonic jets will be unveiled by 2025 and inducted into United Airlines’ fleet by 2029 for civil flights.

Reportedly, United Airlines’ supersonic travel plans are a part of the infrastructural boost that President Biden talked about at length while announcing his ‘American Jobs Plan’ to rebuild the US economy, on April 7. He said, “We’re going to talk about commercial aircraft flying at subsonic speeds — supersonic speeds.  Be able to, figuratively, if you may — if we decided to do it, traverse the world in about an hour, travel 21,000 miles an hour.  So much is changing.  We have got to lead it.”

Boom Supersonic’s Overture is expected to be 75% more efficient than the Concorde in terms of operational dynamism, sustainability and fuel consumption. Unlike the Concorde which consumed 22 tons of fuel per hour – double the amount of fuel a B747 requires for carrying four times more passengers – the Overture will run entirely on sustainable aviation fuel (SAF). It will be the world’s first large passenger aircraft to have zero carbon footprints from day one. Biofuel for sustainable aviation is made from agricultural waste, nonedible natural oil and other organic stuff.

Speed, safety and sustainability are the principles of the Overture. The Concorde’s deafening sonic boom was a harsh toll on the environment. United Airlines’ upcoming supersonic planes will be lesser noisy than the Concorde, because they will be equipped with Rolls-Royce engines that will make a sonic boom while flying over water bodies, not over land. Overture planes will be equipped with passenger-friendly smart features, like world-class in-seat entertainment screens and contactless technology. There will be ample personal space.

Though financial details of the United-Boom deal have not been disclosed, an Overture plane will cost the same as a new Boeing 787 which major international airlines deploy on long-haul routes. Boom Supersonic will have to meet United Airlines’ operating requirements, safety norms, sustainability parameters and other preferences, in addition to securing regulatory approvals from Federal Aviation Administration (FAA) and US Department of Transportation, before making the delivery. United Airlines may expand its fleet of supersonic planes from 15 to 35.

Only time will tell whether United Airlines’ Overture planes will provide the luxurious hospitality offered on the Concorde. “Six cabin crew members were in charge of executing multi-course meal service to 100-odd passengers per flight,” said Joe Cuddy, who worked as a flight attendant on the Concorde for nine years. The Concorde was such an engineering feat that it could fly at altitudes up to 60,000 feet and cruise at a speed of 1354 miles per hour. The Concorde’s every hour in the air demanded 22 hours of maintenance for the aircraft, whereas it is only 8 hours for a 747.