India is fast emerging into a favorite destination with the Rich and Famous. Jodhpur is the cynosure of all eyes, with Supermodel Naomi Campbell hosting the 50th birthday of her Russian boyfriend Vladimir Doronin. The magnificent Mehrangarh Fort was decked up for the pre birthday bash on November 6.Nearly 200 celebrities from Hollywood and the modeling industry were flown in by thirteen chartered planes. Chauffeured in Vintage cars, the guests are put up at the Umaid Bhawan Palace hotel. 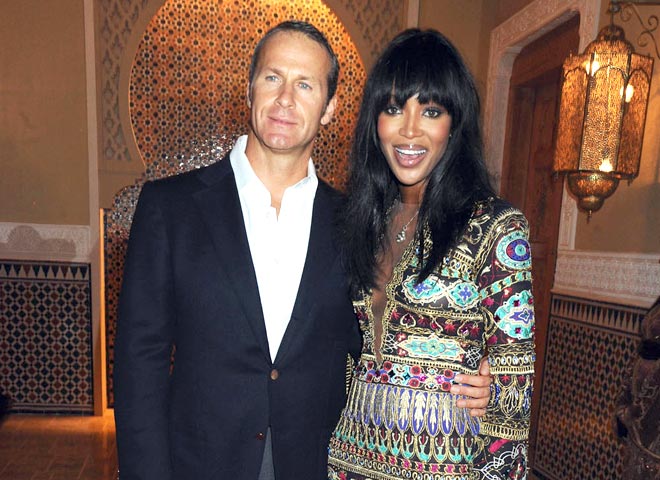 The 42-year-old catwalk queen has left no stone unturned for the success of the birthday party. Dressed in a pink and purple lehenga-choli ,Campbell  has ensured the festive atmosphere is created in typical Rajasthan décor and colors. Colourful sofas, cushions, Rajasthani paintings, handicraft items, royal oil lamps and carpets. The Forts Dramatic walls will be lit in pink and yellow lights and adorned by a mock poster of Doronin depicted as James Bond and Campbell as Bond Girl.

Guest were traditionally welcomed with Rajasthani multicoloured pagris with dhol and nagaras lining the entrance.Musical performance are lined with Diana Ross, Black Eyed Peas, Grace Jones and Jennifer Lopez.The who’s who of the Fashion industry Donatella Versace, Kate Moss, Giorgio Armani will add up to the glam quotient.

Jodhpur,the second largest city of Rajasthan is known as a  popular tourist destination. Palaces, forts and temples,set in the stark landscape of the Thar desert, the city is known as the “Sun City” for its bright and sunny weather.”Blue City” is its other name as blue-painted houses are found around the Mehrangarh Fort.

Besides the ethnic ambience, the A-list celebrities will be introduced to Rajastahni cuisine prepared by seasoned chefs. kair-sangri, bajra-roti, dal fry, kadhi, mix vegetable, lal maas, tava roti are planned with 18 different on the menu.

The birthday bash which has coverage by media globally is a shot in the arm to boost tourism for Rajasthan.

One thought on “Supermodel Naomi Campbell in Jodhpur”