“Starbucks should now introduce Madras Kaapi in its menu with the new CEO on board,” wrote a Twitter user. “Starbucks, it’s high time you bring Irani chai and Osmania biscuits to your menu,” a tweet read. “Hope we can now get cutting chai in Starbucks soon,” another Twitter user posted. A spate of such hilarious tweets broke out as Indians worldwide took to Twitter celebrating the appointment of India-born Laxman Narasimhan as CEO of Starbucks. 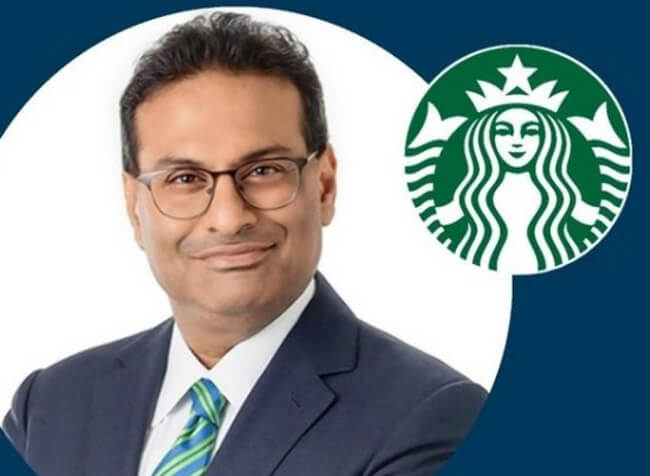 Laxman Narasimhan from Pune, Maharashtra joined the unstoppable force of Indian-origin business leadership as the new CEO of Starbucks, the world’s largest coffee chain with close to 35,000 stores and nearly 4 lakh employees worldwide. He will relocate to Seattle, WA from London and join the coffee giant as its incoming CEO on October 1. He will be onboarded on April 1, 2023 to play a pivotal role in accelerating the company’s growth that is currently saddled with various challenges including rising inflation and a unionization movement.

Netizens have started googling the net worth and salary of Starbucks’ Indian-origin CEO Laxman Narasimhan. According to a regulatory filing, he will draw US$1.3 million per annum as his base salary and $1.5 million in cash as a one-time signing bonus. Once he takes office at the headquarters in Seattle, he will become eligible for Starbucks’ equity shares worth $13-$15 million. Reportedly, Starbucks will indemnify him with a one-time replacement equity grant of $9 million for the incentives that he will loose for stepping down as CEO of Reckitt Benckiser.

Laxman Narasimhan, a 55-year-old FMCG industry veteran, has already left a parting note on LinkedIn for Reckitt Benckiser where he was CEO for 3 years and transformed “the company’s branding in its relentless pursuit of a cleaner, healthier world by making one’s access to hygiene, health and nutrition a right, not a privilege”. His leadership career will undergo a paradigm shift at Starbucks in view of the revenue losses in China and Russia. However, his three decades of experience in developing and leading purpose-led, B2C brands is his trump card.

Having been appointed as Starbucks’ CEO seems to be the culmination of his ‘American Dream’ story that had begun with an MBA degree in finance from Wharton Business School, the University of Pennsylvania. On completion of his MBA studies in 1993, he had joined McKinsey & Company that he resigned from as Director in 2012. He had traveled to the US with an F1 visa on his passport, an economy flight ticket, and a degree in Mechanical Engineering from the University of Pune. His rise through various leadership roles in the C-suite of PepsiCo, from 2014 to 2019, is full of milestones including business class travel to India and other destinations,” said the Editor of Travel Beats, a subsidiary of Indian Eagle.

“Laxman is an inspiring leader. His understanding of our culture and values, coupled with his expertise as a brand builder, innovation champion, and operational leader will be a true differentiator as we position Starbucks for the next 50 years. His phenomenal experience in driving strategic growth in both emerging and existing markets makes him the ideal choice as CEO of Starbucks. I am thrilled to welcome him,” said the global American coffeehouse chain’s interim CEO Howard Schultz.