Jaipur Literature Festival is Asia’s biggest platform in India for the meeting of creative minds from across the globe. When Jaipur City shivers by dint of numbing cold in the third week of January, the festival’s venue Diggi Palace feels warm as temperature rises with the heat of debates and discussions among the guest speakers, who travel to India and grace the fest with their luminous presence. Though it is a literature festival as the name suggests, it is not restricted to only one genre of creativity. It is as inviting to leading editors, journalists, publishers, filmmakers, actors and activists as to writers and authors. Since its inception in 2006, Jaipur Literature Festival has been riding higher waves of popularity by fetching in a galaxy of glittering stars from different walks of life. Indian Eagle lists some of the guest speakers for the 8th edition of Jaipur Literature Festival, with a brief introduction below:

Aakar Patel – a published non-fiction writer and columnist for a few leading publications. ‘Low Trust Society’ is his upcoming book on India.

Ahmed Rashid – A multi-award winning writer and author of the bestselling ‘Taliban’. His ‘Taliban’, and ‘Descent into Chaos: The US and the Disaster in Afghanistan, Pakistan and Central Asia’ are studied at 200 universities across the world.

Adam Johnson – An associate professor in creative writing at Standford University and winner of the Pulitzer Prize 2013 for “The Orphan Master’s Son’.

Adam LeBor – A journalist and author with 11 books to his credit. His conspiracy thriller, ‘The Washington Stratagem’, set in the United States was published in November this year.

Alexis Wright – an eminent novelist with ‘Plains of Promise’, ‘The Swan Book’, ‘Take Power’, and ‘Carpentaria’ to her credit.

Alberto Manguel – a widely published Canadian writer, critic, translator and editor. He is a winner of several international awards for his novels including ‘All Men are Liars’, ‘The Library at Night’, and ‘The Dictionary of Imagery Places’.

Amish Tripathi – India’s first literary popstar whose Shiva trilogy – ‘The Immortals of Meluha’, ‘The Secret of the Nagas,’ and ‘The Oath of the Vayuputras’ is the bestselling book series.

Amit Chaudhuri – an award-winning, eminent author and critic whose latest novel ‘Odysseus Abroad’ is the talk of the literary town worldwide.

Arshia Sattar – an award-winning writer whose translations of ‘Valmiki Ramayana’ and ‘Tales from Kathasaritsagara’ are widely read. Her latest book is ‘The Mouse Merchant: Tales of Money in Ancient India’.

Anupama Chopra – a film critic, author and Bollywood writer whose book ‘Sholay: The Making of a Classic’ won the National Award in 2001.

Ashwin Sanghi – one of the most eminent Indian English author with the bestselling series of ‘The Rozabal Line’, ‘Chanakya’s Chant, and ‘The Krishna Key’ to his credit.

Caryl Ferey – a global traveler who toured the world at the age of 20. His novel Mapuche tells the battle of the Grandmothers of the Plaza de Mayo in Argentina.

Elizabeth Gilbert – an acclaimed fiction and non-fiction writer whose latest novel, ‘The Signature of All Things,’ is named the Best Book of the Year 2013 by the New York Times, and the Chicago Tribune.

James Astill – the Political Editor for The Economist whose book ‘The Great Tamasha: Cricket, Corruption and the Turbulent Ride of Modern India’ records the social history of Indian cricket.

Indrajit Hazra – a novelist and journalist with three novels including ‘The Burnt Forehead of Max Saul’, ‘The Garden of Earthly Delights’, and ‘The Bioscope Man’ to his credit. His first famous book in the non-fiction category is ‘Grand Delusions: A Short Biography of Kolkata. 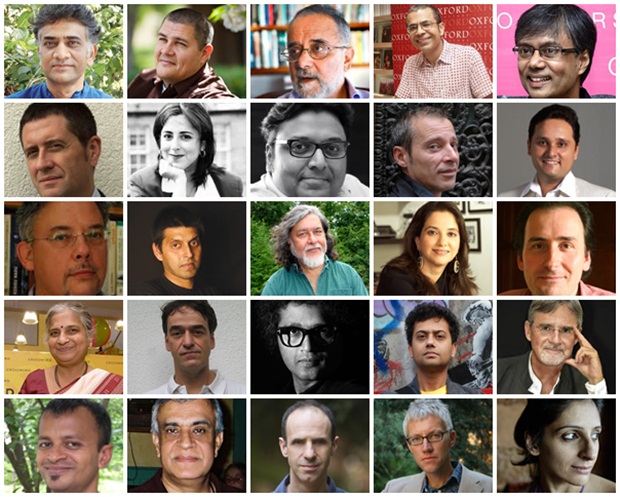 Kai Bird – a Pulitzer-winning historian and journalist whose latest book is the bestselling biography of a CIA officer, ‘The Good Spy: The Life and Death of Robert Ames’.

Kalyan Ray: an eminent professor of English Literature in India and the USA with several books of translation and novels including ‘No Country’, ‘City of Memories’, and ‘Emperor Babur’s Prayer’ to his credit.

Llewelyn Morgan – a Classicist at Oxford University and author of ‘The Buddhas of Bamiyan’. He is fond of Roman poetry.

Madhu Trehan: the founding editor of the news magazine India Today, and author of the bestselling ‘Prism Me a Lie, Tell Me a Truth – Tehelka as Metaphor’. She is a pioneer in investigative journalist.

Neel Mukherjee – one of the contemporary Indian English writers with two novels – ‘Past Continuous’, and ‘The Lives of Others’ to his credit. The first novel won the Writers’ Guild of Great Britain Award.

Rajiv Malhotra – an Indian American researcher in Princeton, the USA. He is the founder of Infinity Foundation, and author of ‘Being Different’, ‘Breaking India’, and ‘Indra’s Net’.

Raj Kamal Jha: chief editor of The Indian Express and author of ‘The Blue Bedspread’ which won the Common Wealth Writers’ Prize for Best First Book in 2000. ‘She Will Build Him A City’ is his upcoming novel.

Sudha Murthy – the chairperson of Infosys Foundation and a prolific Indian English writer. She has won several awards including the R.K. Narayan Award, the Padma Shri and the Attimabbe Award for excellence in Kannada Literature.

Sandip Roy – a Kolkata-based fiction writer who has authored ‘Don’t Let Him Know’. He is a senior editor with Firstpost.com, a leading news portal in India.

Tom Holland – a published author and documentary writer with four books on ancient and early medieval history – ‘Rubicon, Persian Fire, Millennium, and ‘In the Shadow of the Sword’ to his credit.

Tim Supple – a theatre director and writer at the National Theatre and the Royal Shakespeare Company. He has directed the internationally acclaimed ‘A Midsummer Night’s Dream’, and others.

Sam Miller – the author of ‘Delhi: Adventures in a Megacity’, ‘Blue Guide: India’, ‘A Strange Kind of Paradise: India through Foreign Eyes.

Travel to India and witness the love for literature this year. IndianEagle.com is booking cheap flights to India from USA at the best prices. Don’t miss the opportunity to attend the world’s largest free literary fest!