In 2021 alone, a record 78,284 Indians gave up their Indian citizenship and became US citizens. The 2018 American Community Survey conducted by the US Census Bureau revealed that Indian Americans make the second-largest immigrant group in the United States. This would not have been possible if JJ Singh had not laid the foundation for naturalization of Indians in America in 1946. 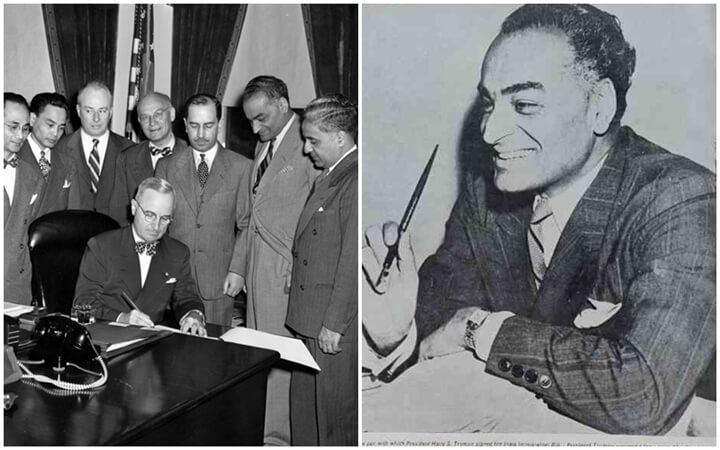 The battle JJ Singh, an astute businessman from Punjab in the undivided India, had fought for some 4000 Indians in America then, established the passage to US citizenship for lakhs of Indians till this date. The US Supreme Court’s verdict in the 1923 States vs Bhagat Singh Thind case denied naturalization to Indians. His advocacy for Indians’ right to naturalized citizenship in the US overturned the ruling after years of lobbying in the corridors of power and led to President Harry Truman signing the Luce-Celler Act into law. 2022 marked the 76th anniversary of the law that allowed Indian immigrants to naturalize as US citizens starting from 1946.

Born in 1897 in Rawalpindi, Jag Jit Singh travelled to different parts of Punjab province with his father, a judicial officer. The waves of protest that erupted in the aftermath of the Jallianwala Bagh massacre swept Singh in his early 20s into the Non-Cooperation Movement by Gandhiji. Out of his disillusionment over Gandhiji’s decision to call off the movement in 1922, he moved to the UK to study law. He attended an exhibition at Wembley in London where different handicraft products of British India were showcased to the English and Irish audiences. He took a cue from the success of the exhibition and imported silk fabrics, embroidered clothes as well as handloom products from India to sell in Britain with a cousin’s help.

In 1926, he exhibited his merchandise of Indian fabrics at an exhibition in Philadelphia, the US. An overwhelming response to his merchandise made his fortunes turn around over the opening of two stores – one on Philadelphia’s Walnut Street and the other on New York City’s Fifth Avenue, a most happening thoroughfare for shoppers in Manhattan. Today many celebratory parades, including the Indian Day Parade, in New York City run through this avenue. With New York’s party animals, social butterflies and fashionable crowd taking fancy to the imported silk and cotton fabrics of India, his textile business boomed across the northeast US and he trailed into the influential circles of Indians in America.

In the mid-1930s, JJ Singh established the Indian Chamber of Commerce to develop and nurture bilateral trade relations between the US and British India. But he saw how the British Raj was exploiting the manufacturing of fabrics in India for the economic growth of Britain and how the colonial restrictions inhibited India’s trade potential in other overseas markets. Eventually, he joined the India League of America to create a force and channelize it towards unleashing India’s economic potential.

He took office as president of the India League of America in December 1941 when the political upheaval having erupted from Japan’s attack on Pearl Harbor forced the US to ally with Great Britain and enter World War 2. As President of the India League, he took a couple of strategic steps to counter the British propaganda that tried to create a biased impression on Americans that independence of India would be the bane of the US-Britain’s allied efforts in WW2.

He changed the discourse from the Indian literature and philosophy to the Indian freedom struggle and Indians’ right to US citizenship at the India League of America. He made an inclusionary move to welcome to the league influential Americans from different walks of life, such as Walter White, a leading African American activist; Pearl S. Buck, a noted American novelist and Pulitzer Prize winner; Roger Nash Baldwin, one of the American Civil Liberties Union founders; John Haynes Holmes, a proponent of peace and racial equality; Louis Fischer, a biographer of Mahatma Gandhi.

The opening of an office of the India League in Washington DC was a pivotal move by JJ Singh to catch up with the US Congress members and draw their attention to the colonial oppression in India. He deliberately highlighted such critical issues as the Bengal Famine during his conversations with policymakers at Capitol Hill. “Indians believe in the teachings of Lincoln and Washington. They can die for democracy if given a chance,” he said during a radio program in 1942, urging Americans to support India’s fight for freedom and championing the interests of 4000 Indians in the US. His cause resonated with influential Americans who were demanding a more democratic world post WW2.

His outreach to the US corridors of power bore fruits when Emanuel Celler and Clare Boothe Luce from the US Congress drafted a bill named Luce-Celler Act to undo the US Supreme Court’s 1923 ruling that denied citizenship to Indian immigrants. Supported by scientist Albert Einstein and civil rights activists, the Luce-Celler Act also challenged the racial eligibility criteria of the Naturalization Act of 1790, according to which only free white persons, aliens of African nativity and persons of African descent could seek naturalization in the US. The other members of US Congress gave their consent to the bill as they found the racial eligibility norms in disharmony with the contemporary American belief in racial equality and fairness – which was rife in the post-war political milieu.

Furthermore, America envisioned a future ally in India after the British Raj was shaken to the core by Gandhiji’s Quit India movement and Netaji’s Azad Hind Fauj. Driven by political expediency, President Truman signed the Luce-Celler Act of 1946 into law on July 2 and handed over his pen to Sardar JJ Singh. The landmark law enabled the 4000-odd resident Indians in the US to seek naturalized citizenship. However, there was still a roadblock as the law allowed only 100 Indians and 100 Filipinos to enter the US every year.

Instead of taking up US citizenship, JJ Singh returned with his family to New Delhi in 1959. He became a staunch supporter of Jayaprakash Narayan, a veteran Gandhian, freedom activist, socialist and a Ramon Magsaysay Award winner. He also advocated for a “peaceful resolution of the Kashmir issue”. He took his last breath during the Emergency in India. His legacy continues to survive through his granddaughter, Sabrina Singh who holds a key position in the US Department of Defense. Prior to that, she was a White House Deputy Press Secretary in the Biden administration.