The United States’ announcement of having selected 13-year-old Indian American Rishab Jain as the nation’s Top Young Scientist of 2018 seems to have doubled up the Dussehra celebration for Indians in America. Having won Discovery Education’s 3M Young Scientist Challenge 2018, Rishab Jain joined the league of extraordinary young Indians at Travel Beats, an Indian American community portal by Indian Eagle Travel.

Held in St. Paul, Minneapolis the day before yesterday (October 17, 2018), the 3M Young Scientist Challenge 2018 selected 7th grader Rishab Jain out of the ten finalists, for his artificial intelligence-based algorithm for effective pancreatic cancer treatment, declared him America’s Top Young Scientist and awarded him a scholarship worth USD 25,000. 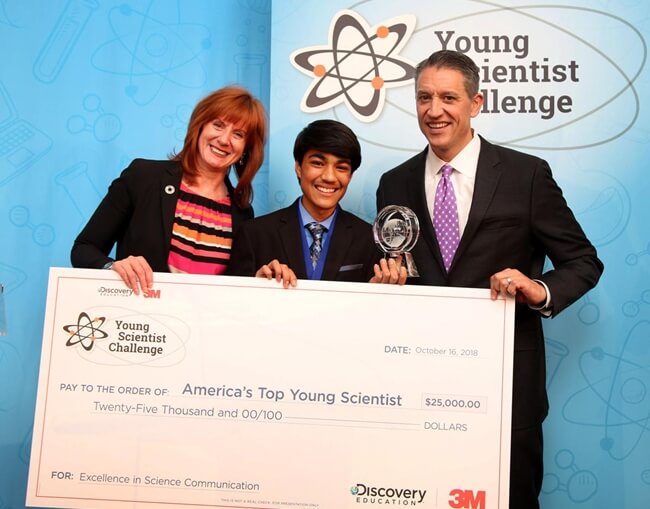 The 3M Young Scientist Challenge 2018 winner, Rishab Jain from Portland has created the Pancreatic Cancer Deep Learning System (PCDLS) to help locate the pancreas accurately during MRI radiotherapy, using artificial intelligence in real time. Right from the beginning of the competition, he has been confident about his invention’s potentiality of being instrumental in making pancreas cancer treatment effective manifold.

Difficulty in targeting the affected cells of the pancreas due to the gland’s obscured location behind stomach and amidst other nearby organs lessens the efficacy of radiotherapy for pancreatic cancer. Apart this, the pancreas may be moved a little by the dint of certain anatomical changes in the abdomen, which makes it difficult to locate and target tumorous growths in the gland during radiation treatment. As a result, healthy cells of the pancreas are mistakenly targeted for radiotherapy, at times.

The fourth runner-up in the race for America’s Top Young Scientist 2018 is 12-year-old Sriram Bhimaraju from Cupertino, California. An aspiring Nobel laureate, Indian American Sriram Bhimaraju has developed an innovative app named Archery Assistant to help improve an archer’s aim at the target in real time.

You can read about the other two Indian American finalists among the top 10 and their innovative entries to America’s Young Scientist Challenge 2018 and sign up for our free newsletter subscription for the upcoming Indian American community stories and visa & immigration news.