Needless to say climate emergency is a dire threat to the planet and life on it. In view of climate emergency affecting the planet like a slow poison, Indian-origin Reshma Kosaraju’s AI device that can predict when and where forest fires may happen is the next big thing in the pursuit of saving the existence of life on earth. Forest fire, a deadly manifestation of climate emergency, seems a clarion call for nature’s war against the human civilization.

Reshma Kosaraju, a 15-year-old Indian American, won the Children’s Climate Prize, on November 8, for her futuristic project, AI against Forest Fires. Institutionalized in 2016, the Children’s Climate Prize is awarded to a student in the age group of 12 to 17 for his/her extraordinary innovation that can help save life on the planet. Selected among hundreds of young minds from 32 countries, Reshma received a medal, a diploma certificate and a SEK 100,000 ($11,355). 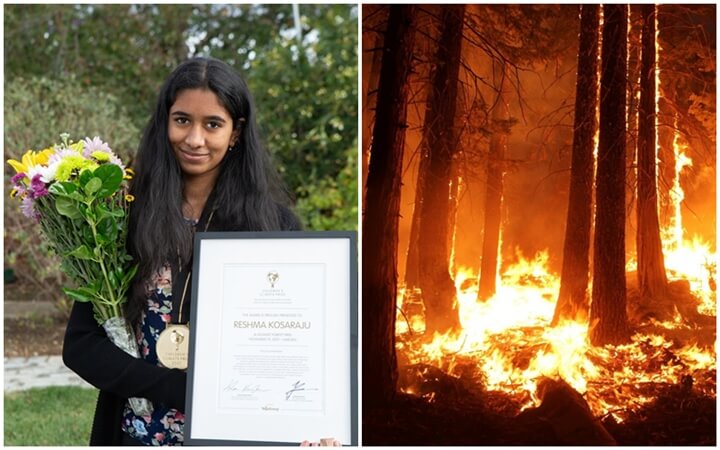 Reshma Kosaraju is from California where 9917 fires (a record-setting number) burned 4.4 million acres of forest – equivalent to more 4% of the state’s 100 million acres of land – in 2020. On August 18, California’s Governor Gavin Newsom declared a state of emergency over the 2020 California wildfire season triggered by by the effects of climate change. The findings of the latest research published by the New York Times predict that California will see an increase in wildfires by 20% or more by the 2040s.

The California Camp Fire 2018, which claimed hundred lives and caused damages worth $17B, impelled Reshma to develop an AI-based predictive model when she was only 12. The model can predict possible incidence of forest fire with 90% accuracy, using the fire index data and meteorological data. She is working to develop the model further into an app so that firefighters and people living nearby forest areas can take necessary safety measures before a forest fire breaks out in any part of the world.

A resident of Saratoga in Santa Clara County, Reshma Kosaraju was one of the 10 finalists for America’s Top Young Scientist Title 2019 for the same innovation that the Children’s Climate Foundation describes as a scalable business concept with global application. The AI against Forest Fires can be a boon to the US economy that incurs an annual loss of up to $350bn due to environmental and wildlife damages caused by destructive forest fires. It can also help save the US taxpayers’ $3 billion that goes into combating wildfires.

The Children’s Climate Prize 2021 winner, Reshma Kosaraju said, “I’m happy. My hope is that this win will lead to more people hearing about AI against Forest Fires, and that it will become a universally accessible tool for predicting forest fires.” “I’m incredibly impressed by Reshma’s inventiveness. She is the obvious winner of the Children’s Climate Prize 2021, a year when forest fires have once again affected a large part of the world. The world needs Reshma’s innovation and we need to support the courageous youth who are working for a better tomorrow,” said Johannes Boson, chairman of the Children’s Climate Foundation.

Another young Indian American from California, 17-year-old Yash Narayan was one of the five finalists for the Children’s Climate Prize 2021. He started his crusade for the environment by developing an easy-to-use mobile app called DeepWaste that leverages AI technology to help people with waste classification. Using the app, people can find what can be composed and what can be recycled out of the waste.