Home / News / ‘Your Seat is not a Sleeper Berth.’ Flyers Should Ask before They Recline Seats while Traveling in Economy

“Your seat is not a sleeper berth” on economy flights, is the message that has been making rounds in the aviation world since a recent incident involving two passengers at loggerheads over the reclining of one’s seat back towards the other aboard went viral. The video of a woman passenger whose reclined seat was repeatedly pushed and punched by a man sitting behind her, on an American Airlines flight from New Orleans to Charlotte, has stirred a debate on ‘air travel etiquette’ in current times when economy cabin is losing out space to premium economy seats with ample legroom. 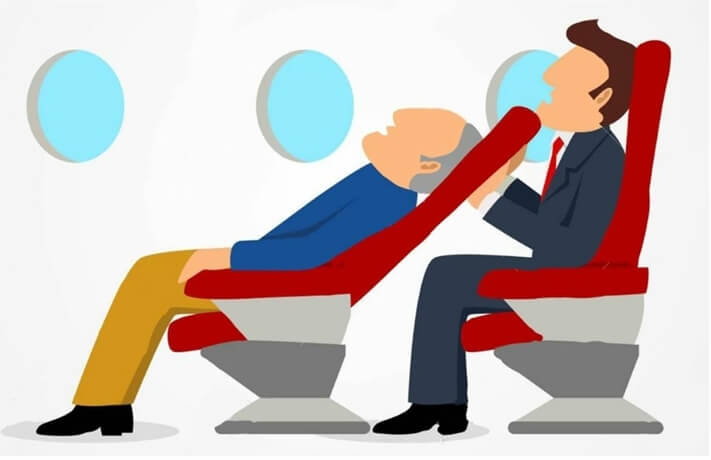 In response to the ongoing debate as to whether we should recline our seats while traveling on economy flights, Delta Air Lines’ CEO Ed Bastian said, “I think the proper thing to do is, if you recline into somebody, that you ask if it’s OK first and then you do it.” To be precise, the CEO of Delta Airlines intended to say that passengers can recline their seats, but they should seek permission of the co-passengers sitting behind them before leaning the seats back.

In his interview on CNBC’s Squawk Box, Ed Bastian said, “We have been testing a reduction in the degree to which economy seats can be reclined on Delta Airlines flights.” He added that he avoids reclining while traveling in economy, and that he never says anything if the passenger sitting before him reclines. Delta’s fleet of Airbus 320 has already been optimized with reduced-recline seating that offers only two inches of recline, whereas 4-in recline is standard in the economy travel class.

“Undeniably, air travel etiquette is a need of the hour for economy class passengers to travel in harmony. But, the root of such incidents as the reclined seat-punching one on American Airlines is the shrinking of space and legroom in regular economy travel cabins. Not only legroom, but seat width and seat pitch have also been reduced to some extent of budget flyers’ discomfort on cheap economy flights,” said the chief travel economist of Indian Eagle, a leading international travel agency.

Indeed! Some airlines are packing in more seats to increase revenue from economy flight tickets, thereby reducing the seat pitch that is distance between two rows. Some airlines are reducing regular economy space to make way for premium economy seats which fetch almost twice the price of a standard economy seat. Early in 2019, an additional 1600 premium economy seats were fitted on as many as 250 aircraft in the fleet of United Airlines. Among the rival carriers, American Airlines and Delta Air Lines followed suit. Other airlines having joined the bandwagon make economy travel by air a genuine test of physical endurance for senior citizens.

Days after the incident of punching a reclined seat on American Airlines, India’s Ministry of Civil Aviation asked travelers to maintain the etiquette of flying and be considerate of other people’s space on board.  “Don’t be a binhog. Be a responsible traveller and travel smart,” was another message of the Civil Aviation Ministry urging people to be considerate of space in the overhead bins of cabins.

A little bit of basic good manners and respect are always worth a thumbs up.
Your seat is not a sleeper berth. Don’t be inconsiderate of other people’s space.#BeAResponsibleTraveller #EtiquettesOfFlying pic.twitter.com/K8N30wLZRd

One thought on “‘Your Seat is not a Sleeper Berth.’ Flyers Should Ask before They Recline Seats while Traveling in Economy”