Be it a common man or a dignitary, everyone has a story to tell. Some stories of common people travel across geographies, while some remain in obscurity. The latter is true about Alamelu Amma, the oldest Indian American in Atlanta. Her life was an eventful journey from Myanmar to India to USA. She was a witness to the transition of civilization from the colonial era to the modern age.

Yes she was. Not she is. 103-year-old Alamelu Amma breathed her last yesterday (Wednesday, December 28) at Norman, Oklahoma. The oldest in Atlanta Indian community, she is survived by her children and grandchildren. She was born in Yangon (now Rangoon) in 1913, worked in Tamil Nadu and spent her post-retirement life in Atlanta, USA.

Alamelu Amma traced her roots to Kanchipuram or Kanchi, a historical temple town in the Indian state of Tamil Nadu. She was born and brought up in Burma (then Myanmar). Her father was a chartered accountant. In the 1930s, she was one of the few ambitious Indian women who completed graduation. On completion of her education in Rangoon, she came to Tamil Nadu and joined Kanchipuram Government High School though she was married off to a would-be doctor when she was a teen. 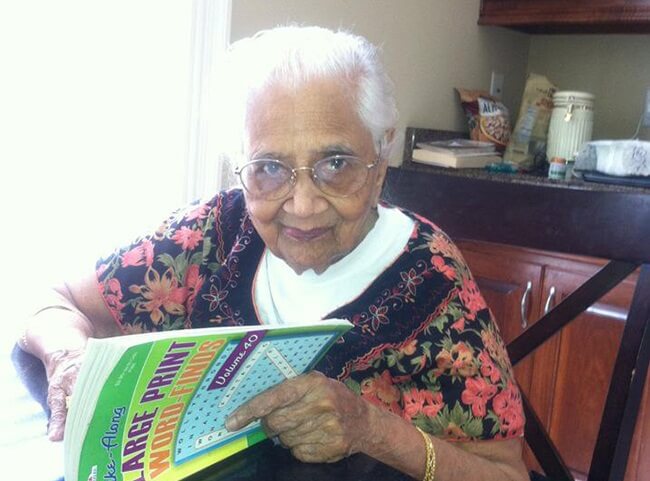 In her teens, she was more interested in litigation than any other discipline. Her father wanted her to study law. But her elder siblings dissuaded her from taking up law as a career as she was very outspoken. She earned BA and MA degrees in English Literature. Then she pursued B.Ed. in teaching. Thus she became an educator and remained an educationalist for 60 years. She started her marital life only on completion of post-graduation. She gave birth to her first child when she was 22.

Alamelu Amma’s happy life slipped into doldrums when she had to leave her husband behind in Rangoon (then Yangon) during the Second World War. According to the law of Yangon, he had to stay back and treat the wounded. Amma had no clue of his whereabouts in the conflict-ridden Yangon for three months. Later, he had to walk all the way through the forests of Assam for having missed the last ship to Calcutta.

The life of common man returned to normalcy after the worms of the war settled in the dust. Alamelu Amma started a new life with her family in Kanchipuram, but culture shock was awaiting them in the then Indian society. With the passing of time, the things fell in place. She became honorary magistrate of Kanchipuram district in the 1950s, and her husband’s medical practice gained momentum gradually.

Alamelu Amma, the oldest Atlanta Indian American, turned 102 in 2015. She was healthy and active even at the age of 102.  She used to do math and solve crossword puzzles in order to keep her cerebrally and mentally active. She could speak four languages with equal finesse: Tamil, Telugu, Sanskrit and English. She made it a habit to write something in those languages in order to keep her linguistic proficiency alive. She led an active life till her last breath.

May her soul rest in peace!