Home / News / New York is back to Normal Life after 90 Days of Rigorous Lockdown. Reopening of NY Dosas Proves it

With a gradual ease of the restrictions, New York – the Empire State is breathing again. Life in New Jersey is returning to its normal tempo, too. From 11,571 COVID19 cases, the highest in April, to only 391 cases on June 24, New York has gone through a deafening silence. One of the busiest and most happening areas across New York City before the Coronavirus outbreak in the US, Washington Square Park in Lower Manhattan has been waiting for its heart to beat again. New York has reported only five deaths related to COVID19 on June 29 – which seems to accelerate the state’s final exit from lockdown.

The Dosa Man of New York City is making a comeback tomorrow, with fresh vigor and exuberance, after 90 days of lockdown. NY Dosas, the most popular street food joint with a massive fan base, is all set to reopen and cater south Indian delicacies to thousands of taste buds from tomorrow. New York Indians had been waiting for the return of their favorite Dosa Man as restlessly as they have been anticipating resumption of New York to India flights in July. 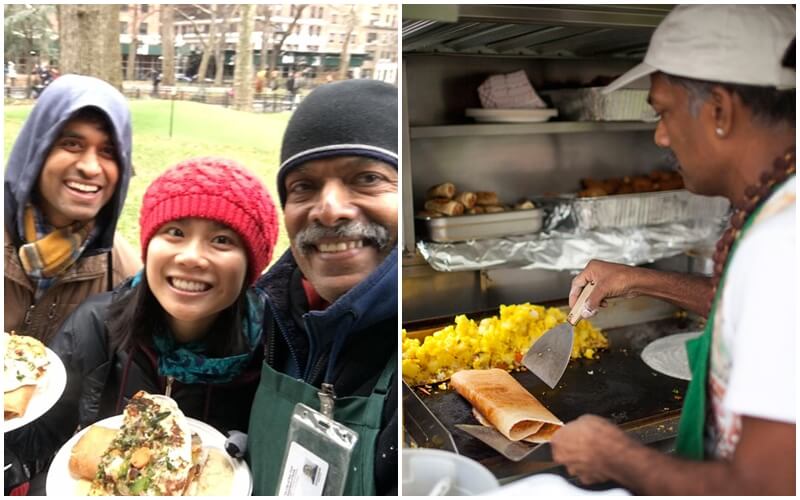 NY Dosas, a landmark for foodies in Washington Square Park, is run by Palaniswami Thiru Kumar, is a Sri Lankan Tamil born in Jaffna. Since 2001, the unique aroma of masala dosa being prepared on a hot pan has been flaring up the nostrils of people and enticing them to follow the path of the whiff only to end up at NY Dosas. The Dosa Man of New York City also dishes out idli, Jaffna lunch, Pondicherry dosa, vegetable uthappam, samosa, Singapore noodles, grilled stuffed roti, and vegan drumsticks.

Pondicherry dosa is his version of the most popular South Indian masala dosa. Stuffed with mashed potato and chopped vegetables, a piece of Pondicherry dosa is served with spicy coconut chutney and hot-piping sambar at NY Dosas in Washington Square Park. His vegan masala dosa is not just a healthy alternative to his urban American customers but a bestseller.

Every day, as soon as the food cart starts at 11 am, people from all walks of life, especially students of New York University, make a beeline for platefuls of scrumptious snacks served there. While a meal in New York City costs nothing less than $40, Thiru has priced all his items under $10. Even masala dosa, the undisputed star of his menu, is priced at $9 only. He says the reasonable pricing is an informed decision he took so that everyone could stop by NY Dosas and relish the dishes.

Like most of the restaurants in New York, the Dosa Man Thiru Kumar could have easily maximized his profits by serving Thattu Dosa-Omelet. But he refrains from doing this since he promotes veganism. He prepares masala dosa according to his customers’ varying tolerance for spicy food. He makes sure to check their preference – Indian medium spicy or American medium spicy. Owing to his ceaseless efforts, NY Dosas hit a purple patch and earned patrons from across the globe. He prides himself on having fans in as many as 45 countries.

Palaniswami Thiru Kumar owes his culinary skills as well as his success as Dosa Man of New York to his grandmother. He immigrated to New York, the Big Apple two decades ago. After taking up odd jobs at petrol bunks, construction sites and likes, he started the street food cart by pooling all his savings and borrowing a loan in 2001. Since then, there has been no looking back for him. Located at a stone’s throw from New York Penn Station, NY Dosas has been instrumental in popularizing the South Indian fare in the northeast USA.