“It has been nearly 50 years since we last stepped on the moon. We are getting ready to take humans back to the moon and beyond, to Mars,” said Subhashini Iyer, a mechanical engineer from India, who journeyed from her father’s automobile parts factory in Tamil Nadu to NASA in the US. Since 2019, she has been busy working on the Space Launch System (SLS), the most powerful rocket in the world, for NASA’s return to the moon after about 50 years.

Once again, the world will go gaga over an Indian woman and her team the moment the Space Launch System will take NASA’s spacecraft Orion to deep space starting in November 2021. Just like Dr. Swati Mohan and Dr. Vandana Verma who were lavished with a global attention for their key role in architecting the success of NASA’s Mission Mars 2020, Coimbatore-born Subhashini Iyer will be crowned a woman of the year 2021. 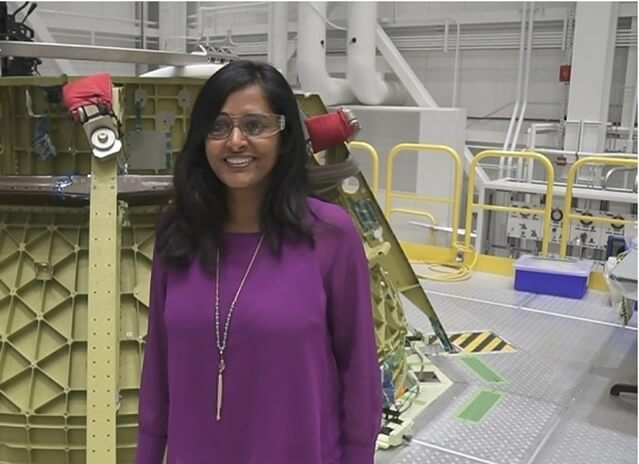 Artemis, NASA’s ambitious project to land on the moon again and recreate history, will be executed in three missions. Subhashini, along with her team from Boeing, is responsible for overseeing the Space Launch System, the principal component of Artemis. The first mission, Artemis I, will see the launch of an unmanned flight of the spacecraft Orion to the moon and Mars. The Orion will travel 280,000 miles from Earth in three weeks and collect technical data, which will help prepare the ground for the second mission, Artemis II. In 2024, Artemis III will see the landing of astronauts on the moon.

Head of the Integrated Product Team at Florida’s Kennedy Space Center, Subhashini Iyer is also responsible for providing post-production support at Boeing where the rocket’s core stage that involves propulsion system and avionics is being built. Ensuring the functional precision of the rocket is the challenge she has taken up. The Space Launch System can produce maximum 8.8 million pounds of thrust and reach an altitude of 530,000 feet in about 500 seconds before breaking away.

Subhashini is leading a diverse team of mechanical and electrical engineers from different parts of the world. “Involved with the SLS launch are engineers who have been part of the human space exploration program for 30-40 years since the shuttle days,” she said. She is proud of all the women she is working with on NASA’s Artemis mission. She said, “My manager, the director of production, test and launch, is a woman. The NASA SLS launch director, the Vice President of space engineering, and the NASA core stage element leader are also women. It is great seeing more women in the field.”

It is interesting to know that Iyer, who as a kid used to watch airplanes fly and wonder how they could float in the sky, is the backbone of NASA’s Artemis mission – the launch of unmanned and manned flights to the moon and beyond for space exploration. In her message to young engineers, she says, “Whatever hurdles come your way, you cannot be deterred from your goal, you cannot give up. We have to persevere.” Subhashini not only made her ‘American Dream’ come true, but also led India to “Where the mind is without fear and the head is held high”.