The first commercial space mission by an Indian American entrepreneur is the latest focus of the global spotlight on the Indian community in USA. Naveen Jain, co-founder of Florida-based startup Moon Express, has successfully sought approval from the US government to land on the moon. Moon Express, founded in 2010, is headquartered at Mountain View in California.

“To execute a commercial mission beyond the earth’s orbit with US government’s support is not just an ambitious project but a historic move by a private startup,” says entrepreneur Naveen Jain, who hails from the Indian State of Uttar Pradesh by birth. 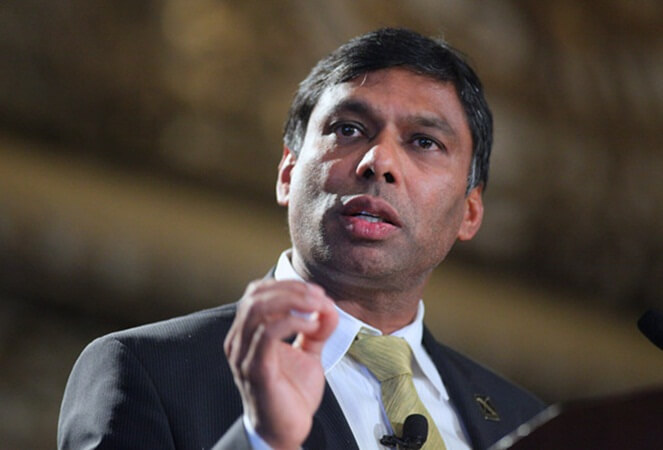 Naveen Jain, a serial Indian American entrepreneur who founded a number of companies in different niches from online search to software services, has collaborated with space entrepreneur Robert Richards to embark on the world’s first commercial space mission in the second half of 2017. A piece of scientific hardware weighing 20 pounds will be landed on the moon’s surface for asteroid mining.

The approval from the White House, the Federal Aviation Administration, the State Department and NASA is the first major step for the Moon Express founder Naveen Jain towards execution of the project which falls under the Outer Space Treaty of 1967. Private agencies are required to seek approval for space missions in compliance with this international regulatory agreement introduced by the United States and Russia.

The principal purpose of Moon Express’ upcoming space mission is to collect information about asteroid mining on the moon and make the path for commercial space tourism. To encourage more such scientific breakthroughs down the line is another purpose, according to Naveen Jain, an MBA and IIT graduate from India.

With the official approval in place, Moon Express has started developing an advanced, scalable, autonomous robotic spacecraft for the commercial space mission in 2017. The new-age spacecraft is expected to unravel the extraterrestrial mysteries of the moon and explore commercially potential resources of the moon at lesser costs of space exploration than the projects by government agencies.

Indian American entrepreneur Naveen Jain expects to explore the moon and find out its resources including platinum, diamond, gold, silver and rare elements worth ‘billions of dollars’ on the first mission. It will be followed by another mission to mine those resources and bring them to earth. He says that water on the moon is a good ingredient for rocket fuel and the fuel for human consumption.

Naveen Jain, an ex-employee of Microsoft, is also a noted columnist for the Wall Street Journal, the Huffington Post and Forbes. He is a philanthropist too.

Travel Beats is a digital publication for Indian Diaspora by IndianEagle, a leading travel organization for the Indian American community. Subscribe to Travel Beats’ free newsletter for the latest stories and news from USA and India.