Home / Features / Meet the King of Dosa, who Makes it Possible for Indian Families to Cook and Grab Quick Breakfast in USA

The morning a ladle full of dosa batter makes it to a heated pan and then spirals from the middle of the pan to the outermost edge, emitting a fresh aroma that Indian immigrants in USA are quite familiar with, it leads to a fulfilling day. The man who replaced the time-intensive preparation for dosa with his readily available dosa batter making it possible for the nuclear Indian families to cook and grab a quick breakfast in the United States, where life is a rat race, is 66-year-old Mani Krishnan from India. Next to Nestlé’s 2-minute Maggi magic, his dosa batter sold under the brand called Shastha Foods became a staple in Indian kitchens across the US and Canada over the years. 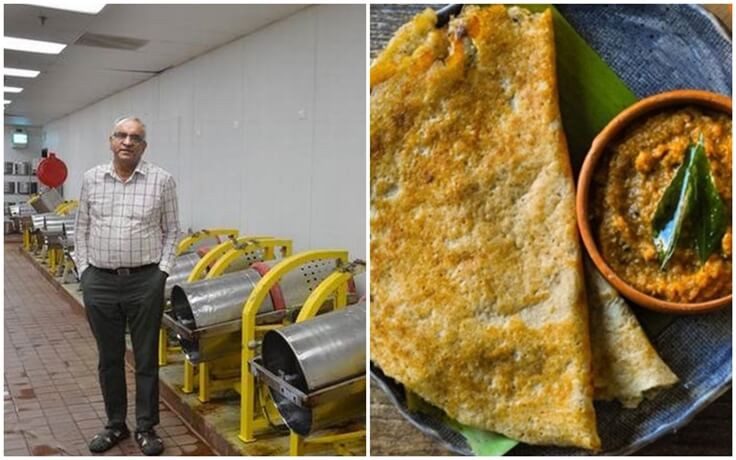 It was 1977 when he traveled to the US with a mind full of ideas as well as dreams, and joined his immediate family living in San Jose, California after graduating in commerce and following a short stint as an accountant in Mumbai. Before making his foray into the nascent Indian food market in the US, he ran an export business dealing in hard disk drives, motherboards, processors, etc. for 18 long years. After an initial success, the business hit the rocks following a bumpy ride for two decades. However, his passion to be own boss did not evaporate. Prior to exporting hardware products to IT businesses in India, he was hired for a routine job at a tech company in San Francisco – which he started disliking.

With Indians migrating to the US and yearning for authentic Indian food there during the dot-com boom in the late 1990s, Mani Krishnan hit upon the idea of selling idli and dosa batter – which took shape in 2003. He mortgaged his house, the only thing he could pawn for the potential success of his new business idea. With his wife’s support, he started manufacturing, packaging, labeling and distribution of idli and dosa batter from home, in order to cater to the growing demand for easy-to-cook Indian dishes.

Distribution of the dosa batter packs was the very first challenge that he faced. He went on to visit grocery stores in San Jose and request them to accommodate his product on a shelf. He even agreed to be paid whenever the product would sell. He had a hard time convincing the store owners about his compliance with the FDI guidelines right from manufacturing to labeling. Initially, Mani Krishnan’s dosa batter found space only in 10 stores. In spite of the best efforts he put in, the product made only 1,000 sales in the first year. By 2005, his brand, Shastha Foods, started gaining momentum as a household name in California. In 2006, the demand for Shastha Foods’ dosa batter rose in other parts of the west coast.

Today, Mani Krishnan – the founder of Shastha Foods in the US – prides himself on distributing the batter to over 350 stores and selling four packets every minute. The launch of an online portal facilitating the booking of orders for and the delivery of dosa batter and other products gave the business a competitive advantage. Shastha Foods sold over 170 million dosa batter packets in the US and Canada over the past 17 years. A remarkable journey, indeed!

However, Mani Krishnan – the king of idli and dosa batter in America – did not let his journey cease on achieving several milestones. Rather, he continues it through experimentation with varieties of dosa and idli batter, and the experimentation began at home. Today, Shastha Foods’ merchandise includes batter for multiple dosa varieties, such as oats dosa, millet dosa, brown rice dosa, and pesarattu. He makes sure to take feedback from friends, families and colleagues before moving a product to a large-scale production. Most of his products, ranging from ready-to-cook packets to sweet boxes, sell like a hotcake on such festive occasions as Ugadi and Pongal in the USA.