The City of Hyderabad drank to the ecstasy of Kuchipudi dance performance by Prashanthi Harathi, an eminent Indian American choreographer and dance instructor, on a breezy Sunday evening this month. Prashanthi Harathi, a Portland-based Kuchipudi exponent, travelled along with her troupe all the way from the northwest US to India to mesmerize her admirers and classical dance lovers in Hyderabad City.

When the sun was setting behind skyscrapers of Hi-Tech City sprinkling a plenty of red and orange hues all over the skyline, Prashanthi Harathi and her students from USA graced the amphitheater at Shilparamam, a hub of fine arts and performing arts in Hyderabad. With the audience pouring in, the Indian American Kuchipudi exponent inaugurated the program with a numinous tribute to Lord Ganesh and Goddess Saraswati. Ritwika Petluri, one of her disciples, accompanied her in the inaugural performance. 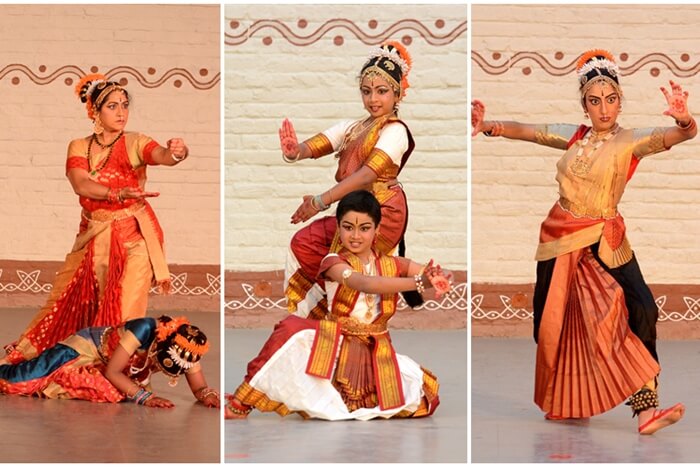 While the echoes of ovation following the dance recital of prayers to the deities were fading away, Prashanthi Harathi hit the stage for a visual enactment of Mahishasura Mardini, a story of Goddess Durga’s act of annihilating the king of demons. In this Kuchipudi dance performance, Prashanthi Harathi was accompanied by her daughter, Tanya Krishna Harathi. The mother-and-daughter duo gave an excellent account of Mahishasura Mardini in Kuchipudi, which wowed the audience. The way Tanya Krishna Harathi rhymed her steps with her mother’s on stage impeccably, was simply amazing.

It was followed by a solo performance by Kumari Ritwika Petluri. Titled Govardhana Giridhara, this piece of Kuchipudi dance performance narrates the story of Lord Krishna lifting Mountain Govardhana with his little finger to save the entire village from heavy downpours caused by the wrath of Lord Indra. Composed by Saint Sri Narayana Thirtha, it culminated in euphoria over Ritwika Petluri’s intricate movements on a brass plate to the utter amazement of the audience.

The next was Sivastakam, a heart-warming tribute to Lord Shiva, the presiding god of Himalayas. Tanya Krishna Harathi, along with another performer of her age, Aarya Aluru enacted a eulogy in honor of Lord Shiva at the Shilparamam amphitheater in Hyderabad. The young performers immaculately accompanied and complemented each other to entertain the audience with their expertise in Indian classical dance.

The Kuchipudi dance performance by Prashanthi Harathi and her disciples from USA concluded with Thillana, a pure nritta show which is distinguished by the virtue of graceful steps and sculpture-like poses. All the performers presented Thillana harmoniously, which the audience enjoyed to their heart’s content. Then they performed Mangalam to conclude the program. Mangalam is a short prayer seeking divine blessings for the wellbeing of everyone in the world.

Prashanthi Harathi is a Kuchipudi exponent based in Portland in the US state of Oregon. A postgraduate in Indian classical dance with specialization in Kuchipudi from Hyderabad Central University, Prashanthi Harathi began her career as a dance instructor in India in 1996. She moved to USA in 2007 and founded Abhinaya Dance Academy in Portland to popularize Indian classical dance thousands of miles away from home (India). She treasures over 30 years of professional experience in performing and 20 years of experience in teaching Kuchipudi.