Be it Navaratri or Durga Puja – the festival celebrates the homecoming of Goddess Shakti for the welfare of her children on earth. Goddess Durga or Gauri, as we call her different names, descends from her heavenly abode to set the things in order on earth. Likewise, a breed of educated, empowered women returned home (India) quitting their well-paying, cushy corporate jobs in the land of American dreams and joined more fulfilling pursuits to fight climate change. 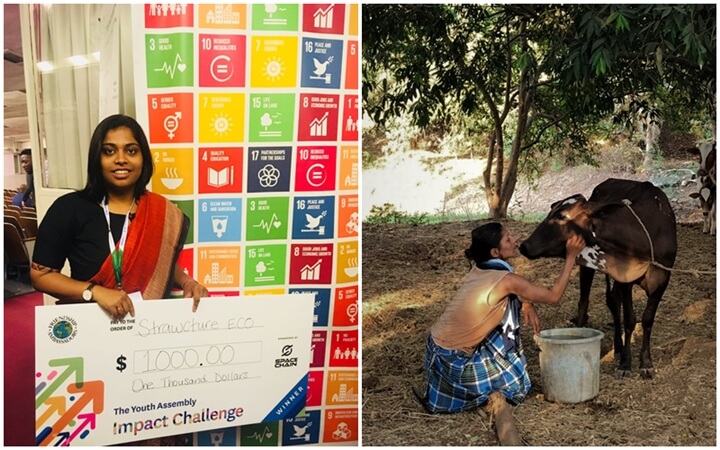 Though not a Greta Thunberg, Shriti Pandey from New York is an environment-conscious being with concerns about the worsening climate change. On completion of Masters of Science in construction management, she got a well-paying job in New York Construction Company. After a short stint there, her childhood dream of building environment-friendly, affordable houses loomed larger than her American dreams. A sustainable, eco-friendly alternative to concrete structures all over India was the call for the US-based Indian engineer to return home.

Shriti Pandey gave up her H1B visa so that her parents could be convinced about her decision to come back home. As part of the SBI Youth for India Fellowship, which she joined after returning to the roots in Uttar Pradesh, she spent time in a tribal belt of Madhya Pradesh and educated the locals on how to improve the animal husbandry occupation. The brick-and-mortar residential units of the villagers, with thermal discomfort did not elude the attention of a construction and design expert in her.

On further research on low-energy, affordable construction, she thought of agro waste as the primary raw material for building houses. The use of agro waste / agriculture residue in making recyclable construction panels not only does good to the environment but also benefits the farmers who tend to burn agricultural residues, thereby causing air pollution.

In the process, Shriti Pandey set up a green construction firm to build eco-friendly residential units harnessing the potential of her concept, which her family and friends found insignificant initially. However, her own faith in her vision of ecological homes with environmental and economic benefits was unshakable. Shriti’s construction model has been studied and examined by industrial and environmental experts who have certified that it can stand all atmospheric conditions.

She refuted all judgments and suggestions such as she should look at higher profits in urban areas instead of rural regions, saying, “For India’s economy to be strong, the rural economy needs to grow. If rural India is poor, India is poor.”

Another inspiring story of homecoming is that of Gaytri Bhatia’s in Mumbai. She gave up her American career as an environmental analyst with the US Environmental Protection Agency in Boston and chose the lesser trodden path to fight climate change back home. Today, she grows organic food in a 10-acre farm on the outskirts of Mumbai. She has employed 8 local workers to help her maintain the farm.

She credits the transformation of the farm into a thriving land of organic farming to her epiphany of the need of a paradigm shift in the modern, anti-environment lifestyle in the United States. She found organic farming the most suitable way to sow the seed of a change in our treatment of nature. Mumbai’s Gaytri Bhatia is making every possible measure to preserve and grow native varieties of seeds, while the use of high-yielding genetically modified seeds is on the rise in current times.

Every year Gaytri’s farm produces 3000 to 5000 kg of mangoes of different varieties, in addition to fruits, spices and green vegetables, such as cashew apples, wild berries, lettuce, baby spinach, moringa, lemongrass, heirloom tomatoes, atomic red carrots, etc. Some of top restaurants in Mumbai, including Smoke House Deli, Olive, and Kala Ghoda Café, are among her loyal clients taking delivery of the organic produce from her farm.

Using bio-fertilizers to enhance soil fertility and spraying cow urine to pest control are some of the keys to her success as an organic farming entrepreneur. She herself prepares nutrient-rich fertilizers using dried leaves, cow dung, fish excreta, cow urine, neem, etc. The seasonal cycle of growing, harvesting and rotating crops is religiously maintained in the US-returned Gaytri Bhatia’s farm.

She believes that if everyone does their bit to reverse the damage done to the planet without waiting on others, the earth will be the most beautiful place for us to be born on again.