After Gujarat, Rajasthan, Maharashtra, Kerala and Uttar Pradesh, Karnataka joins the race for erecting massive statues. Reportedly, a 215-meter-tall statue of Lord Hanuman will be built for Rs. 1200 crore in Hampi, a UNESCO World Heritage Site in Karnataka. Hampi is not just a popular tourist place, but home to the birthplace of Lord Hanuman. Hampi, where the ruins of the Vijayanagara Empire are eloquently telling the tales of history, is also believed to be Kishkindha, the kingdom of Vanara King Sugriva in the Ramayana. 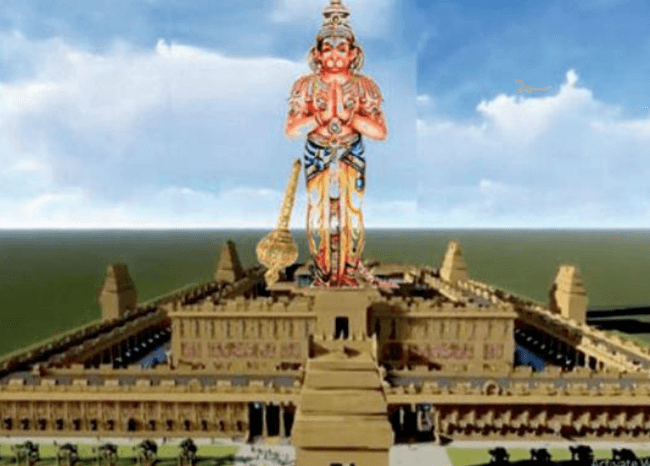 An impression of the upcoming Hanuman Statues | The Times of India

The upcoming tallest Hanuman statue in the world will be erected at the foot of the Anjanadri Hill in Hampi, Karnataka. To be made of copper or bronze, the statue will be surrounded by a Ramayana village that will be picturesquely landscaped through figurines, toys, paintings and clay work. The Hanuman Janmabhoomi Teertha Kshetra Trust, the nonprofit at the helm of building the 215-meter Hanuman statue in Karnataka, is seeking land of 50 acres from the state government. The construction will start as soon as the land is allotted.

With several other statues lining up for construction in 2020 and 2021, Karnataka is on a statue-building spree. Bengaluru’s Kempegowda International Airport will get one of the upcoming statues in Karnataka. The construction of a 108-ft tall statue of Kempegowda, the founder of Bengaluru City, is underway at the cost of Rs 75 crore. The foundation brick for the statue of Kempegowda near Bengaluru Airport was laid in June 2020.

The statues coming up in Karnataka include a 120-ft statue of Swami Vivekananda in Jigani near Electronics City in Bengaluru. Inspired by the Statue of Unity in Gujarat, the Swami Vivekananda statue will be located on a 3-acre site sprawling around a water body, which is about 10-12km from the Bannerghatta National Park. The statue is expected to be completed in a year.

To be taller than the Statue of Unity, the 705-feet Hanuman Statue in Karnataka has sent critics into a tizzy about India’s shrinking GDP and economic slowdown amid the COVID19 pandemic.