Have you ever seen the blue domain of the sky itself as beautiful as the Taj Mahal on a moonlit night, as colorful as the Holi festival and as wonderful as the Mysore Palace on Dussera? The occasion when the sky wears a motley of multiple different colors is the Kites Flying Festival in Gujarat. The city that hosts the international festival of kites is Ahmedabad, the capital of Gujarat. Since 1989, the city has been witnessing the frenzy and fervor of kite fanatics. 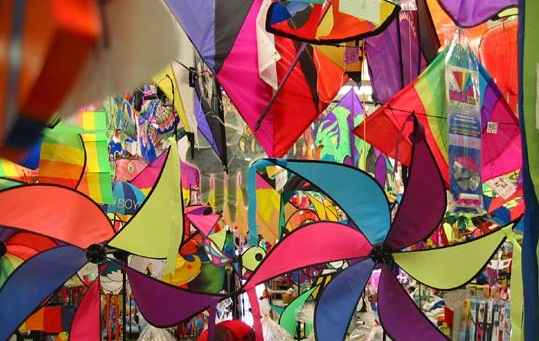 Thousands of kites of different hues and designs make their way to the sky over Ahmedabad. Most of the kite flyers are seen at war with each other. Enthusiasm and joy define the festive ambience of the day. When a kite flyer is defeated (the defeat is marked by the cutting of the thread of his kite by the other kite flyer), the atmosphere echoes “Kai Po Che”, a Gujarati expression of joy, meaning “I have cut” in English.

Kite is a Chinese invention that dates back around 2800 years ago. With the time wheeling on, kite has evolved into a medium of entertainment from a thing of use for weather forecasting, offering of prayers to the God, and aerial communication to enemies. It has captured the imagination of merrymakers of all age groups. The International Kite Flying Festival on January 14 is a great occasion for both kite makers and kite flyers alike. 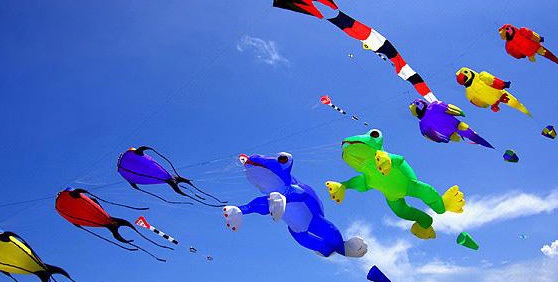 January is one of the winter months in India. January 14 is celebrated as Makar Sankranti all over the country. The boundless enthusiasm of kite flyers braves the odds of winter and warms up the atmosphere even when cold is nipped in the air. Kite makers from different parts of the world fly to Gujarat and sell their colorful stuff in the markets of Ahmedabad. Variety, a symbol of life, is seen in the colors, designs and styles of their kites.

Malaysia’s Wau-balang kites, Japan’s Rokkaku kites, Indonesia’s Llyng-llyanghave kites and China’s Silk kites are seen in the sky over Ahmedabad. What else to see on the blue canvas? 500 kites threaded with a single string. Made by a local kite maker, it is a must-not-miss extravaganza during the festival. Sports kites, hand-painted kites, kites with mythical figures, dragon kites and cartoon kites are some of the myriad varieties to behold. Kite flying competition amidst cheers is another pull of the festivity. 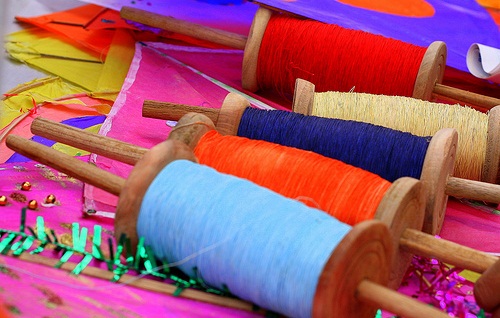 Ahmedabad falls over itself to prepare for the festival one month before January 14. Everyone is seen busy making manjha, a special thread coated with dust of glass for sharpness, to cut the other kites and defeat their opponents. A light and sound show about the history of kites is another attraction of the Kites Flying Festival in Ahmedabad. Kite training workshops are also held in some parts of the city.

Ahmedabad is a must visit during Gujarat’s Kites Flying Festival. Travel to Ahmedabad and catch up with your childhood friends with who you used to fly kites.