Gender gap in technology is one of the most critical issues in the United States. Indian American Reshma Saujani daringly took on the issue and founded Girls Who Code to address it. Why Forbes Magazine recognized Reshma Saujani as one of the “5 Fearless Female Founders to Follow in 2018” is no wonder.

The first Indian American woman to have run for the US Congress as a Democratic leader in 2010, Reshma Saujani is a lawyer, politician and philanthropist. Born in the Gujarati Indian community of Chicago, Illinois, she is the founder and CEO of Girls Who Code, a national non-profit organization initiating young women into the world of technology to alleviate the gender gap in technology. 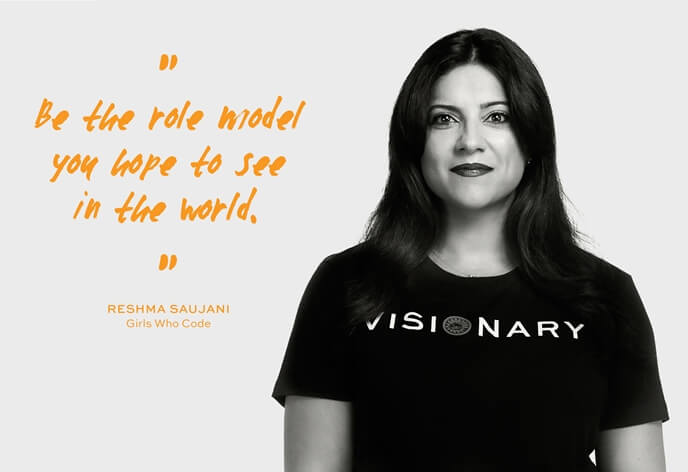 During her political campaigns, Reshma Saujani made a visit to schools. Gender inequality in the computer classes took her aback. In order to bridge the gender gap between men and women in technology, she founded Girls Who Code as an experiment which has become a national movement over the years. The only mission of Girls Who Code is to empower girls with computing skills for today’s technology-driven job market.

A graduate in political science and speech communication from the University of Illinois, Reshma Saujani previously served as Deputy Public Advocate for New York City. She believes that Girls Who Code will reach out to over 50,000 girls in all US states and territories by the end of 2018. A recent event involving female engineers complaining about gender discrimination and sexual harassment in the Silicon Valley bears evidence to the importance of such a dedicated, non-profit technology foundation as Girls Who Code.

“Teach girls bravery, not perfection” was her message to the audience during Reshma Saujani’s TED Talk in 2016. It raised a nationwide wave of conversations about how girls are raised in a country like United States which is identified with technology. She said unhesitatingly in her TED Talk:

One of the 5 Fearless Female Founders to Follow in 2018, Reshma Saujani has authored two books – Girls Who Code: Learn to Code and Change the World, and Women Who Don’t Wait in Line. While her first book is about why girls should learn coding, the second book advocates her view about a new model of female leadership.

Reshma Saujani’s Girls Who Code has united girls from clubs in rural Oklahoma, to homeless shelters in Massachusetts, to the country’s most prestigious private schools for their passion to use problem-solving technology in day-to-day lives. Previously, Reshma was named on the 40 under 40 list by Forbes, and Innovator of the Year by the Wall Street Journal. She also made her way to New York Daily News’ 50 Most Powerful Women in New York City, and Business Insider’s 50 Women Who are Changing the World.

Currently, Reshma Saujani resides in New York City with her family. The following from our continued series of inspiring stories of Indian Americans might interest you: