In the Ramayana age of ancient India, Ravana, the chief of demons, was believed to have built a staircase to Heaven. According to those who have been to Sri Lanka, there are still ruins of the celestial staircase. However, its authenticity is questionable. In the middle ages, religious fundamentalists in Europe used to book tickets to Heaven for the god-fearing people from the upper reaches of society. These age-old stories are often discarded as mere myths. In the present decade of engineering and technology, the staircase to Heaven seems to come alive as Space Elevator. 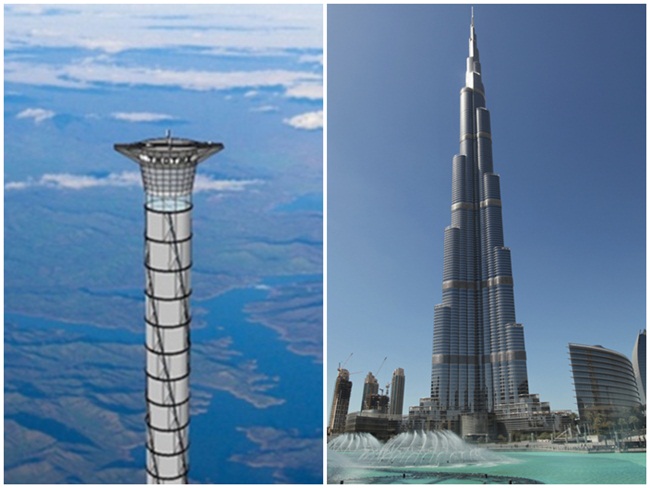 Yes, Space Elevator is a would-be concrete version of the mythical staircase to Heaven but in a different hemisphere. Thoth Technology, a Canadian firm, has been given the patent to proceed with the plan of executing a most ambitious project – construction of the world’s first Space Elevator – which will be 20 times taller than the world’s tallest Burj Khalifa in Dubai. Thoth Technology proposes that the freestanding tower Space Elevator will lift people to an incredible height of 12 miles above earth for a joyride.

The top of Space Elevator will act as a Launchpad for spacecraft. The Ontario based firm claims that it will save on the cost of launching spacecraft into the orbit of the moon, Mars and other planets. Even rockets can be launched from and landed at the top of Space Elevator, where there will be a system of refueling spacecraft too. Reportedly, the tech firm has come up with construction plans. The revolutionary tower will have an electric elevator for 20 km.

Space Elevator will have several other utilities including support for satellite communication and renewable wind-energy generation. The construction will be equipped with self-landing rocket technologies to usher in a new era of space transportation, according to Caroline Roberts, CEO and President of Thoth Technology, Ontario.

Inflatable sections and flywheels will be used to ensure dynamic stability of the avant-garde structure, which will be architected to avoid ‘complication of the geostationary orbit’ at the meeting point of atmosphere and space. As per the patent document, the tower of Space Elevator will help in scientific research by facilitating delivery of equipment, tools and other objects to a certain height above the surface of earth.

The CEO of Thoth Technology says that Space Elevator will be accessible to tourists as well. Those who cannot afford space tourism will get a taste of space environment above and a glimpse of earth’s blue atmosphere below from a certain level of Space Elevator.

Is Space Elevator an altogether new idea? It may be a new idea but the concept of a freestanding tower to reach the geostationary orbit from earth’s surface dates back to 1895 when Konstantin Tsiolkovsky, an eminent Russian scientist, was impressed by the height of the Eiffel Tower. According to him, an object would gain horizontal velocity while going up through the tower under compression and remain suspending in the geostationary orbit once released from the top of the tower. Such a colossal construction under compression remained a dream due to no availability of materials with adequate compressive strength.

Scientists of the next generations reimagined and reinvented the concept until Arthur C. Clarke’s science fiction, The Fountains of Paradise, introduced space elevator to a global audience. The novel depicts construction of a space elevator on a mountaintop in some fictional island. Then, the building of a space elevator found a mention in Charles Sheffield’s debut novel, The Web Between the Worlds. In 1993, author Kim Stanley Robinson took on the building of an imaginary space elevator on Mars by colonists to exploit celestial resources for enhanced prosperity on earth, in his novel Red Mars. In 2000, Jumping Off The Planet by David Gerrold talks about a mature elevator technology. The Highest Frontier by Joan Slonczewski depicts construction of a space elevator with self-healing cables of anthrax bacilli, special bacteria that can remake cables out of decay.

Finally, the concept of a space elevator has become a plan outside of books. However, building a beyond-the-sky structure 20 times taller than Dubai’s Burj Khalifa is easier said than done. If the scriptural myth of the staircase to Heaven becomes a concrete reality, it would be a cosmic step towards reaching the infinite. – Indian Eagle

Indian Eagle may not get you tickets to space but promise to book cheap air tickets to India from US cities. The best flight at the lowest fare is no less exciting than a joyride in space!

One thought on “Interesting Facts: World’s First Space Elevator to be Taller than Dubai’s Burj Khalifa”