Maharashtra Tourism will fly to the United States and celebrate Diwali with NRIs in New York on September 20, 2014 like the previous year. Diwali, a major festive and cultural celebration in India, helps to connect Indian Americans with their root. The celebration and the accompanying cultural programs will be held at Times Square in New York.

Apart from celebration of Diwali at Times Square, Maharashtra Tourism will host a B2B roadshow at the Indian Consulate in New York City. The Diwali celebration is meant to connect NRIs with Indian culture, and the roadshow is purposed to promote the tourist attractions of Maharashtra. Some of the state’s hotels, wildlife tour operators and hot air balloon service providers will join the roadshow which will be held a day before the cultural celebration. 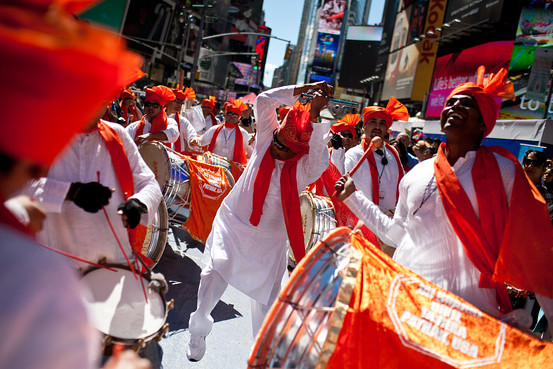 A picture of Diwali Celebration at Times Square in 2013

This is the second edition of Diwali at Times Square. The first edition in 2013 elicited huge response from the Indian Americans and was attended by more than 5 lakh visitors. It encouraged Maharashtra Tourism to visit New York City and mingle with NRIs over the Diwali celebration once again. “We are looking to celebrate Diwali on a bigger scale and receive warmer response this year. We chose Times Square as venue as it is the busiest and most frequented hub in the United States,” Chhagan Bhujbal, Minister for Public Works & Special Assistance Department and Tourism, Government of Maharashtra, said.

India will celebrate Diwali on October 23 this year. The purpose of organizing Diwali Celebration at Times Square in New York on September 20, one month before the actual date, is to fetch NRIs and foreign tourists from the US to Maharashtra and other states of India in the next months. Maharashtra Tourism Development Corporation will promote Aurangabad, Kalhapur, Shirdi, Malvan, and the hill stations of Maharashtra during the festive celebration and the roadshow. Besides, Mumbai will be promoted as Indian film tourism destination.

The day-long Diwali celebration will begin with fireworks to dazzle the skyline of Times Square, and an orchestrated laser light show which will be followed by dance performance, traditional Indian fashion show, photo exhibition, breaking of dahi handi, rangoli painting competition, and Indian culinary extravaganza. A film on major tourist attractions of Maharashtra will be shown to attendees. The female audience can take part in workshops on sari draping, Mehendi design, Maharashtrian cooking, etc. Handloom and handicraft items of the state will be distributed to familiarize the audience with the rural heritage of India.

Ranbir Kapoor and other noted Bollywood actors rocked the state and graced the Diwali celebration at Times Square in 2013. Encouraged by Bollywood actors’ popularity among the NRIs, MTDC has planned to organize a concert, “Light Up Times Square” which will showcase electrifying performance by some of the most popular names in Indian Cinema. This Maharashtra Tourism promotional campaign also incorporates traditional dance performances like bhangra and dandiya by a few Indian artists.

IndianEagle, the only reliable travel partner of NRIs, books US to India flights at the lowest airfares throughout the year. Online booking of cheap flights to India for Diwali festival in October is going on.