August 7, 2020 was not as ill-fated a day as January 24, 1966 when Air India flight 101 crashed and caught fire at Mont Blanc in France while en route to London. The Air India Express plane crash at Kozhikode Airport would have been more fatal if it had caught fire. The AI Express plane skidded while landing amid low visibility caused by heavy downpours, overshot the rain-soaked hilltop runway, fell 35 feet into the valley and broke into two pieces claiming 18 lives out of the total 191 on board.

In a similar incident at Mangaluru Airport in 2010, an Air India Express flight from Dubai skidded off the tabletop runway, crashed and blew up. The Mangaluru airport crash killed 158 of 166 persons aboard as the plane exploded into flames. Luckily, the Kozhikode-bound Air India Express flight had a narrow escape from what could have been a deadlier disaster with large-scale human casualties if the fuel tank of the plane had gone up in flames. The toll from the tragedy was limited to the demise of 18 people. 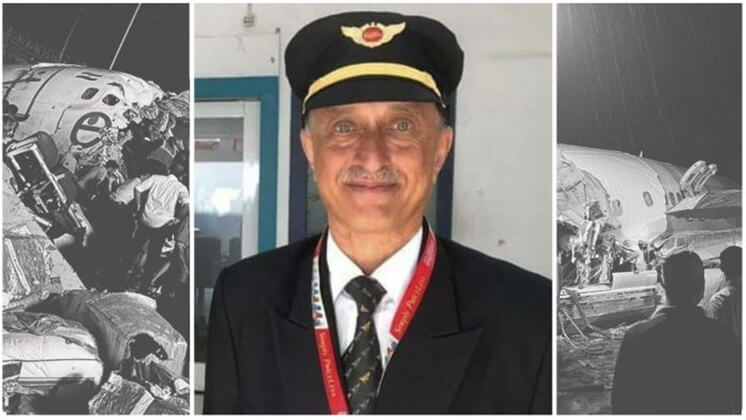 The momentary thought and quick action of one of the two pilots – Captain Deepak Vasant Sathe and First Officer Akhilesh Kumar – saved most of the passengers in the Air India Express crash at Calicut International Airport, Kozhikode. Captain Deepak Vasant Sathe, a decorated officer from the Indian Air Force, switched off the engine the moment the plane overshot the Kozhikode Airport runway. His prompt action, even in the face of death, saved many lives on board by preventing the aircraft engine from blowing up during crash.

Equally skilled in the dynamics of operating MiG-21 Fighter jet and Boeing 737, Winger Commander Capt. Deepak Vasant Sathe took to civilian flying after voluntary retirement from the Air Force. With 22 years of flying experience in the Air Force, he joined Air India. He had earned the ‘Sword of Honor’ in 1981 from the National Defence Academy. In the Air India Express crash at Kozhikode, his lightning action was a rare instance of professionalism that pilots from across the world have saluted to.

In his condolence speech, the civil aviation minister Hardeep Singh Puri said that Captain Deepak Vasant Sathe landed commercial planes 27 times at Kozhikode Airport before the crash on August 7, 2020. He was one of the most accomplished aviation commanders with over 10,000 flying hours. His mother, Neela Sathe, said that he was a fighter. He had survived multiple injuries to the skull in an air crash through six months of hospitalization while serving the Indian Air Force in the 1990s.

The Air India Express plane that met with a tragedy at Karipur Airport, Kozhikode was a repatriation flight carrying Indians back home from Dubai, where they were stranded amid the COVID19 pandemic. It was part of the government of India’s Vande Bharat Mission.