For the first time in the history of America, the White House will see a significant presence of the Indian American community – the highest-earning ethnic group in the US. The collective excitement that has been building up since Kamala Harris was declared Joe Biden’s running mate will be at fever pitch once the handpicked Indian Americans take office on January 20. President-elect Joe Biden cherry-picked distinguished Indian Americans from different niches for key roles in various departments of the federal government, including the Department of Justice, the Office of Presidential Personnel, National Economic Council, National Security Council, the Office of Digital Strategy, and the Office of Management and Budget. Furthermore, such key positions as Surgeon General of the US, Associate Attorney General, Deputy Press Secretary, and Director of Speech Writing in the upcoming Biden-Harris cabinet are Indian Americans.

Indian-origin Neera Tanden will be overseeing the budget for various federal agencies as Director of the White House Office of Management and Budget. Brought up by a single mother, she journeyed from relying on federal aids to the political corridor heavyweights. Dr. Vivek Murthy is named as the US Surgeon General in the Biden-Harris administration. 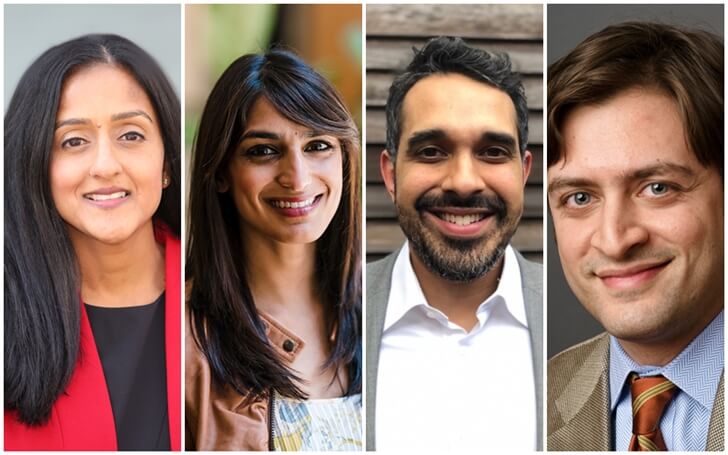 Indian American Vanita Gupta, who led the civil rights division at the Department of Justice in the Obama regime, has been named for a key position in the Biden-Harris administration. One of the most noted and respected civil rights attorneys in America, Vanita Gupta would be the first Associate Attorney General of color at the US Department of Justice. She is expected to revive the people of America’s trust in the justice department, make sure “Equal Justice Under Law” prevails across the country, and help restore the integrity of the department so it serves the interests of the nation, not a presidency.

President-elect Joe Biden’s transition announcement reads, “She has spent her career fighting successfully for greater equity in our justice system and advancing the rights and dignity of every American. She is a successful consensus builder on tough issues, with years of experience managing complex settlements.” Born to an Indian immigrant couple in Philadelphia, Vanita is an alumnus of New York University School of Law. Previously, she served as the Deputy Legal Director of the American Civil Liberties Union.

Indian-origin Aisha Shah from the state of Louisiana has been appointed for a key role at the White House Office of Digital Strategy in the upcoming Biden-Harris regime. Kashmir-born Aisha will work as Partnerships Manager and report to Rob Flaherty, Director of Digital Strategy for President-elect Joe Biden. She holds the experience of working as a digital partnerships manager for the Biden-Harris electoral campaigns. She currently serves as an advancement specialist for the Smithsonian Institution. An expert in corporate communications across digital mediums, Aisha served as a strategic communications specialist at Buoy, an integrated marketing firm specializing in social impact communications, where she enabled nonprofits to use pop culture as a tool for social change. Her portfolio also shows her previous work experience as an assistant manager for the Corporate Fund of the John F Kennedy Center for the Performing Arts. Once the Biden-Harris takes office on January 20, Aisha will be part of a dynamic and diverse Digital Strategy workforce for a new America.

Indian American Gautam Raghavan, who is currently serving as deputy head of presidential appointments on Joe Biden’s transition team, is named to the upcoming cabinet as deputy director in the Office of Presidential Personnel. Prior to being roped in to the transition team, he served as an adviser to the Biden foundation and as the chief of staff to Republican Pramila Jayapal. He also worked as the vice president of policy for the Gill Foundation, a most prestigious institute advocating for the LGBTQ equality. Former President Barack Obama appointed him as a liaison to the LGBTQ community, and the Asian American & Pacific Islander community.

Born in India and raised in Seattle, Gautam Raghavan lives with family in Washington DC. In the Obama regime, Indian American Gautam Raghavan led the White House’s initiative “Don’t Ask, Don’t Tell” that allowed gay people to join the US military without requiring them to disclose their sexual orientation.

Among the Indian Americans in the Joe Biden administration, Bharat Ramamurti is named as Deputy Director of National Economic Council (NEC). A resident of Boston, he is a distinguished alumnus of Harvard College and Yale School of Law. An attorney and political advisor by profession, Bharat Ramamurti is currently a member of the Congressional Oversight Commission that oversees the Federal Reserve Board’s management of the stimulus packages and loan programs under the CARES Act (the Coronavirus Aid, Relief, and Economic Security Act). Previously, he served as a principal advisor for banking and economic policy to Senator Elizabeth Warren until 2019.

Among the Indian Americans who are named to the Biden-Harris team, Vinay Reddy is all set to make it to the White House as Director of Speechwriting. A resident of New York, he has associated with the federal government since before Joe Biden won the presidential elections 2020. In the Obama regime, he served as a senior speechwriter for the Department of Health and Human Services and the US Environmental Protection Agency. He was roped in as a deputy speechwriter for the Obama-Biden’s re-election campaigns. It is none other than Indian American Vinay Reddy who played a senior communication adviser and speechwriter for the Biden-Harris electoral campaigns. He was raised in Dayton, Ohio.

A member of the Biden-Harris transition team for State Department Agency review, Sumona Guha was a principal advisor on national security issues to former Vice President Biden in the Obama cabinet. A graduate of Johns Hopkins, she led the South Asia foreign policy for the Biden-Harris campaign. She has also worked as a Foreign Service officer in the State Department. Currently, she is Albright Stonebridge Group’s senior vice president.

Among the Indian Americans who Joe Biden named to the White House, Sabrina Singh will serve as a Deputy Press Secretary and Vedant Patel will be an Assistant Press Secretary. A versatile communication expert, Sabrina Singh has the rare experience of working on communications for presidential campaigns from Hillary Clinton to Kamala Harris. Former Deputy Communications Director for the Democratic National Committee, she was appointed as a press secretary for Kamala Harris after the latter was declared as Joe Biden’s running mate. She was also a communication advisor for billionaire Michael Bloomberg’s presidential campaigns.

California-based Vedant Patel will play an Assistant Press Secretary in the White House. He was a senior spokesperson of Joe Biden’s Presidential Inaugural Committee. Gujarat-born Vedant Patel has served as Communications Director to Congresswoman Pramila Jayapal and Mike Honda, a former Republican.

Shanthi Kalathil is all set to make it to the White House as Coordinator for Democracy and Human Rights at the National Security Council. An Indian-origin Californian, Shanthi graduated from California University, Berkeley and the London School of Economics. A published author, she has the experience of reporting for the Asian Wall Street Journal, Hong Kong. Her work portfolio shows that she worked for the World Bank, the Carnegie Endowment for International Peace, the Aspen Institute, and the US Agency for International Development. At present, she is senior director of the International Forum for Democratic Studies.

2 thoughts on “Indian Americans: Handpicked Cherries on the Cake for Biden-Harris Administration”