The latest update, June 23, 2022: The Akshardham Temple, New Jersey added a research institute to its Robbinsville site. Inaugurated on June 18, the BAPS Swaminarayan Research Institute is “the first such center of learning and research of Indian languages and Hindu scriptures in the Swaminarayan tradition to open in the United States.” The recitation of Vedic prayers and the chanting of Sanskrit slokas by children followed the inaugural ceremony which was live telecast the world over. Over 115 representatives from more than 50 Hindu temples and organizations attended the auspicious event. Mahant Swami Maharaj joined the lamp lighting ceremony through a virtual medium from Ahmedabad and said, “the BAPS Swaminarayan Research Institute seeks to promote the highest level of academic excellence in all branches of study.”

The BAPS Akshardham Temple in Robbinsville, New Jersey is one of the largest temples in the United States. The temple complex sprawls over 160 acres. A seat of spirituality, divinity, Hinduism and humanitarianism, the temple opened its door to devotees in 2014. Incepted in 2010 under the supervision of Pramukh Swami Maharaj, the making of BAPS Swaminarayan Temple in New Jersey is a story of amazing facts. The construction of such a grand, magnificent Hindu temple thousands of miles away from India was a multifaceted process from Europe to India to the United States. Made of chiseled Italian marble, this New Jersey Indian temple is a wonder in itself. 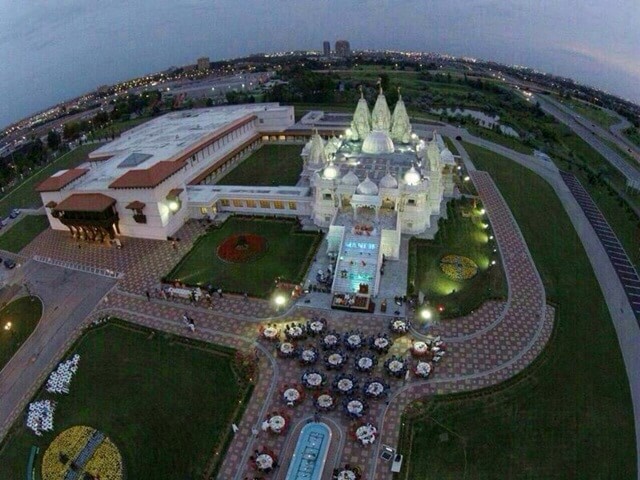 One of the most interesting facts about the making of the Akshardham Temple in New Jersey is that stone marble was sourced from Europe and handcrafted in Rajasthan for years. As many as 2000 talented artists in Rajasthan hand-carved the marble stones into beautiful pieces which were assembled two times. For the first time, the marble pieces were assembled in India to check if they would fit accurately and then they were subsequently numbered. A team of accomplished craftsmen organized and assembled the pieces in USA, according to their numbers.

It was quite challenging to transport tons of marble from Europe to USA in a certain time frame. Each of the stones traveled 21,500 miles from Europe to India to America, according to the temple authority.

The BAPS Swaminarayan Temple in New Jersey is beautiful both outside and inside. It is encased with a colossal mandap for external protection. The 135-ft wide mandap with delicate engravings on pillars stands 55 feet tall. The main gate of the mandap, called Mayur Dwar, is a major attraction of the temple. The Mayur Dwar is meticulously adorned with 236 sculptures including peacocks, elephants, monks and devotees carved out of marble.

The mandap comprises a grand prayer hall which is spacious enough to accommodate 1000 people at a time. The first phase of the temple complex comprises an activity center for the youth, a rest house for visitors and a food court. The second phase of the temple, which is said to be greater than the first phase, will be completed and inaugurated in 2017. The beautification of the temple and its surrounding is influenced by a rich mix of the architectural styles of south and north Indian temples.

The main building of the BAPS Swaminarayan Mandir in Robbinsville, New Jersey is a 4-floor structure. There is a permanent exhibition dedicated to the heritage, history and culture of India. The ornate pillars, panels, walls and ceilings depict stories of the Ramayana, the Mahabharata and ancient scriptures. The halls are dotted with life-size idols of spiritual leaders and monks from the Indian Hindu community.

The construction of the temple has been a complex, colossal, cumbersome process which could have not been initiated and completed without the combined dedication and service of volunteers from the Indian community in USA. A total of 4.7 million man hours spent by craftsmen and volunteers of all ages went into the making of the largest Hindu temple in USA, which is apparently not visible to the naked eye. The Indians in New Jersey and in other states came forward to devote their time in all possible ways, including preparing food for artisans, cleaning up the construction site, etc.  On completion of the entire construction, the cost would up to $150 million.

Travel Beats is an Indian American Community portal by Indian Eagle, a leading travel organization for Indians in USA. Subscribe to Travel Beats’ free newsletter for latest news, stories, and events related to the Indian community in America.