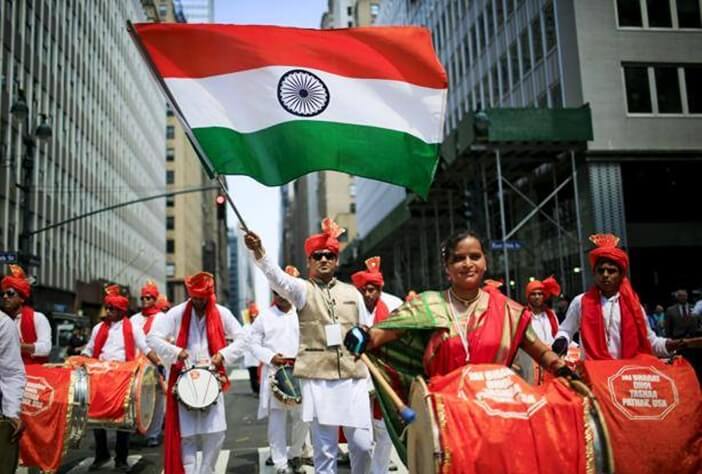 Festival of India in Atlanta, Georgia

Atlanta will soak in Indian culture and heritage at the Festival of India on August 5. First held in 1997 to commemorate the 50th Independence Day of India, the festival became one of the biggest Indian Independence day events in Atlanta. Among the most-awaited Atlanta Indian events in August 2017, the 21st edition of the festival will celebrate India’s 71st Independence Day with mouthwatering dishes from various Indian cuisines and cultural programs on Indian performing arts. The event will also feature petting zoo for kids, shopping booths and seminars on different topics. Being hosted by India American Cultural Association, the event will be held at Infinite Energy Center in Duluth.

Are you looking for the top Indian Independence Day events in Los Angeles? Then you should definitely show up at the India Independence Day in California’s Chatsworth on August 26. Among the August 2017 events for Los Angeles Indian community, it will offer Bay Area Indians an amazing chance to take part in Indian Independence Day celebrations in California. The Desis can have tryst with Indian culture, heritage and food as the event venue will have several booths dedicated to Indian food and cultural performance. There will also be many fun programs for kids besides a health fair. The event is sponsored by Emirates Airlines and the India Association of Los Angeles at Chatsworth High School in California.

Among the Indian Independence Day celebrations in Fremont, the 2017 FOG India Day Parade in Fremont on August 13 celebrates whatever is Indian to the core. Among the biggest Indian parades in USA, it features majestic processions of Grand Marshals riding more than 100 open-top cars, 50 colorful floats, cultural presentations, etc. Expected to see the participation of over 150,000 people, it will surely be on the list of events for Indians in San Francisco in August 2017. Paseo Padre Parkway in Fremont is the venue for the grand parade.

Among the upcoming Indian Independence Day celebrations in Seattle, Jai Ho! Bollywood Party will make Indians in Seattle celebrate the 71st anniversary of Indian independence by shaking their legs to some of the best Bollywood songs. The best of Seattle Indian events in August 2017, it will be a great opportunity to socialize with the fellow Desis. The party will also feature eminent DJ Ki and other special guests for entertaining the audience. Make sure to wear either orange, white and green clothes or traditional Indian attires as there is a dress code. Being hosted by DJ Prashant, the dance party will be held on August 12 at the Crocodile Club in Seattle.

Parade of India in Austin, Texas

Indians in Stafford are gearing up to take part in the 71st Independence Day celebrations in Houston at the Magnificent India festival on August 20. One of the best August 2017 events for Houston Indians, it will be an ethnic extravaganza full of cultural programs. While Indian kids can participate in quiz and elocution contests, the grown-ups can catch up with their fellow Indians over appetizing Indian dishes and drinks. The Riyaaz Qawaali music concert is another highlight of the event. Being organized by the non-profit India Culture Center, it will be held at Stafford Centre.

Indians in Portland are about to experience the culture, food, traditions and heritage of India like never before during the 71st Indian Independence Day celebrations in USA. One of the amazing Portland Indian community events in August 2017, the India Festival 2017 will commemorate India’s 71st Independence Day with dance, food and music. The cultural gala includes also children’s craft workshop, rangoli making and sari tying in its schedule of entertaining programs for Portland Indians. Hosted by India Cultural Association Portland, the India Festival 2017 in Portland will be held on August 13 at Pioneer Courthouse Square.

Indian Eagle is a leading travel partner of Indians in USA for booking their flights to India from US cities. The lowest airfare along with the best service is guaranteed. Indian Eagle’s Indian American community portal, Travel Beats publishes the latest tourist, travel, visa and immigration news.