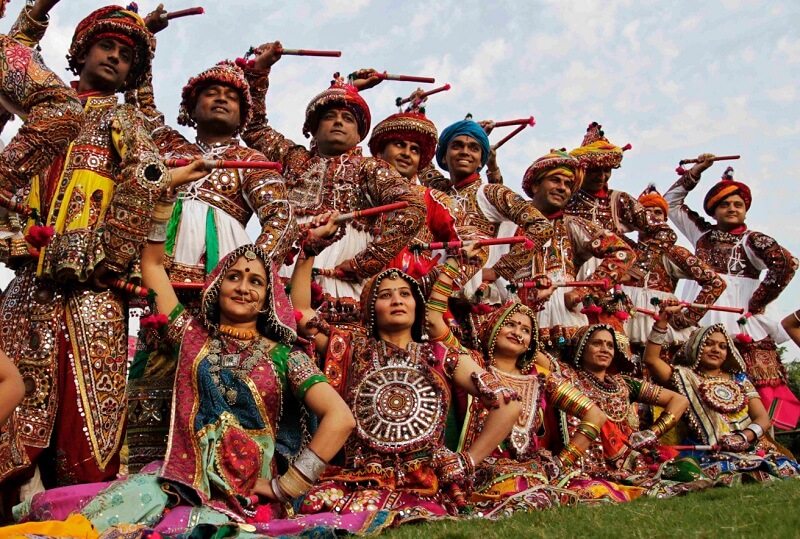 Gujarat culture and heritage is among the most amazing and richest ones in the country. Unique and diverse, the cultural heritage of Gujarat is an incredibly fascinating one. Also, there are several awesome places to visit in Gujarat. Scores of people regularly visit Gandhinagar, the state’s capital. The largest city of Gujarat, Ahmedabad, is also among the most-frequented cities in the state. Rann of Kutch, the great Indian white salt desert, is among the must-see attractions in Gujarat. For those who wish to know more about this fascinating state, here’s our guide to Gujarat culture and heritage.

Art and Culture of Gujarat:

An amalgamation of various traditions and cultural beliefs, multiculturalism runs in the very veins of Gujarat culture and heritage. Handicrafts of Gujarat are famous not just in India but across the world as well. Popular items to buy include Gujarati jewelry, furniture, embroidered items, patola saris, mirror work, metal work, leather work, and baked clay articles among other things.

Dance, music, and other art forms are a huge part of Gujarat culture and heritage. Sugam Sangeet is the folk music form of Gujarat while the four major dance forms comprise Garba, Dandiya Raas, Garbi, and Padhar. Even if you happen to be visiting on last minute flights for a work trip, make sure to catch some of these lively folk performances.

Gujarati language is spoken by the natives of Gujarat. Derived from Sanskrit, it is an Indo-Aryan language spoken widely across the world and not just in Gujarat. The other regional dialects spoken here include Kutchi, Charotari, Kathiawal, and Surti. However, apart from Gujarati language dialects, there are several other languages spoken in Gujarat by a section of the natives of its neighboring states. Some of these languages spoken are Marathi, Hindi, Marwari, Sindhi, and a bit of Urdu. Thereby, the countless Gujarati languages form a huge part of the fascinating Gujarat culture and heritage.

Customs and Religions of Gujarat:

Several religions peacefully coexist in the state and have a significant impact on Gujarat culture and heritage. Owing to this, the customs and traditions of Gujarat are incredibly diverse with a majority of Gujaratis believing in a number of gods and goddesses. You will find a spirited mix of Hinduism, Jainism, Islam, and Buddhism demonstrated by the Gujarati people. Thereby, the natives embody a balanced lifestyle along with an enrichment of artistic traits and a mix of varied religious practices. Birth, marriage, and thread ceremony are the majorly celebrated observances. Highly ranked Brahmins are the only ones who can perform the rituals associated with these ceremonies.

Also popularly referred to as Queen of silks, Patola silk forms a major part of the traditional dress of Gujarat. An irreplaceable part of Gujarat culture and heritage, the traditional wear of Gujarat often embody block prints and tie-dye designs. Gujarati brides deck themselves in zari and silk-woven saris of Panetar and Gharchola. The women of Kutch wear Abhas, a distinct traditional wear. For the ultra-festive season of Navratri Mahotsav, women choose to wear Chaniya cholis while the men wear a dress known as Kedia. Also, the silver Pachchikam jewelry that traces its roots to Kutch is a prominent fashion trend in Gujarat.

Gujarat dress and food form a vital part of Gujarat culture and heritage with a vast majority of Gujaratis being pure vegetarians. You will find that the flavors of Gujarati dishes are a mouthwatering blend of spicy, sweet, and sour tastes. The most popular Gujarat culture food items are dhokla, khandvi, fafda, undhiyon, dal wada, handvo, thepla, khakhra, gathiya, and dal dhokli. Whenever you visit the state, be it on economy or business class flights, do try the traditional Gujarati thali. Typically, it consists of dal, rice, roti, vegetables, salad, farsan, and chaas to be followed by a lip-smacking dessert. For Gujaratis, a typical dinner consists of khichdi-kadhi or bhakri-shak.

Work is a significant aspect of Gujarat culture and heritage. While most of the Gujaratis are businessmen, the commercial capital of Ahmedabad is a leading textile city. It has helped Gujarat rank among the topmost industrial cities in India. Gujarat is also home to a large number of airports with its most significant one being the Sardar Vallabhbhai Patel International Airport (AMD) at Ahmedabad. The airport is well-connected to other major Indian cities via cheap domestic flights. Several international travelers, especially in flights from USA, arrive here as well.

The actual vibrancy and colors of Gujarat’s diversity can be witnessed via its spectacular festivals and fairs. Scores of people book cheap flights for a visit to this remarkable state during popular festivals such as Navratri Mahotsav, Rath Yatra, Deepavali, and kite festival. Popular fairs depicting Gujarat culture and heritage include Mahadev fair, Bhadra Purnima Fair, and Shamlaji Melo. The annual Rann Utsav fair held at the Rann of Kutch is an absolute must-have experience! The vibrant festival is an extravagant carnival of Gujarati music, dance, and stunning natural beauty.

What is the traditional dress of Gujarat?

The traditional dress for Gujarati women is called Chaniya-choli or Ghagra-choli. Chaniyo, similar to a lehenga, comes in vibrant colors and is decorated with intricate thread or mirrorwork. It is paired with choli, an equally vibrant short upper garment. Most Gujarati women drape a chunni/odhni/dupatta over their heads. The traditional attire for men consists of chorno (a type of stitched dhoti) and kediyu (a frock-like kurta with frills). They also wear a traditional turban called Phento.

What is Gujarat’s traditional dance?

Garba is the most popular traditional dance form in Gujarat. This highly energetic dance performance is a major highlight of the Navratri celebrations in the state. Dandiya Raas, Bhavai, Tippani, and Vincchudo are other popular folk dance forms of Gujarat.

What is Gujarat’ special food?

Dhokla, khakhra, khandvi, fafda-jalebi, khaman, thepla, and dabeli are some of the most famous Gujarati delicacies that are available almost anywhere in India.

What is the main festival of Gujarat?

Gujarat celebrates several festivals, including popular Indian festivals like Holi, Deepavali, and Janmashtami and cultural festivals such as Rann Utsav, Modhera Dance Festival, Rath Yatra, etc. The nine days of Navratri are celebrated with much pomp and fervor in Gujarat.