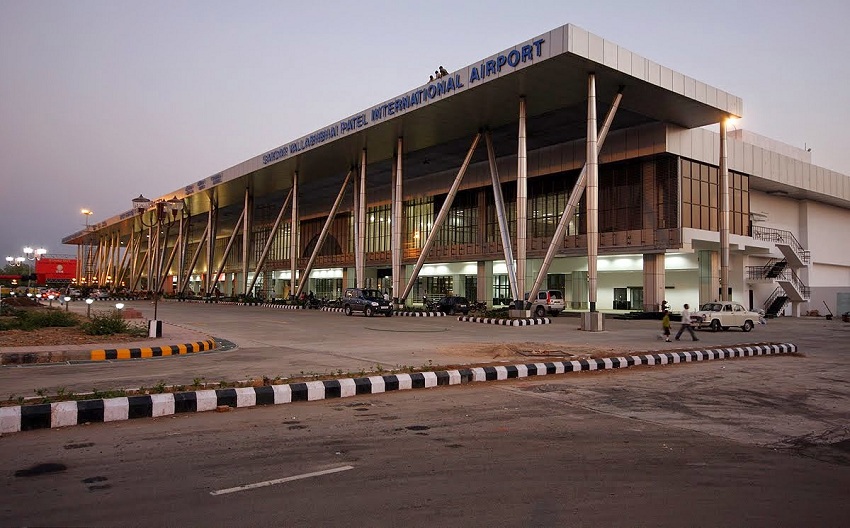 Ahmedabad Airport (AMD), also called Sardar Vallabhbhai Patel International Airport, after India’s first deputy Prime Minister, is the 8th busiest airport in the country. The airport serves Ahmedabad and Gandhinagar, located 9 kilometers north of central Ahmedabad, in Hansol. As per the statistics of the year 2016-17, the Ahmedabad airport catered to around 7.36 million passengers. It is well-connected to the major cities both national and international through major airlines.

There are four terminals at Sardar Vallabhbhai Patel International Airport (AMD) – Terminal 1 (T1), Terminal 2 (T2), a secondary traffic terminal and a cargo terminal. Terminal 1 is dedicated to domestic flights while Terminal 2 is for both domestic and international flights.

Domestic Terminal: Ahmedabad Airport Terminal 1 departures and arrivals are dedicated to domestic flights covering an area of 4,80,000sq.ft with 23 check-in counters. There are 3 gates and 3 x-ray baggage facilities in addition to other passenger facilities like restaurants, parking, transport, lounge hotel counters, etc.

International Terminal: Terminal 2 (T2) of the AMD airport is dedicated to international flights covering an area of 41,000sq.ft. The international terminal was inaugurated in July, 2010 and was opened for public in September, 2010.It had with a capacity of accommodating 1600 passengers in a single time. You will find 30 check-in counters out of which 14 are for arrivals and 16 for departures. There are 4 x-ray baggage facilities along with other facilities for the passengers like currency exchange services, car rental booths, food and drinks, restaurants, etc.

To transfer passengers from domestic to international terminal, there is an inter-terminal bus service provided on demand. You can also take the 1,640 foot moving walkway to connect from one terminal to another.

Connectivity to the city

Trains: Ahmedabad Railway Station is at a distance of 5miles from the airport. So if you want to travel to a different city. You can get local trains running within the city connecting around 15 local stations.

Buses: Ahmedabad Municipal Transport Service (AMTS) is a bus service running to and from the Ahmedabad Airport. You need to walk for about 10minutes to reach the bus stop (Sardar Nagar Approach) and you can easily get buses connecting to places in the city. The bus lines stopping by at the Sardar Nagar Approach include Bus line 16, 101, 105, 106, 107 and 126.

Taxis: There are prepaid taxi counters at the arrival area of both domestic (T1) and international (T2) terminals. You can easily find a taxi to reach the main city at reasonable costs. If you want to visit the places near Ahmedabad Airport, taxis are the most convenient option. Just make sure you negotiate the fare.

Car Rentals: Besides the comfortable taxis, you will also have the option of renting a car. There are some private car rental companies operating at the airport, of which you can reserve one that suits you best.

Ahmedabad Airport has car parking services for the visitors at both domestic and international airports. There is only one rate fixed for parking at the airport. The charge per hour is cheaper than long-term parking. If you are going to stay at the airport for long, the charges might be quite expensive. No matter visitors stay for 59 minutes of just 10 minutes, the parking fee will remain the same as it is calculated on hourly basis.

The Ahmedabad Airport has information desks at both the terminals with friendly and responsible staff on duty. The desk at the international terminal is referred as tourist help desk.

Communications and money: At Ahmedabad Airport, passengers get an access to a bank at both terminals along with several ATMs, a telephone booth, post office and currency exchange counter (international terminal). The ATM at the domestic terminal (T1) is towards the Approach road. Do check with you bank about the withdrawal limit and fee schedule, when travelling international.

Business and Conference: The Ahmedabad Airport map shows that there’s no dedicated business center. However, you can have the VIP area in the international terminal (T2) for any short business meet. If that doesn’t suit you, there are airport hotels at AMD like Sunset Comfort and Taj Residency. We have discussed more on this below.

Luggage: Passengers get baggage carts to move luggage for free at both the terminals. You can also get the facility of free luggage wrapping at the international terminal. Ahmedabad Airport luggage services also include lost and found service for the travelers.

Food and Drinks: If you see the AMD Airport India photos online, you will find a restaurant in Terminal 1. There are also snack bars at both domestic and international terminals along with tea and coffee vending machines.

Lounge: Ahmedabad Airport Lounge services include two lounges, one at domestic terminal (T1) and another at international terminal (T2). The one at Terminal 1 is BICA lounge and that at the departures of Terminal 2 is Port lounge.

Shopping: If you have some hours to spend at the airport, you can go for duty-free shopping at T2 Departures and Arrivals.

Medical services: Emergency medical support is offered to passengers for free to the passengers in need at both the terminals.

Other services: There are some other important services provided at the airport like spa & salon services (O2 on 1st floor of T1), pay-per-use massage chairs, mobile charging, etc.

Wi-Fi: Free Wi-Fi connectivity is available throughout the airport area.

If you have an overnight layover according to the Ahmedabad Airport flight schedule or have to sleep at airport for some reasons, there are good hotels nearby to provide you a comfortable sleep.

Hotel Airport Residency: It is also within walking distance from the airport. However you can reach the airport staff at Ahmedabad Airport contact number to ask for a shuttle.

Hotel R.J Residency: It is located at an easy walking distance from the hotel (thus the closest). If you are tired and want to book a taxi, it will cost your around 70-90INR one way.

Pristine Residency Hotel: This hotel is within a distance of 1 mile from the airport and offers free pick and drop facility to the passengers.

Vadodara Airport is located at a distance of 102 kilometers from Ahmedabad Airport. Though not among the prime airports in India, but it is well-connected with the major Indian cities like Kolkata, Mumbai, Delhi, Bengaluru and Srinagar.

Some of the common airlines operating domestic flights to and from Vadodara include IndiGo and Air India.

How many airports are there in Ahmedabad?

Does Ahmedabad airport have duty-free shopping?

Yes, you can find duty-free shopping stores near the T2 Departures and Arrivals area.

Does Ahmedabad Airport have lounge facilities?

There is one airport lounge called ‘The Lounge’ and it is located at Terminal 1 near domestic departures. Passengers can buy lounge passes and access the facilities at the Lounge.

What are Ahmedabad airport parking charges?

Ahmedabad Airport parking charge for the first thirty minutes for a car is INR 90 and it is INR 30 for a two-wheeler. It costs around INR 150 for car parking and INR 80 for two-wheeler parking for up to 2 hours and or every additional two hours after this, you will have to pay an extra 10 rupees for two-wheeler and 40 for a car.

Which airlines fly to Ahmedabad?

What is the distance between Ahmedabad Airport and Somnath Temple?

Somnath Temple is located at a distance of nearly 410 km from Ahmedabad Airport.