Two or more human beings speaking the same language build spontaneous connection between them. It is much true about expats on a foreign shore. Especially Indians living abroad get emotional and feel nostalgic when someone speaks to them in their mother tongue. This is what happened to a Tamil Indian in New York recently.

Arieh Smith, an American YouTuber and food blogger who is popular as Xiaoma, posted a video of his recent visit to three South Indian eateries, one in New York City and two in Jersey City. The video has gone viral garnering nearly 18 lakh views, 50000 likes and nearly 3000 comments from his followers, Tamilian NRIs and other Indians across the United States. His YouTube channel Xiomanyc has close to five million followers. 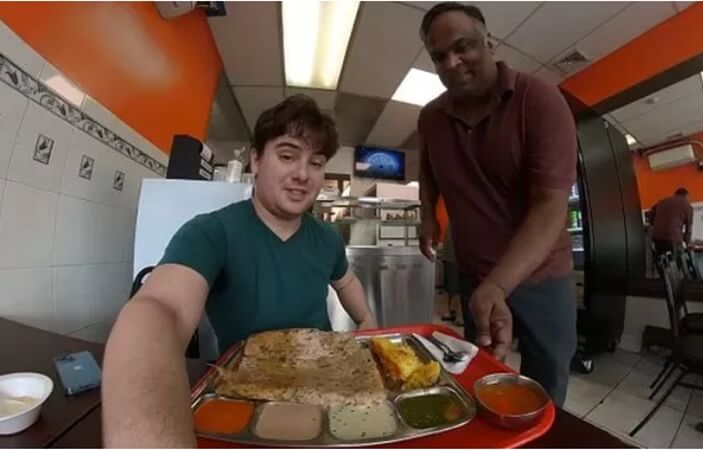 His quest for the best Tamilian food drove him from the Dosa Man of New York to two South Indian restaurants in New Jersey. The moment Xiaoma entered Chennai Dosa Express in Jersey City, NJ, he greeted the owner in Tamil. He said “Vanakkam” (a Tamil word meaning Hello or Namaste) to the restaurant owner, and his impeccable pronunciation impressed the latter. Thus, the American and the Indian got into a conversation in Tamil.

He ordered a plate of onion rava dosa in Tamil at Chennai Dosa Express, NJ. Rava Dosa, a dosa variant with low curbs and calories, is a popular dish in Tamil Nadu, Karnataka, Telangana, Andhra Pradesh and Kerala. He also asked for a glass of Jigarthanda, a cold beverage famous in Madurai, a temple town in Tamil Nadu. He was served a piece of crispy onion rava dosa with four different chutneys and a bowl of sambar on a platter. He explained that the meal was delicious and fulfilling.

When the YouTuber handed over his card to pay the bill, the Indian restaurant owner said, “It’s on the house, actually.” But the boy insisted on paying for the meal. The owner was so intrigued by his fluent Tamil that he hesitated to take money from him, as a feel-good gesture of Indian hospitality. It was like one of those rare moments that remind us of home when we are away from home.

Arieh Smith posted the video of his visit to the Tamilian restaurants in New Jersey with the description, “I’ve been fascinated with the Tamil language ever since I learned that it is one of the world’s oldest languages still in use. Spoken in both India and Sri Lanka it’s actually quite rare in America, but I was able to find some restaurants in and around New York City that are run by Tamil speakers and here’s what happened when I tried ordering in this ancient and beautiful but extremely challenging language. Definitely check these restaurants out by the way as they make some AMAZING food.”

Xiaoma’s fluent Tamil and the Tamil Indian restaurant owner’s hospitality have elicited warm response from Indians and Americans. An Indian named Yash Uday commented, “I’ve been taught Tamil since I was young but I couldn’t say some of the words you were saying. Also, my mom saw this video and she seemed so happy. Even though Tamil is so ancient language, it’s barely talked about. So, thank you for making a video about Tamil. I really appreciate it.”

Another Indian named Rooshhil Patel wrote, “My Fiancé speaks Tamil and well I don’t! I’ve tried learning the language for her but it’s EXTREMELY difficult even for an Indian who speaks Hindi and Gujarati. I’m blown away by how you can just pick the language up so quickly. You’ve inspired me to give it another go. Some tips on learning would be great!”

Travel Beats is a leading portal for Indian Diaspora in America by Indian Eagle, a most trusted travel-booking partner of Indians in the US. Subscribe to our free newsletter for community news/stories, and explore unbeatable deals from our airline partners for flights from USA to Chennai and other Indian cities.