Bollywood has traveled to the US capital for an exhibition, one of the most waited Washington DC events this year. The life-size wax statutes of popular Bollywood actors including Amitabh Bachchan, Shah Rukh Khan, Hrithik Roshan, Aishwarya Rai Bachchan and Kareena Kapoor have been put on display at the Madame Tussauds Museum in Washington DC. The display is part of the Bollywood Exhibition, which will continue till September 2016. 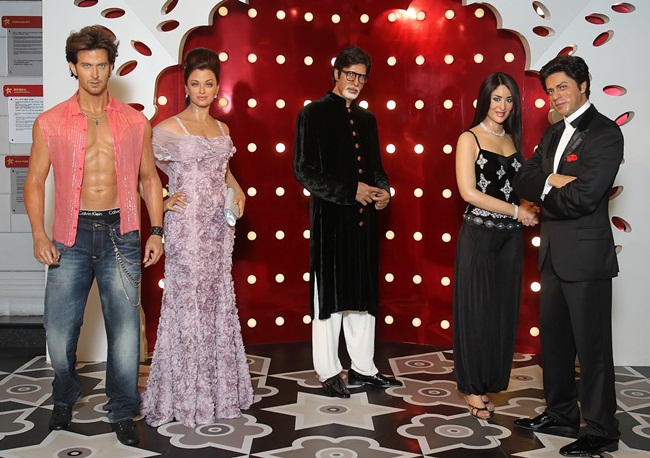 The wax statues of these Bollywood stars were not launched together. Madame Tussauds unveiled their wax figures at different times. That’s why the museum has put them on a tour to its locations across the world. The wax figures have recently been brought to Washington DC after an exhibition in London and New York.

Bollywood Exhibition is one of the next big Washington DC events for Indian Americans after the Holi festival celebration. A video featuring a team of artists from Madame Tussauds in the process of capturing facial dimensions, skin tone, eye shades and hair of those Bollywood actors will also be displayed during the exhibition.

Each of the wax figures is attired in the outfits inspired by what Amitabh Bachchan, Aishwarya Rai, Shah Rukh Khan, Kareena Kapoor and Hrithik Roshan had worn on different occasions in the past.

The lilac gown which Aishwarya Rai had worn for her head-turning appearance on the red carpet of Cannes Film Festival in 2010 has been recreated for her wax figure. The dress of Shah Rukh’s wax statue is inspired by the black tuxedo that he was seen wearing at the International Rome Film Festival in 2010.

The statue of the 63d National Award winning Amitabh Bachchan is dressed in a long velvet coat which the Indian superstar had donned at Salon du Cinema in 2009. The wax statue of Kareena Kapoor for the Bollywood exhibition in Washington DC features a black outfit that she donated during her first meeting with the artists from Madame Tussauds. Hrithik himself donated a pair of faded jeans and an unbuttoned sleeveless red shirt for his wax figure.

Madame Tussauds in Washington DC has already kicked off the exhibition of the wax statues of Indian film stars. It will continue till September 2016. Don’t miss it! – IndianEagle

Travel Beats is a digital portal by IndianEagle for Indians and Indian Diaspora. IndianEagle, a leading US-India travel organization, publishes interesting stories and news about travel, culture, events, festivals and entertainment from India and USA.