While India is divided in its opinion about the significance of building the world’s tallest statues of mythological and historical figures, Indian Americans are all set to worship the tallest statue of Lord Hanuman at a Hindu temple in the United States. In the chilling winter of January 2020, tens of Indian families gathered and cheered the arrival of a 25-feet granite statue of Lord Hanuman in Delaware from the Indian state of Telangana. 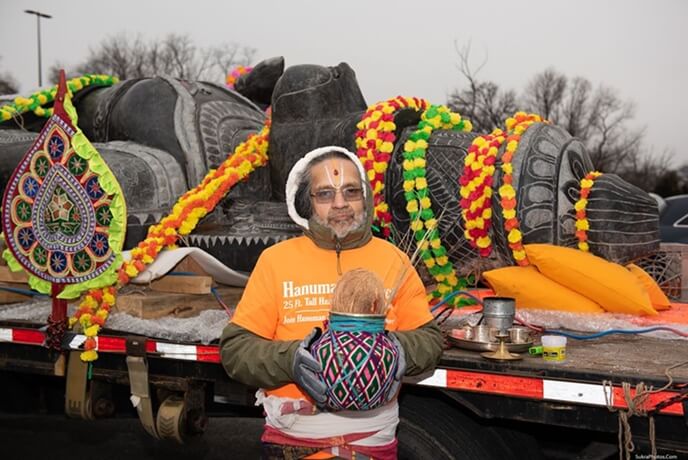 Though India is home to the tallest statues of Hanuman, this is the first time Delaware has become home to the United States’ tallest statue of a Hindu god. India’s incredibly tallest Hanuman statues are the 176-feet Madapam statue in Srikakulam and the 135-feet Paritala Anjaneya statue near Vijayawada in Andhra Pradesh. The only tallest statue of Lord Hanuman outside India is in North America. It is the 50-feet Mangal Murti Hanuman idol in Ontario, Canada.

Titled the Hanuman Project, the ceremonious consecration of the 25-feet idol was recently held at the Hindu Temple of Hockessin, Delaware. The statue commands awe for not only its height, but also its weight of over 45,000 kg. It was carved out of a single piece of granite stone and sculpted meticulously in India over a year. More than 12 full-time artisans worked together to carve out the monolithic statue for one year in Telangana’s Warangal, a historical town known for ancient temples of black granite.

Indians in Delaware had been yearning for a life-size statue of Lord Hanuman since the ground-breaking ceremony was held for the Hockessin temple in 1996. Though Goddess Mahalakshmi is the presiding deity of the temple, lord Hanuman will be worshiped with equal reverence there. “Towering statues of Lord Hanuman are enshrined and worshiped across India, and we are glad to follow the tradition in Delaware,” said the president of the Hindu Temple Association.

Following the consecration of the United States’ tallest Hanuman statue, Delaware’s Hindu Temple of Hockessin joins the ranks of popular Hanuman temples in USA, including California’s Panchamukha Hanuman Temple in Torrance, California’s Sankat Mochan Hanuman Temple at Mount Madonna Center, and the Hanuman Temple of North America in Maryland. Hanuman, the principal devotees of Lord Ram, is a god of strength and best known as Sankatmochan Mahabali.