While eight Indian American teens are undergoing a summer internship in the US Congressional offices in Washington DC, new faces from the Indian-origin youth brigade are emerging in the race for hot seats of policymaking for the growth and progress of their respective US states and cities. 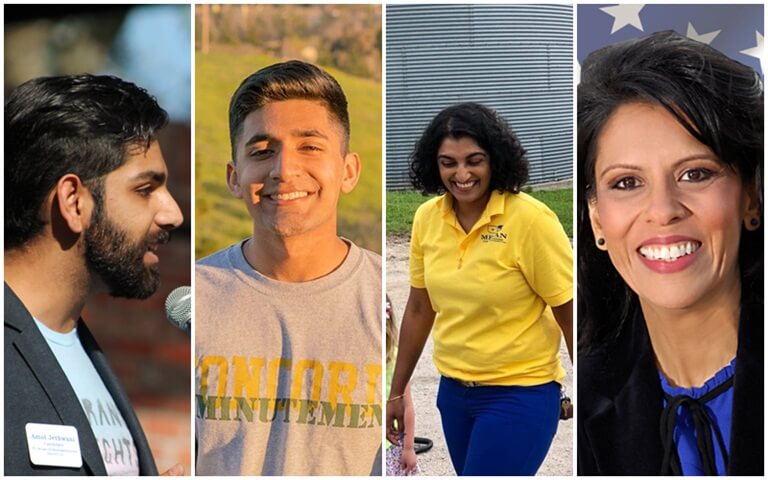 From the Indian American youth brigade on a mission to transform the socio-political landscape of the US, Amol Jethwani is running for a seat in the Florida State House. A fourth-year student of political science at the University of Florida, Amol Jethwani announced his candidacy from the 21st Legislative District of the state. Endorsed by the Indian American Impact Fund, Amol is a leading campus activist and a progressive Democrat.

If elected for a seat in the Florida State House, he will champion the education-related causes for a better future of Florida’s economy. He has proposed to mitigate the concerns about the state’s environment, education, and healthcare. Reformation of gun laws in Florida, sustainability of natural resources and assurance of equality to all are some of the priorities on his agenda. If elected, Amol Jethwani will be the first LGBTQ Indian American to serve in the Florida State Legislature.

Younger than 22-year-old Shubham Goel who announced his candidacy for the hot seat of California Governor this year, Indian American Aasim Yahya is looking to become the next state assembly member in the 14th legislative district of California. A high school graduate from Concord, Aasim finished second with 7,608 votes in the June 7 primary election. If elected, he will represent the youth and voice the concerns of ‘common man’ above the chatter of politicians. He will increase civic participation and resolve the bipartisan issues, in addition to ensuring environmental safeguards and prison reforms as per his agenda.

Having been a student advocate for the past four years, Aasim Yahya has worked towards equalizing educational and leadership opportunities in Concord, CAL. He also chaired Little Girl, a nonprofit and served on the board of Make-A-Wish. He believes that his fundamental attributes – leadership, awareness and integrity – will help bridge between the citizens and the policymakers.

Indian American Dr. Megan Srinivas is a promising Democratic candidate seeking a seat in the Iowa House of Representatives from the 9th Legislative District. She is all set to run against Republican Ann Meyer in the November general election. Endorsed by the Indian American Impact Fund, Dr. Megan Srinivas has proposed to remove disparities in the allocation of health resources by facilitating affordable and accessible healthcare for all. A resident of Fort Dodge in Iowa, she will make the city a better place to live by ensuring good jobs with better wages.

With an MPH degree from Harvard University and a medical degree from the University of Iowa, Dr. Megan Srinivas has dedicated her career to reforming the healthcare system of the state. She was the first to represent students on the Iowa State Board of Education. She also initiated a community effort named ‘Presents of Hope’ and continued it to provide basic commodities to the children and women at YWCA homeless shelter in Fort Dodge.

Indian American businesswomen Aparna Madireddi is running of a seat in the city council of San Ramon in San Francisco Bay Area, with her agenda full of plans to make San Ramon an ‘inspiring, enterprising and sustainable city.’ She announced her candidacy at the San Ramon Community Center in May this year. Aparna Madireddi is said to be have a good understanding of what the city needs to be safe and progressive. Preservation of open spaces for outdoor activities, upgrading of public safety systems, and eradication of communication gaps between the citizens and the city council are some of the priorities on her agenda. She has already been lauded as an ‘earnest and enthusiastic’ representative of San Ramon, California.

Indian American Harry Sidhu is running for the seat of Mayor in Anaheim City, California. A former councilman and mayor of Anaheim, Harry Sidhu came to the United States with only $6 in my pocket. He graduated from Drexel University and became an aerospace engineer. He got US citizenship in 1979, and then he plunged into a small business. He made his foray to the Anaheim City Council for two consecutive terms from 2004 to 2012. If reelected, Harry Sidhu will focus on improvement of open spaces, roads and small businesses in Anaheim, California. His agenda also includes a potential solution to the rising homelessness in the city.

Among the upcoming Indian American policymakers and leaders in the United States is Raj Shukla, who has jumped into the race for Mayor of Madison, Wisconsin. The executive director of River Alliance of Wisconsin, this Madison Mayor candidate has proposed to ensure affordable housing for the underprivileged and improve the city transportation system. Having an unflinching belief in the power of community work, he is also committed to work on climate change. Previously, he developed youth education programs to train elected officials in mobilizing and leveraging resources for the progress of Madison.

Also Check: These Indian American Teens are Leadership Interns in US Congress