Sridhar Vembu, a US-returned software tycoon with a net worth of $3.75 billion, has once again created an exemplary model for reverse migration of talent to the rural and semi-urban pockets of India from the saturated IT corridors. Known for empowering the rural youth and initiating rural welfare programs, he is setting up offices in rural areas of Tamil Nadu; while multinational conglomerates are adding bricks and mortar to concrete jungles against climate emergency. 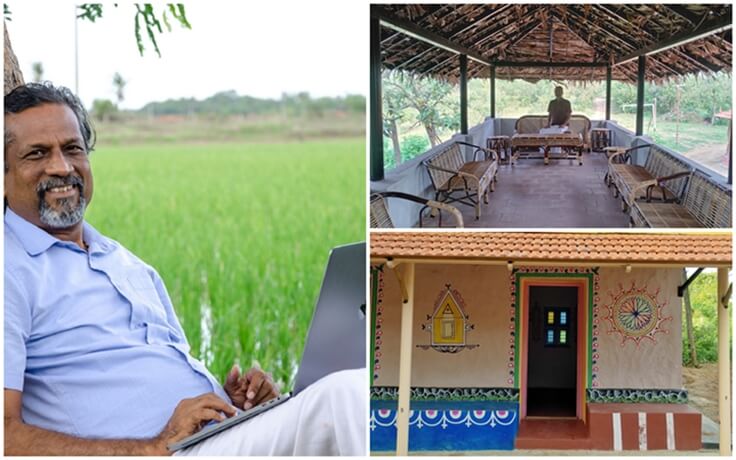 The founder and CEO of Zoho Corporation, Sridhar Vembu recently tweeted pics of a rural office built with mud, straw, palm leaves, and limestone. Unlike multi-storied offices with glass facades and central air conditioning, Zoho Corporation’s rural offices in India have mud walls, thatched roofs, minimal interior décor, and eco-friendly cane furniture. Despite having no AC, the inside of the brand-new office is comfortable even on a hot day. The conference room is a stark departure from the corporate glamor.

His tweet ends with the message, “I love it so much I have made it my office’. Interestingly, this is one of the 30 such setups in rural areas with proximity to tier 2 and 3 towns. Each of the rural offices can accommodate minimum 30 people. He wrote in another tweet, “We need committed local leadership to make our rural offices work.” Zoho Corporation headquartered in Chennai and Austin, is operating a research and development office under the shed of a small farm in Gopalasamudram, a village in Tirunelveli district of Tamil Nadu, with a team of 15 engineers working on Zoho Analytics.

Nicknamed ‘barefoot billionaire’ for his simple living amid the bliss of nature and away from the modern trappings of city life, Sridhar Vembu had opened the first rural office in 2011 in his native village Mathalamparai in Tenkasi block of Tirunelveli district. Currently, about 500 is the employee strength of the Zoho rural office in Tenkasi which is home to ancient temples and waterfalls.

Building a network of rural offices accessible from tier 2 and 3 towns, where employees could work and stay close to their homes and family without spending a large chunk of their salary on monthly bills, had been part of his vision for years. But his plans were set in motion only after the pandemic made work from home a new normal. The pandemic having rewritten the rules of the working space made it cost-effective for both employers and employees to work from home or a place nearby home. That’s why Zoho Corporation’s rural work centers had occupancy 4-5 times more than that at the headquarter office in Chennai after the first wave of the pandemic receded.

Reportedly, Zoho CEO Sridhar Vembu who received Padma Shri in 20021 is replicating the same model with a different approach in the US and European Union. Early this month (April 2022), he set up a new Zoho office in McAllen, Texas where 25 talents were hired from the local community, thereby supporting local economy. The Rio Grande Valley in South Texas has been home to Zoho’s first office in the Lunar State since before the headquarters was shifted to Austin from California in 2020. The opening of an office in a small and less-populated city like McAllen is a testimony to Sridhar Vembu’s commitment to bringing work opportunities to where employable people are, instead of forcing them to join the crowd in metropolitan cities where the cost of living increases every fiscal.

A PhD alumnus of Princeton University, New Jersey; he is driven by his commitments to giving back to rural India. He offered free tuition to the poor children in his native village, whose access to school was cut off due to the nationwide lockdown in the wake of the pandemic. He pledged to build a rural school startup that would ensure seamless access to quality education and nutritious food for underprivileged children in rural areas.

This article is part of our continued series of stories on reverse migration and reverse brain drain to India. A subsidiary of IndianEagle.com, a trusted air-ticketing partner of Indians in America for business class travel to India; Travel Beats reports on Indian Diaspora, aviation, immigration, visas, and US-India travel.