The 2017 Pravasi Bharatiya Divas (PBD) in Bangalore concluded over positive notes on the role of youth in transforming India. An annual global convention for leading overseas Indians, it culminated in felicitation of 30 NRIs with the Pravasi Bharatiya Samman Awards, India’s highest civilian honor for the Indian Diaspora, by Dr. Pranab Mukherjee, the President of India. 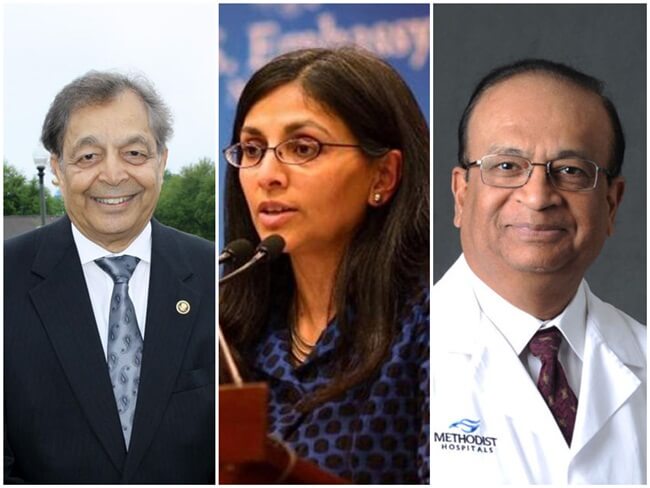 Among the Pravasi Bharatiya Samman awardees in 2017, Dr. Sampat S. Shivangi is a renowned Indian American leader. A street in Mississippi is named after him in recognition of his contributions to the progress and welfare of the community. He was the first Indian American to be appointed for the top health post, the Chairman of the Mississippi Department of Mental Health, in 2014. Dr. Sampat Shivangi was the advisor to the US Secretary of Health and Human Services in the presidential regime of George W. Bush. He is the founder and president of the American Association of Physicians of Indian-origin in Mississippi. The CEO of US Info Systems of Mississippi, he is one of the trustworthy confidantes of Prime Minister Narendra Modi.

One of the recipients of the Pravasi Bharatiya Samman Awards, India-born and Chicago-based Dr. Bharat Barai is the director of oncology department at Methodist Hospitals in Indiana. He got a mention in the Guinness Book of World Records as the longest serving member of a State Medical Licensing Board in the US. He is a community activist and philanthropist too. He treats uninsured, disadvantaged patients and works to reduce medical expenses for them. Known for his unconditional community services, personal integrity and professional excellence, Dr. Bharat Barai is also in Prime Minister Narendra Modi’s coterie of close associates.

Another Indian American awardee of the Pravasi Bharatiya Samman, Dr. Mahesh Mehta is the founder of Vishwa Hindu Parishad of America. He also founded the Hindu Heritage Foundation of America, Friends of India Society International, India Quality Group and several other organizations. He has many widely published articles on socio-cultural, socio-economic and socio-political aspects to his fame. ‘Hindu Philosophy in Action’ is the latest from Dr. Mahesh Mehta’s repertoire of books and journals. Dr. Mehta is a cofounder and director of Hindu University of America in Orlando, Florida.

Nisha Desai Biswal is an Assistant Secretary of State for South and Central Asian Affairs among the six Indian American recipients of the Pravasi Bharatiya Samman Awards 2017. She helms the United States’ foreign policies and external affairs in India, Bhutan, Nepal, Sri Lanka, Maldives, Bangladesh and other countries in central Asia. Under her distinguished leadership, the US Department of State ensures and enhances human security and national security in south and central Asian nations. Based in Washington DC, Nisha Desai Biswal leads the US’ bilateral consultations with Central and South Asia to deepen ties with those Asian nations.

The Pravasi Bharatiya Divas is a unique platform for Indian Diaspora to engage with Indian government, explore investment opportunities in India, seek chances of contribution to the economy of India, and discuss the issues of concern with Indians abroad. The power of Indian youth was the theme of the 2017 Pravasi Bharatiya Divas in Bengaluru City.

The 2017 Pravasi Bharatiya Divas came to an end with Nisha Desai Biswal’s acceptance speech on behalf of all the awardees.