The list of Seattle Indian Events in October 2017 is a splendid mix of religious festivals, cultural events, live concerts and comedy shows. Indians in and around Seattle will get together and have a nice time over Diwali shopping, Karwa Chauth celebration, Karthik Kumar’s comic take on tragic aspects of life, violin concert, Falguni Pathak’s dandiya & raas garba among others. We at Indian Eagle have detailed some of the best events from the calendar of October 2017 for Indian Americans in Seattle Metropolitan area. 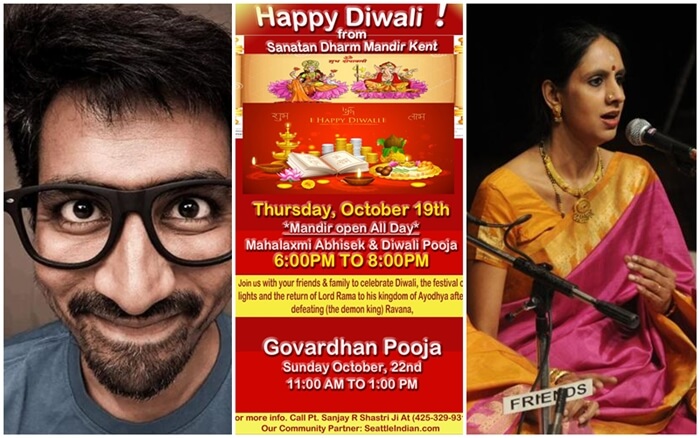 Grand Diwali Bazaar is a one-stop destination for Seattle Indians to shop for Diwali 2017. Undoubtedly this is one of the best Indian Events in Seattle in October 2017 to get whatever you need to celebrate Diwali traditionally away from India. Hosted by Lifestyle Trade Shows Inc, it offers a great merchandise of traditional Indian clothing, arts & crafts, gold jewelry, festive home décor and heena along with lip-smacking food choices and entertainment for the whole family. Bellevue College is the venue of LTS Grand Diwali Bazaar 2017 on October 7.

Sanatan Dharm Mandir is one of the best places for Diwali celebration in Seattle. The Sanatan Dharm Mandir Diwali 2017 is scheduled on October 19 in Kent, WA. Many Seattle Indians have already marked October 19 on their calendar of Seattle Indian events in 2017. This Kent Hindu Temple in Seattle is known for its traditional celebration of Diwali. The temple will also hold Govardhan Pooja on October 22.

The hangover of Navaratri on Indians in Seattle will be continued with Falguni Pathak’s Dandiya & Raas Garba Live show on October 13 at Bellevue Community College in Bellevue, WA. Hosted by UTSAV, the Falguni Pathak Dandiya event is undoubtedly among the best Indian events in Seattle in October 2017. Falguni Pathak’s dandiya and raas magic will surely add to the delight of Diwali celebration for Seattle Indians.

Through this Indian event in Seattle in October 2017, Rajasthani Caravan aims to promote and preserve the cultural heritage of Rajasthan.  The Diwali Lights of India Seattle Rajasthani Caravan will exhibit the kaleidoscopic beauty of Rajasthan through a display of colorful costumes, devotional folk songs, spinning dance of snake-charming tribes, traditional instruments, and likes. Hosted by Katrina Ji and Rajasthan Canvas, this socio-cultural event is scheduled on October 21 at The Armory of Seattle Center in Seattle, WA.

Among the upcoming Indian events in Seattle in October 2017, Suravi is a must visit for those who miss India in USA. Hosted by Antara School of Indian Classical Music, Suravi is a unique melange of strings and tabla exploring the intensity and subtleties of Ragas and Talas. Suravi features renowned artistes: Pandit Tarun Bhattacharya (Santoor), Indrajit Banerjee (Sitar) and Subrata Bhattacharya (Tabla). Suravi will be held at Lakshmi Venkateswara Temple on October 1 in Redmond, WA.

Get ready for a roller-coaster ride full of fun and laughter in October since stand-up comedian Karthik Kumar is all set to enthrall you with his comic take on familiar nuances of life. Titled Blood Chutney, this stand-up comedy show is supposed to make you believe that whatever is tragic in life is a stimulant for positive thinking. Hosted by Global Media, Karthik Kumar’s comedy show Blood Chutney will prove to be one of the best Indian Events in Seattle in October 2017. It will be held at IKEA Performing Arts Center, Renton, WA on October 14.

Carnatic Vocal Concert by world renowned musician sisters Ranjani and Gayathri will be enthralling Indian Americans with their mesmerizing Indian classical music. Touted as one of the best Indian Events in Seattle in October 2017, this Indian American concert is hosted by SVETA LV Temple. The Carnatic Vocal Concert by Ranjani Gayathri will be held at Lakshmi Venkateswara Temple on October 07 in Redmond, WA.

Ganesh Rajagopalan’s violin concert will definitely add to the variety of Indian events in Seattle in October 2017. Hosted by the Anindo Chatterjee Institute of Tabla, the Ganesh Rajagopalan Violin Concert  for music lovers will be held at Eastside Bahai Center, Bellevue on October 14. Ganesh Rajagopalan and ensemble include Srivani Jade, Ravi Albright and more.

Travel Beats, a leading Indian American community portal by Indian Eagle, publishes the latest travel, tourism, visa, immigration and community news. Indian Eagle, a leading travel partner of Indians in USA, is known for booking air tickets to India from Seattle and other cities in Washington at the guaranteed lowest fares.