The month of August is full of celebrations for Indians in Seattle. We at Indian Eagle filtered a long catalogue of Indian events in Seattle in August 2017 and selected five out of the best based on popularity. These five events for Desis in Seattle include a musical play, a Bollywood Independence party, a religious event and a couple of cultural programs, which are detailed below: 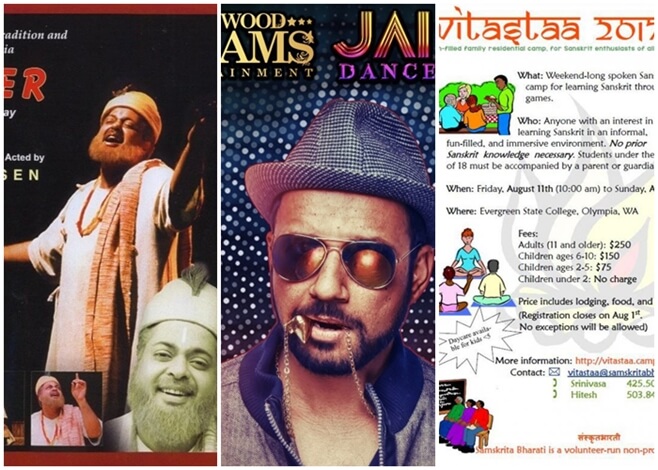 Indians in Seattle are all set to witness the musical extravaganza by Shekhar Sen on August 11 and 12 at Bellevue Hindu Temple in Bellevue, WA. Soordas and Kabeer is a musical mono act play depicting the story of these great poets. It is one of the best Indian events in Seattle in August 2017 as it will be a great opportunity for Indian Americans in Seattle to submerge in the divine grace of musical glories sung on Lord Krishna.

The Jai Ho! Independence Bollywood Party 2017 will take place at The Crocodile, Seattle, WA on August 12. Get ready for one of the most exciting Indian Events in Seattle in August 2017! Hosted by Dj Ki & Prashant, you can dance all night to the best of Bollywood and EDM music. Their collaboration is sure to rock Indians in Seattle. The doors open at 9 pm and will last till 1:45 am. Come dressed in Orange, White & Green attire or a traditional festive attire to celebrate India Independence Day with the multi talented and Bollywood entertainers. You can’t miss it!

The festival of Krishna Janmashtmi is considered as one of the best Indian events in Seattle in August 2017. The Sanatan Dharm Mandir in Kent welcomes all Seattle Indians to celebrate the birthday of Lord Krishna. Special attractions of this event are “The Jhankis”, Rock the cradle and make a wish. It is believed that anyone who makes a wish while rocking the cradle will come true. After midnight, the devotees can enjoy 56 varieties of devotionally offered Bhog to Lord Krishna as Mahaprasad. This Krishna Janmashtmi festival will take place at Sanatan Dharm Mandir in Kent, WA on August 12.

Vitastaa is a fun-filled family residential camp for Sanskrit enthusiasts of all levels. Touted to be one of the best Indian events in Seattle in August 2017, this weekend long event is designed for people with an interest to learn Sanskrit. The Vitastaa is scheduled to take place at Evergreen State College in Olympia, WA from August 11 to 13. No prior Sanskrit knowledge is required and students under the age of 18 must be accompanied by a parent or a guardian.

Wicked Karma is a creative venture between friends. Their passion for Bollywood and unending artistic vision lead to the launch of Bollysutra, Seattle’s staple Bollywood party. Wicked Karma is celebrating Bollysutra’s 4th year anniversary at Club Contour in Seattle, WA on August 12. This is considered as one of the best Indian events in Seattle in August 2017. For those who want to party real hard, this is the place. Go have fun and remember to drink responsibly and don’t drink & drive.

Travel Beats, a leading Indian American community magazine by Indian Eagle, publishes the latest travel, tourism, visa, immigration and community news apart from listing upcoming Indian events in US cities. Indian Eagle is a trusted travel partner of Indians in USA for booking their cheap flights to India from Seattle and other US Cities.